The winner of the 50 Best BBVA Scholarship 2019 – an initiative that identifies and nurtures upcoming talent in the culinary world, for which entries are open now – will have the chance to hone their skills by doing stages at three world-renowned restaurants: Odette in Singapore, Core by Clare Smyth in London and Quintonil in Mexico City.

The founder and chef of Odette in Singapore, Julien Royer has been mentoring young chefs for almost a decade. A new entry at No.28 in The World’s 50 Best Restaurants 2018 list, Odette thrives on teamwork and collaboration. We speak to Royer about how he has supported the talent in his team and how he plans to welcome the scholarship recipient in 2019.

At just 36 years old, Julien Royer may be young, but there is more to the chef than meets the eye. When he opened his first restaurant, Odette, inside the National Gallery Singapore in 2015, he had already developed a strong reputation as head chef of nearby Jaan – but his star was still only rising. Over the next three years, Odette was met with enduring acclaim by critics and diners worldwide, earning the title of The Best Restaurant in Singapore at Asia’s 50 Best Restaurants 2018.

For Royer, as for many other chefs, the key to success is the team. Odette’s sous chef Yeo Sheng Xiong has been learning from Royer for five years, a period that he considers extremely rewarding. "The chef always encourages us to innovate and push ourselves. The results may not always be what we were hoping for, but he is supportive and gets us thinking about other ways to approach a problem,” he says. “He puts a lot of trust in us and gives us ownership in what we do. This really motivates us."

For the opening of Odette, Royer brought with him Adam Wan, with whom he had worked at Jaan and who has now grown into a senior sous chef. Wan was a key team member in the opening, assisting with the initial research and development and contributing to the conception of Odette’s first menu.

Wan met Royer soon after starting his career and has now been mentored by the chef for seven years. “I learnt to always see challenges as opportunities,” he says. “I also learnt that it’s important to stay humble and to keep learning from the person you are working with.” 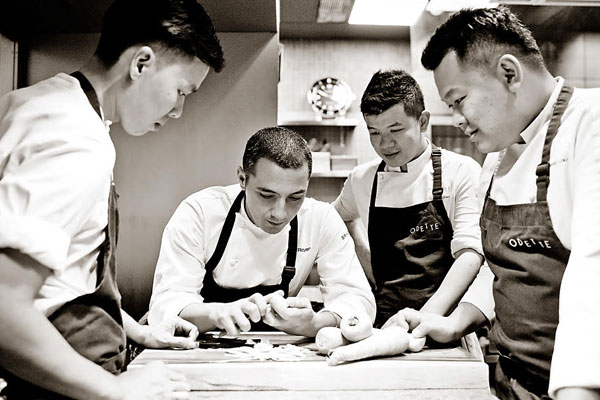 For Royer, mentoring isn’t only an exercise in leadership and teamwork, but also an important opportunity to stay on his toes and to keep innovating. “Mentoring allows us to stay on top of our game, as we need to stay sharp and be comfortable with all the things we are teaching and explaining,” says Royer. “We have to keep learning about trends, techniques and the whole ecosystem beyond the kitchen, from our producers to our guests.”

In terms of training, Royer explains that he likes to get his protégés started by nailing the basics. The chef began his career in his native France, where he honed his skills on the classics before moving to Singapore in 2008. Despite the geographical distance, classic French cuisine is still very much at the heart of his work, and he focuses on teaching this to the interns and young chefs that pass through Odette’s kitchen.

“I like to teach them to love and recreate classics such as pithivier, lièvre à la royale or ballotine,” says Royer, adding that his aim is to make the young cooks better than him at creating the dishes. The chef learnt to make these classic French preparations when training under legendary chefs Michel Bras and Bernard Andrieux in France at the beginning of his career.

“Maître Cuisinier de France Bernard Andrieux grew my love for the classics and helped me form a strong foundation in the basics. Chef Michel Bras has had a great influence on my journey as a chef, also in how he created a culture of mutual respect within the team and valued everyone from the very bottom to the top,” says Royer. 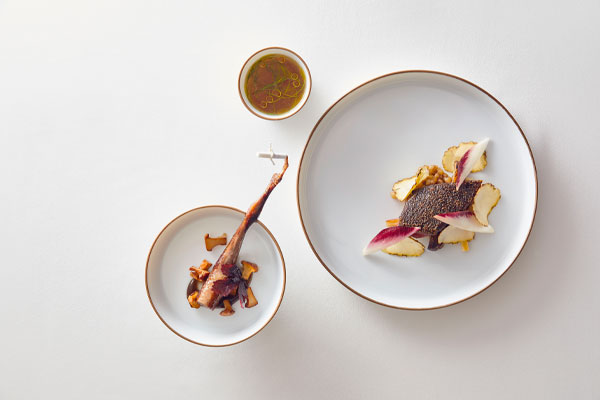 When working in a high-pressure environment like a restaurant’s kitchen, Royer believes that the most important qualities a young chef needs to have are ‘passion, respect for the produce and taking the time to build relationships with producers’. The advice that he would give to an aspiring cook is to be patient and persistent, as excelling in the kitchen can be hard work – but it pays off.

As well as Wan and Yeo, Royer has also been mentoring senior sous chef Levin Lau for eight years. The chef speaks with pride of his protégés. “The three of them are quite different, but all have grown incredibly over the past years,” he says. “Growing as an individual always has its challenges, but even more when growing as a team. It’s much harder when everyone has to find their spot, their comfort zones and challenge zones, their ambitions and targets without pushing others aside. It’s quite amazing that they have grown so much in abilities and chemistry over the years, complementing one another.”

When the recipient of the 50 Best BBVA Scholarship heads to Odette for his or her stage next year, Royer hopes to pass onto them some of the values he learnt from his grandmother, after whom the restaurant is named. “Growing up as a fourth generation farmer in my hometown of Cantal meant that we were always out on the farm growing produce and tending to livestock,” he says. “I spent a lot of time in the kitchen with my grandmother Odette. She was the one who taught me that respect for seasonality and products goes beyond any kind of food philosophy.”

Now, Royer is looking forward to meeting the aspiring cook who will join his kitchen for six weeks in 2019. “I am incredibly excited to be part of mentoring the next generation of great chefs. It's always fantastic to have fresh energy in the team and I hope that we will be able to give them a very unique learning experience here in Singapore, the crossroads of the world.”

Applications to the 50 Best BBVA Scholarship 2019 are open until Wednesday 19th December to chefs with less than three years’ experience in a professional kitchen. Apply now on the Scholarship portal and read the interview with Jorge Vallejo and Alejandra Flores, the team behind Quintonil, to find out how they’re planning to inspire the new generation.