This week sees The World’s 50 Best Restaurants release the next edition of its mini-documentary franchise, 50 Best Explores. Two teams of chefs travelled to Ontario, Canada to explore the city of Toronto and surrounding regions. Watch the trailer for a taste of what’s to come

After exploratory missions to Thailand, Macao and Peru, 50 Best Explores has its crosshairs levelled on Canada. 50 Best chefs Ignacio Mattos and Sam Lawrence of Estela in New York joined up with JungHyun ‘JP’ Park of Atomix, also in New York, for a five-day edible journey around the finest produce that the province of Ontario has to offer. After landing in Toronto, they split into two teams, with one heading south east and one south west of the city to meet up with local cooks and tour the farms, producers and wineries that fuel the city’s burgeoning restaurant scene. The convened in Toronto for the final leg. Here’s what to expect from the three journeys.

The chefs from Estela were joined by Forbes magazine journalist Laurie Werner to head off into the Canadian countryside to taste the region's produce in its purest form. Heritage crops, traditional farming methods and field-to-fork production are the focus of a food scene that is looking back to its roots to influence its future. The farmers tell the inspiring stories that inform their growing, with plenty of time to taste the fruits of their labour.

With landscapes to rival Bordeaux and viniculture to match, the rolling hills of South West Ontario are home to Canada’s finest wines. JP from Atomix took to the countryside with food and drink writer Virginia Miller to sip their way round the top estates and producers and discover the story behind the country’s famous ice wine. On the way, they learn that the terroir is perfectly suited to more traditional grape varietals, too.

After exploring the produce that supplies it, the two teams returned to the provincial capital Toronto to sample its restaurants. With a multicultural food scene heavily influenced by ex-pat communities, the city is fast rising up on the radar of in-the-know gastronomes. For breakfast, the groups made a bee-line for Ontario Honey Creations, followed by lunch at legendary local chef Laura Maxwell's Le Select Bistro. On the menu was a fine incarnation of the produce from King Cole Ducks, where Mattos and Lawrence stopped by on the first day. Bar Raval, which is widely considered Toronto's best cocktail bar, made a fitting spot for nightcap where the teams swapped stories about their respective adventures. 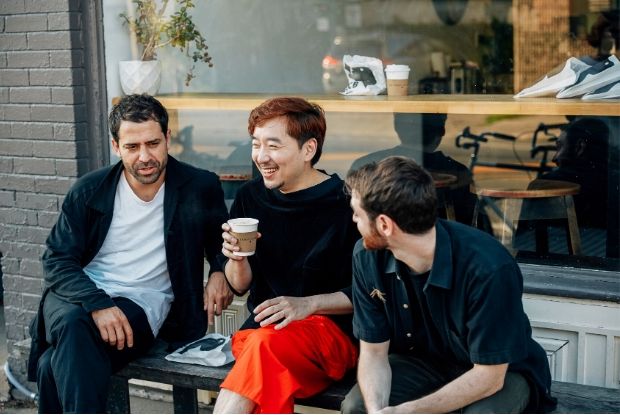 Mattos, Park and Lawrence take a coffee break in Toronto