Fabrizio Fiorani is the Tokyo-based cook who was recently named Asia’s Best Pastry Chef 2019, sponsored by Valrhona. Fiorani’s imaginative desserts, served at Il Ristorante Luca Fantin and across Bulgari’s Tokyo and Osaka hotels, reveal the chef’s heritage, ethos and inspiration. From his native Italy to how he sees the creative process, discover the man behind the artistry.

Meet Fabrizio Fiorani’s desserts: a tiramisù made into glasses frames that alternate a thin layer of chocolate, a sweet mascarpone cream and a cookie base, perched on a red nose that resembles the chef’s. Petit fours in the shape of Italy; an apple pie served upside down. The pastry chef says that the current generation eats with the mind, and his desserts hold true to this philosophy.

“Food is always associated with an emotion or with a certain memory,” he begins. “We are a generation that is never hungry. There is an availability of services and disposable income that allow us to eat at any time, whatever we want, compared to what could have happened 50 years ago.”

It follows that food needs to do more than just satiate hunger, and indeed Fiorani’s sweet creations don’t only pay service to the taste buds – they are designed to tickle the imagination, awakening feelings and memories in the diner through presentation and nods to his home country. 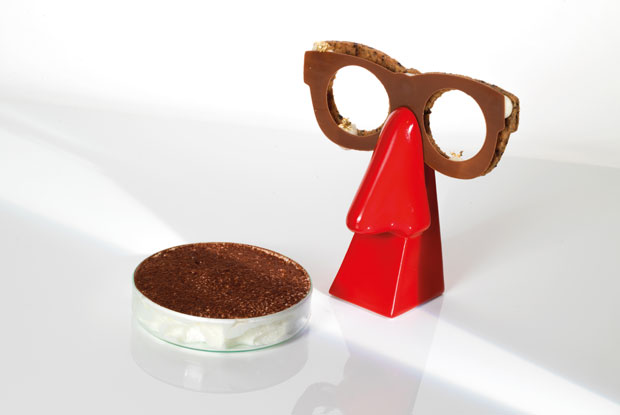 He claims that a pastry chef’s strength is found in his or her limitation: there are only four spoonfuls to capture the customer, so all the flavour and creativity must be expressed within these boundaries. He also says that desserts can make or break a meal – a mediocre meal followed by a great dessert might leave you with a positive memory of the restaurant, but a fantastic meal that ends in a forgettable dessert will negatively impact the overall experience.

Fiorani, who has been based in Tokyo for the last six years as pastry chef at Il Ristorante Luca Fantin, takes this responsibility very seriously. His motto, inspired by an Oscar Wilde quote, is that “There is nothing more necessary than the superfluous” – and his desserts have not only become an essential part of the dining experience at the restaurant, but have also earned him the title of Asia’s Best Pastry Chef, sponsored by Valrhona, at Asia’s 50 Best Restaurants 2019.

“You don't have to make the best desserts in the world to win this award, you have to make desserts that are perfect for the kind of experience that you want to give, which in our case is that of fine dining, contemporary Italian cuisine,” he says. This idea of authenticity is fundamental to his philosophy. ”People come to our restaurant because they want to eat our idea of pastry or cuisine, they don’t want to eat what is most in vogue, or the most exclusive or expensive ingredient.”

How Fiorani talks about the Asia’s Best Pastry Chef award says something not only about the man, but also about his craft and his journey to get here. “If we take this prize and divide it into percentages, I would say that 20% is mine, 20% belongs to Luca Fantin, and 60% goes to our team.” He makes the point that his team is more important than him, because “my hands are here, but my team is in Tokyo making my desserts”. 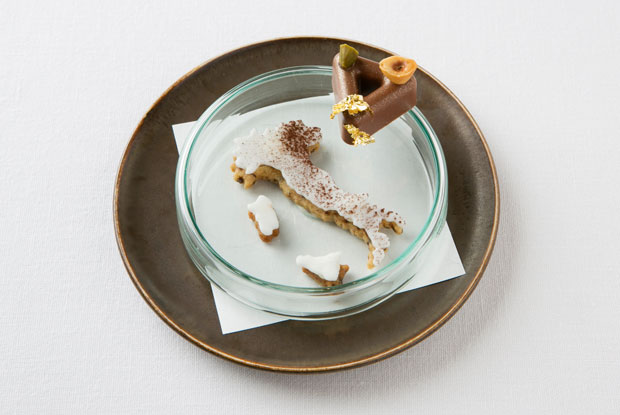 With his brigade of seven at Il Ristorante Luca Fantin, Fiorani has a collaborative approach. Everyone in the team tries each new dessert, adding their own touch during the development process. As well as the desserts, when Fiorani and Fantin are working on the restaurant’s tasting menu, they try it in its entirety, ensuring that the main courses flow into the desserts seamlessly.

Fiorani fell in love with desserts in his native Rome when he was just a teenager working at a local gelateria. “I was lucky to grow up surrounded by cream, eggs, chocolate and sugar,” he says. “I love ice cream, it’s genius. The idea that through this little spoon you get all the sweetness and this is the essence of any dessert.”

Through experiences at renowned restaurants in Italy, starting at La Posta Vecchia Hotel near Rome, then Il Pellicano in Tuscany and La Pergola back in Rome, he quickly rose through the ranks. Thinking back to his training, he says that the reason he was able to grow and improve was that he didn’t stay comfortable for too long. 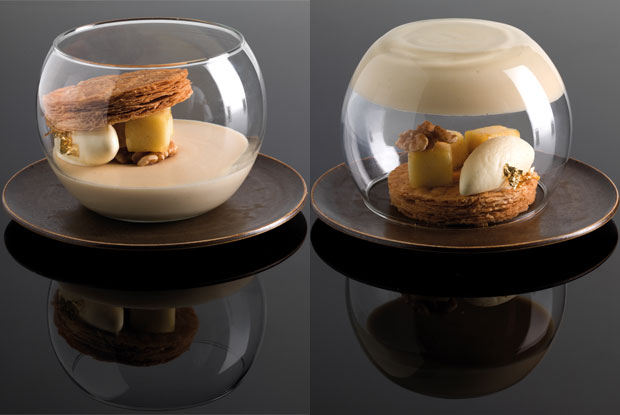 It was this desire for new challenges that led him to move to Tokyo, first working with La Pergola’s chef Heinz Beck at his first restaurant in Japan, then joining Luca Fantin’s restaurant at the Bulgari Hotel. Fiorani shows deep gratitude to Fantin, saying that without the trust that the chef gave him, he wouldn’t have been able to develop his creativity the way he has.

“Creativity and ideas cannot evolve with the fear of making mistakes, or with the need to demonstrate something. Instead, with unconditional trust you can achieve even these results,” he says, glancing at his Asia’s Best Pastry Chef Award.

Fiorani is also quick to add, however, that it’s not all down to creativity. “If 20% of all ideas are due to intuition, it is equally true that the other 80% arrive thanks to a creative method. There is work, study and research behind it, it’s not just inspiration,” he says.

Ultimately, the dessert serves one simple purpose in Fiorani’s mind: “Taste is the first objective, but it is also the last piece. If you put the last piece in the wrong place, the whole tower falls. We can build the tower with all the philosophies and arguments in the world, but if in the end the dessert is not tasty, it’s wasted time.”

Linking together the ideas that desserts satiate a craving beyond hunger, his creative philosophy and collaborative approach, Asia’s Best Pastry Chef takes his drive and enthusiasm from a simple motivation. “I don’t make desserts for exclusivity, or to demonstrate the value of this award, my techniques or even my ideas. I make desserts to try to give a little happiness to customers.”

Header images: one of Fiorani's creative desserts and the pastry chef receiving his award at Asia's 50 Best Restaurants 2019