Congolese chef Dieuveil Malonga is giving a voice to culinary professionals across Africa to promote the continent’s diverse food cultures, while also moving education forward through his restaurant and school in Rwanda. 50 Best profiles the first of its Champions of Change award winners for 2022, whose mission is to help realise Africa’s outstanding gastronomic potential

When Dieuveil Malonga jokes that his friends call him “the guy who doesn’t sleep”, you are immediately inclined to believe him. Having turned 30 in 2021, the Congolese has already found time to live in Germany, compete in Top Chef in France, visit 50 different countries in the African continent, create the Chefs in Africa online platform and open a restaurant-cum-cooking school in Rwanda. Something, clearly, had to give…

But like most people with a goal, Malonga is not one to dwell on his past achievements. His mind lives in the future, intent on preparing the continent for the moment he is certain is coming in the next decade. “We need to be ready,” he says with his signature broad grin. “In five to 10 years, the world will come to Africa. We must be ready with our hospitality to give them amazing memories and promote the food cultures within our continent.”

One thing is certain: should Africa’s big break on the world culinary stage come any sooner, Malonga will be on the list of people that world-famous African chefs will thank in their speeches. Over the last 10 years, his selfless dedication to empowering the new generation of cooks across the continent has been second to none. A unique cocktail of life experiences, coupled with contagious enthusiasm and charisma, has led him to where he is today. 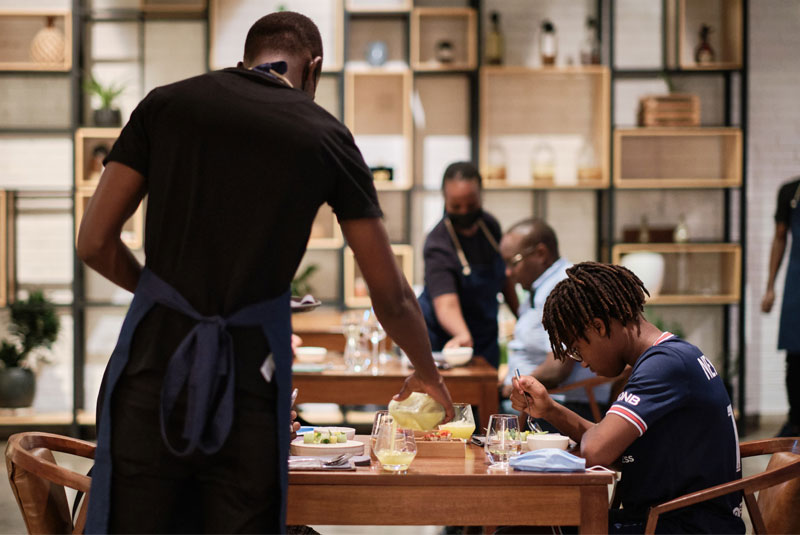 Inside Malonga's restaurant in Kigali, Rwanda

Born in Congo in 1991, Malonga became a young orphan after his father was killed in a political conflict and his mother died of an illness. At 10, he boarded a flight to Cologne in Germany to join his older sister, who had built herself a life in Europe. At first, young Malonga didn’t like Germany – it was cold and, he would complain to his grandmother over long-distance calls, the food wasn’t good.

But in the German education system, people are offered the chance to choose a vocation while they are still teenagers and Malonga jumped at the opportunity: he wanted to become a chef. “When I was 12 and I started to know how to cook my own food, my ambition became to open my own restaurant. But my dream was always to open a restaurant in Africa,” he recalls.

While studying gastronomic arts, Malonga started bringing back ingredients from his holidays in Congo, experimenting with them in the school’s kitchens and unknowingly planting the first seeds of his cooking style. In the following years, through internships and work experiences in Germany, he didn’t only gain experience, but also a new incentive. “I met many African people working in restaurants, but most of them were dishwashers or cleaners. That gave me motivation to show the world that given the chance, there was much more we could do,” he says.

The opportunity presented itself in 2014, when Malonga qualified to take part in the French edition of TV competition Top Chef. As he honed his Afro-fusion style during the programme’s shoot and started to earn a following in France, he also became inspired to understand Africa more deeply. And so, in 2016, he decided to take some time to reconnect with the continent of his birth.

Meet Malonga in the video:


Bringing Africa’s potential into the light

Malonga isn’t one to do things in half measures. When he realised he needed to learn more about his culinary heritage, he undertook the task with ardour: to date, he has travelled to 50 of Africa’s 54 countries, visiting local farmers, learning from village matriarchs and meticulously cataloguing his findings.

“In so many countries in Africa, eating is not simply a daily act – it’s a celebration. It goes into the medicinal and spiritual fields. I discovered that people really value food. For them, meals are the best time to talk about anything.

“I also learnt from the advice of the grandmothers I met. They told me about how their grandfathers would eat only what grows in the local area, because your immune system is connected to the environment. Today, we eat fruit from Cape Town and fish from Norway, while we talk about going back to eating locally. But people were already doing that before. All that advice helped me do the work I’m doing now,” he says.

Champion of Change: Dieuveil Malonga in a nutshell
Cause: Promoting African culinary heritage by empowering cooks across the continent
Effect: Connecting young cooks with opportunities and trainings; educating a new generation of chefs to become ambassadors for African food cultures
Achievement: Connecting 4,000 food industry workers through the Chefs in Africa platform; creating a blueprint for an educational restaurant model
What’s next: Moving Meza Malonga to rural Musanze to expand its chef training programme
Final word: “We need tolerance, advice, exchange and open minds. We must try to collaborate and communicate through food. Many chefs and tribes in Africa know how to cook, but don’t know how to communicate their food. Now, the world wants to know what they’re eating.”

“The ambition was, first of all, to connect people,” he explains. “Then, we started to help young cooks write their CVs in English and French. But then we realised that there was a lack of skills preventing people from working in international restaurants, so we started to organise workshops. The first was in Ivory Coast in 2017, then we went to Ghana and many more places. That was the key for Chefs in Africa: [in order] to shine a light on the continent’s amazing cuisines, we realised we had to shine a light on its chefs.”

Today, the Chefs in Africa online platform counts over 4,000 members. The first effort of this scale in the continent, it has helped connect scores of culinary professionals with training opportunities, job offers and scholarship schemes, and has given many more the tools and the confidence to chase the dream of pursuing the culinary profession. The project earned Malonga international attention, including being selected as a finalist for the Basque Culinary Prize in 2018. But the chef, still a hopeful teenager at heart, had another dream he needed to chase. 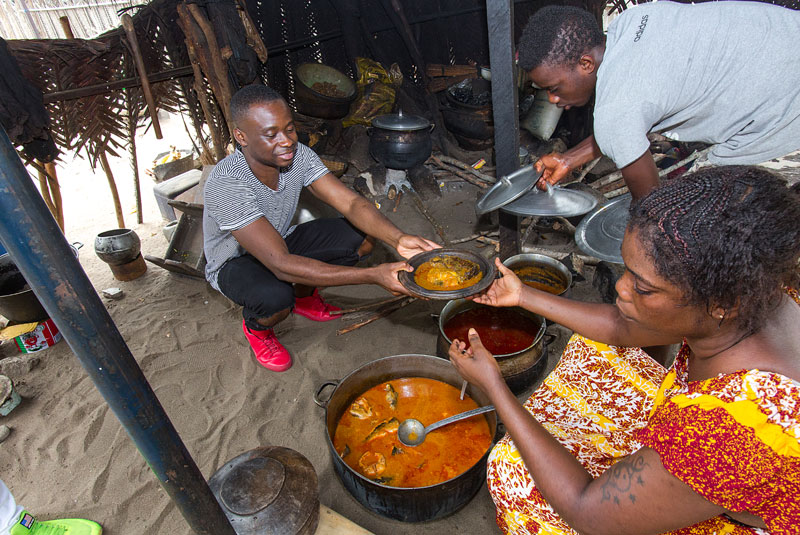 Malonga has travelled extensively across Africa

Nurturing the next generation of cooks

Having visited Rwanda during his travels, Malonga picked the lush land-locked country in the Great Rift Valley of Central Africa as the place to start the next phase of his mission. “When I was travelling across Africa, the grandmothers always brought me to the farm first. I understood that for them, mise en place starts at the farm, because if your product is good, you don’t need to do many things to it. But if it’s bad, it’s just bad, no matter what you do,” he says.

He bought a piece of land in the rural region of Musanze, rented a space in the Rwandan capital of Kigali and, in 2019, started recruiting cooks in the city. For a year, Malonga farmed and taught, building the foundation of his restaurant until, in early 2020, Meza Malonga held its first service.

“Most of my team had never been to cooking school, so we started from scratch,” he recalls. “My ambition was to create a training system, a ‘learning by doing’. I had never done it before in my life, but I was teaching them English, French, and cooking and hospitality skills. But all you need is a base. If someone is passionate, they can take that small base and transform it.” 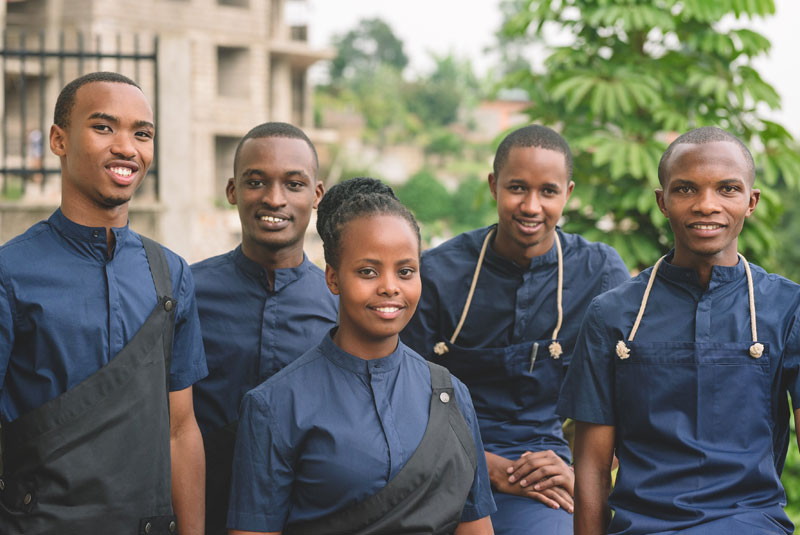 Some of the team training and working at Meza Malonga

Through the opening-and-closing cycles dictated by the pandemic, Meza Malonga kept going. The cooks progress through a comprehensive training programme that includes farming, garde manger, sauces, fish and meat and, finally, the most important step: learning how to understand and teach others. For Malonga, this is essential – he wants to create a chain where the chefs he trains can train others and keep the process going.

While serving the mission of empowering young cooks, Meza Malonga also fulfilled the chef’s life-long dream of having his own restaurant. Here, he could put his Afro-fusion concept into practice, combining local ingredients with spices from all over Africa, and the recipes he learnt from grandmothers with the techniques he mastered in Europe.

“The ambition for Meza Malonga is to take old recipes and forgotten produce and give them a new life, to show that this is the future,” he shares emphatically. The 10-course seasonal menu is continuously tweaked by the chef and his team, who may use local mushrooms to make bouillon, play with the flavours of Rwanda’s dozen bean varieties, or find new uses for traditional ingredients such as plantain and cassava. 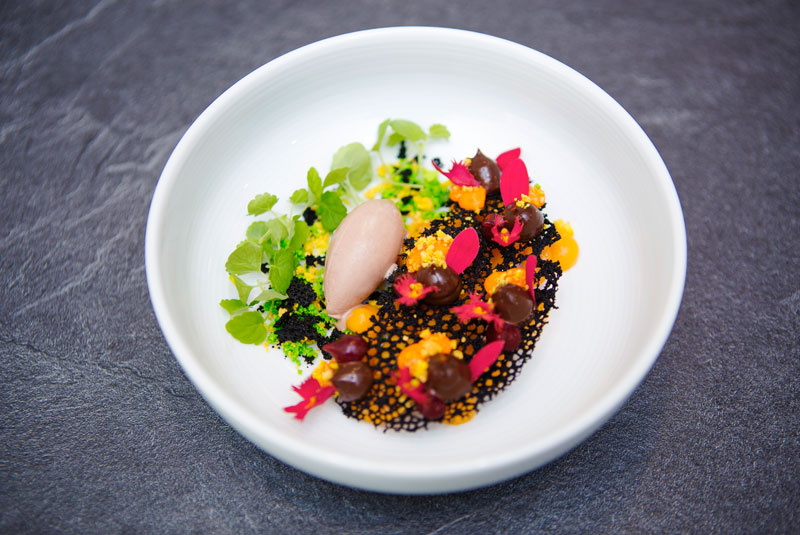 A dish from the restaurant's seasonal tasting menu

It was while at his farm in Musanze – Malonga’s happy place – that the chef began to dream of a new goal. “I was born in a village, so I was reconnecting myself,” he says. “I realised that was the real me. I’m not the city guy, I’m the village boy.”

This is his next frontier: an expansive new site for his restaurant and cooking school, this time surrounded by tomatoes, sweet potatoes and taro instead of skyscrapers and offices. The new home of Meza Malonga will feature more spaces to teach, allowing the chef to expand his training programme to up to 20 cooks, and a food education centre showcasing local ingredients, which will be open for diners to visit.

Malonga sees this as the beginning of a movement to create sustainable tourism and development in the Musanze area. “When we open here, maybe in two to three years, people will come to this little village. We will work with farmers to create a Musanze brand of coffee and sell it at a good price. If people start coming and buying it, then maybe we can build a hospital, and then a school. This is the future of the business and also of food tourism, because if you want to eat something different and unique, you must go to the villages,” he says. 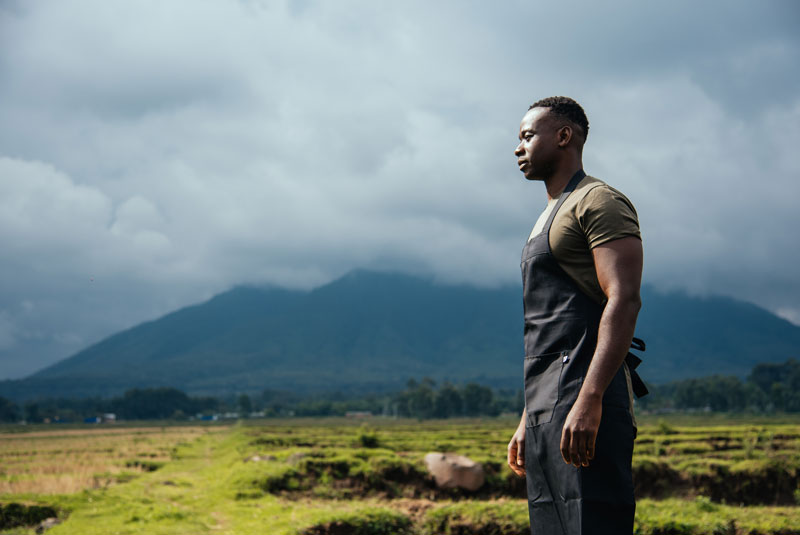 While working on this project for his dream restaurant, Malonga is also turning his talented hand to writing. He has two books in the works, one focused on African food culture before colonisation, and another about the Musanze region, its ecosystem and produce.

Still living in the future, Malonga cannot wait for the next phase of his mission, which will be supported by a donation as part of his Champions of Change Award. “Here in Africa, we have everything,” he says. “We have healthy food, we have amazing diversity – what we need is to learn how to communicate about it. That’s what we’re trying to do with Chefs in Africa. It’s a small project, but we’re trying to make it amazing, so that others can follow the example.

“From the rest of the world, we need exchange, openness and tolerance. We must be open to other food cultures and we must try to collaborate and communicate through food. Many chefs and tribes in Africa know how to cook, but don’t know how to communicate their food. Now, the world wants to know what they’re eating. That’s the work I’m doing – we must show what we have and give opportunities to chefs. We must be ready.”


Champions of Change recognises and celebrates unsung heroes of the hospitality sector who are driving meaningful action and creating blueprints for a better world. It is part of The World’s 50 Best Restaurants 2022 awards programme, sponsored by S.Pellegrino & Acqua Panna, and the evolving 50 Best for Recovery initiative.