When he first visited Thailand in his twenties, Australian chef David Thompson was enchanted by the country, the culture and some of the cuisine, but he had “a dilettante’s understanding of Thai food”.

Thirty years later, he has earned a reputation as one of the great Thai cooks in Asia, and this month added the Diners Club Lifetime Achievement Award 2016 to his string of accolades, but he still can’t resist his local street-food favourites when in Bangkok.

Here he talks us through his top foodie picks.

Apsorn’s Kitchen, also known as Krua Apsorn, just up from the National Library, is a great place to go. It’s an unprepossessing place: bright, neon-lit and functional but full of Thais. I always try to get there when I’m in Bangkok. 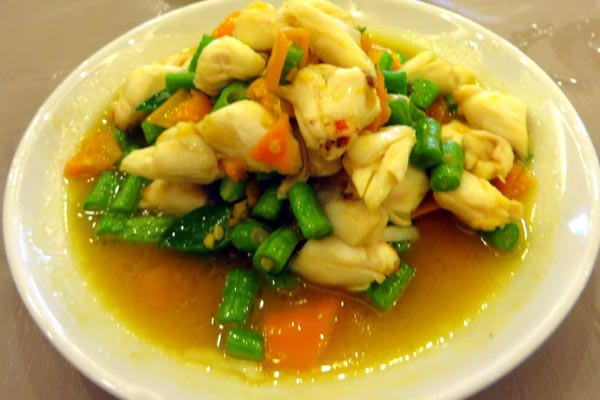 What to order: They have the best stir-fried crab in curry powder, and the deep-fried kingfish with green mango and the yellow curry with prawns and lotus shoots, clear, tart and spicy, an exemplary lesson in honed balance. You’ll have to get there early to get this curry but it’s worth the effort. I also like the stir-fried pork with oyster sauce and crunchy garlic.

How to find it: Krua Apsorn is located in the northern older part of the city, not too far away from the Vimanmek Palace. It opens from midday until 7pm, Tuesday to Saturday. 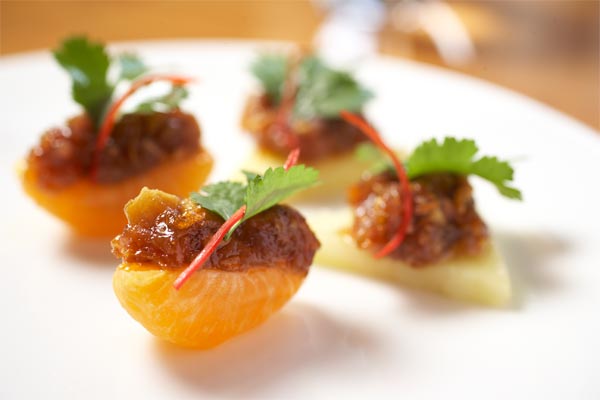 A taste of Nahm: Ma hor

I have two favourite street restaurants at the moment, one next to the other on Plaeng Naam Road just near the intersection of Charoen Krung in Chinatown. At this first one you should just have the one dish, however irresistible the rest are, because the nearby shop has some of the nicest street food in Bangkok.

What to order: The oyster omelette is one of the best renditions I’ve had: a crisp and rich base of eggs topped with an unctuous sauce of oysters and spring onions. Sprinkle it with some white pepper and splash over the siracha chilli sauce and you’ll understand why the place has been going for 40 years. They sell other dishes but I have never been able to forego this pearl.

How to find it: Nai Mong Hoi Nang Tort is the name of the shop house but the locals know it as the oyster omelette house. Non-locals should look for the two mirrors on the wall and the dark smoky pan sticking out onto the street. It’s closed on Mondays and opens Tuesday to Sunday from lunchtime until about 8pm. 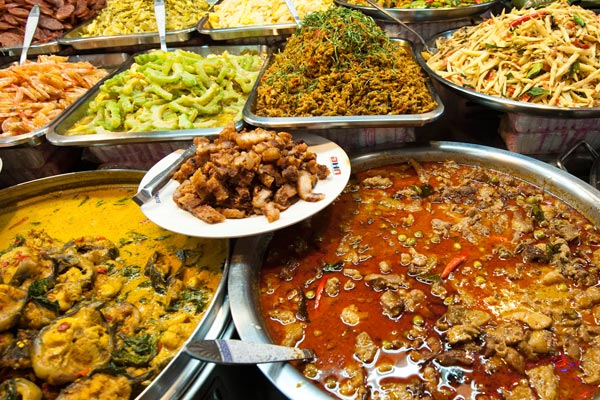 I don’t think it can be called a restaurant, it’s just a shop front with the kitchen at the back and a table filled with various raw ingredients and plastic chairs and tables spilling along the pavement and onto the streets. It’s a casual and easy place that is so typical of the Sino-Thai food of the street, various trays of dishes sitting on ice; squid, scallops, crunchy pork belly along with Chinese broccoli, garlic chives and snow pea shoots. There is no menu but none is expected. It’s called Raan Kao Dtom Jaesuay and it’s open seven days a week from 5pm until late.

How to order: Point to the ingredients you want to eat and they’ll tell you how they cook it – crunchy pork with Chinese broccoli, squid with snow peas, bean curd with Chinese sausage.

What to order: I always order the smoked duck. I know of no other place in Bangkok that serves this very local dish – it’s prepared in the nearby Dtalart Gao market – where it is salted and smoked over sugar cane to result in the  most delicious mahogany coloured bird. I love it. You should also try the minced pork with Thai olives and the little mussels fried with chillies and coriander.


Go behind the scenes with David when he opened the doors of Long Chim to the chefs of Asia's 50 Best Restaurants:

Find out the new list of Asia's 50 Best Restaurants 2016 on Monday 29th February – tune in for the live countdown on Twitter and watch the livestream from 8pm Bangkok time (GMT+7).