Meet the couple behind A Casa do Porco, which debuted at No.39 in The World’s 50 Best Restaurants 2019 and serves 10-course tasting menus at $33 a throw

There is no three-month wait for a table, no advanced payment system and the most expensive item on the menu is a 10-course tasting at 125 reais, or $33. It may be one of The World’s 50 Best Restaurants, but A Casa do Porco is not exclusive – it serves 16,000 customers per month and is determined to remain accessible. In fact, owners Jefferson and Janaina Rueda say that fine dining at popular prices is the future of gastronomy in Brazil.

Since its opening in 2015, A Casa do Porco, meaning House of the Hog in Portuguese, has been a runaway success in downtown São Paulo, in a neighbourhood not previously known for high-end food. A no-reservations policy means there are often four-hour queues, something that started at Janaina’s own casual bar-restaurant, O Bar da Dona Onça, which they opened together in 2006. But the Ruedas aren’t tempted to raise prices.

“Jefferson is bringing access to fine dining at popular prices, that’s why he has four-hour queues,” says Janaina. “We feel strongly that we mustn’t gentrify the area. There are a lot of homeless people around here, it’s a hub for sex workers and cross-dressers, and we need to look after these people, not push them out. All our restaurants have a very strong social mission. There’s a lot we can do through gastronomy.”

It’s not just the prices that are accessible; it’s the food too. In December 2018 they launched a more down-to-earth degustation inspired by popular food, including Janaina’s own version of the Brazilian national dish, feijoada, a stew containing pork, its offal and black beans. There are no smears, foams or spherification, just tasting-sized versions of pork crackling, roasted aubergine parmigiana and six-hour roasted pork with all the trimmings. All meat comes from pigs that roam freely while grazing on whey and vegetables in Jefferson’s hometown of São José do Rio Pardo. 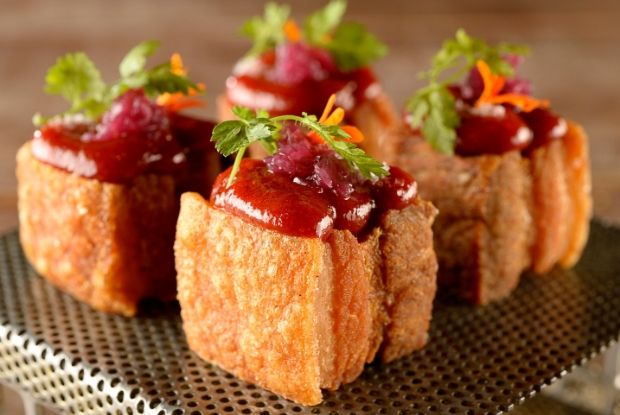 “If you live on the minimum wage and have two children, you either eat industrialised products or you go hungry,” says Jefferson. “Our mission is to give people access to good food, even if it means making less money.”

Aside from A Casa do Porco and Dona Onça, the couple also own Hot Pork, a fast-food kiosk selling organic hotdogs in biodegradable packaging for $2, ice cream shop Sorveteria do Centro, and a lab within the iconic Copan building where they work on new ideas and host chefs including Ferran Adrià. Their next opening, by 2021, will be Mercearia da Cidade, a bakery and grocery store selling healthy, organic versions of Brazilian household favourites such as yoghurts, charcuterie, bread and sweets. The idea is to turn their small corner of central São Paulo into a gastronomic hub for all.

While Jefferson is better-known internationally (he did a stage at El Celler de Can Roca and fronted Attimo, which entered Latin America’s 50 Best Restaurants list at No.32 in 2013), Janaina is a fundamental part of the business and its democratic approach. She grew up in downtown São Paulo and worked here from the age of 12, later learning to cook from Jefferson when she opened Dona Onça. She became a people’s champion, campaigning for healthy school meals and creating a menu that benefited 1.8 million school children – a project that has since been scrapped by the new government.

In contrast, Jefferson grew up on a farm in the São Paulo countryside, where he and his brother kept a calf as a pet. From the age of seven, he was cooking simple food for his own lunchbox, but he hated school, so he left to become a bricklayer. After an embarrassing mistake when he brought the wrong cut of beef home for his father, he decided to retrain as a butcher. He then studied at a local branch of the Culinary Institute of America and moved to São Paulo city at 19.

The couple met when Janaina worked as a sommelier and ambassador for Pernod Ricard and Jefferson was head chef at upscale Italian restaurant Pomodori. “He was so shy, he took six months to even say ‘hi’ to me,” she recalls. Pomodori was Janaina’s first introduction to fine dining and she says she felt uncomfortable with the idea of serving food to an exclusive group of people. “I believe in inclusive gastronomy; I’m a woman of results,” she says. “I never believed in serving the few. So when we got married, we expanded Pomodori.” 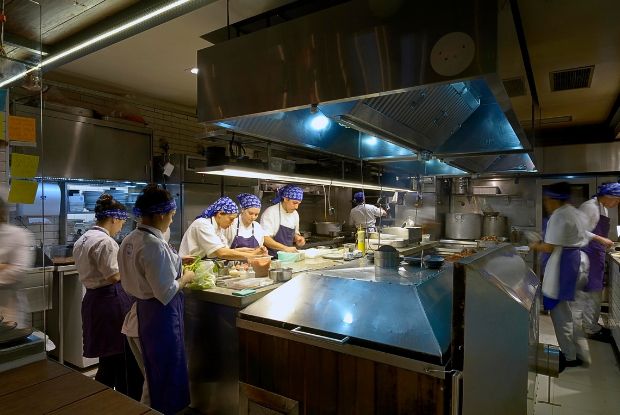 The engine room of the São Paulo restaurant

By the time Jefferson achieved international acclaim at Attimo, the pair had two young children (now 10 and 13), and he barely saw his sons. He left the restaurant and opened in the centre, allowing him to work within five minutes of his wife and their home.

Between their four businesses, they now serve around 30,000 people per month, and while many restaurants in the 50 Best lists are passion projects that don’t make money, both A Casa do Porco and Dona Onça turn a profit. The chef says he can afford to keep prices low because of the high volume and the fact that the restaurant opens 365 days year, from noon until midnight.

“The world is going to have a lot more mouths to feed, so how are we going to adapt? I’m looking at future nutrition, thinking more and more about sustainability,” says Jefferson. “I really have to roll my sleeves up and work hard, but this is the future of gastronomy that I believe in.”

Catch up on the highlights from The World's 50 Best Restaurants 2019 events in Singapore: