Header image: Dan Barber and guest chef Raymond Blanc brief the team at one of the wastED dinners


Dan Barber is worried. Earlier today, his team has been scavenging the Selfridges Food Hall for leftover and damaged foodstuffs to use at the wastED dining series on the rooftop of the iconic London department store. Barber has taken a sack of salt-beef ends from the 50-year-old heritage salt beef bar The Brass Rail and he’s concerned the owners will find out how good it tastes and take it back.

“It’s the best bit,” he says, as he places carrot-stick-shaped ends of juicy meat into taco-sized crepes made from pig’s blood and off-grade bran for his Salt Beef Ends Burrito. “I’m scared they’ll find out.”

The unwanted meat cuts aren’t the only thing Barber and his team have taken from the Food Hall. In their menu at the month-long wastED pop-up, they’re using everything from leftover barista milk in sauces to stale cupcake crumbs in their ice cream, and it’s all to help educate chefs and the public on inventive ways to cut food waste. 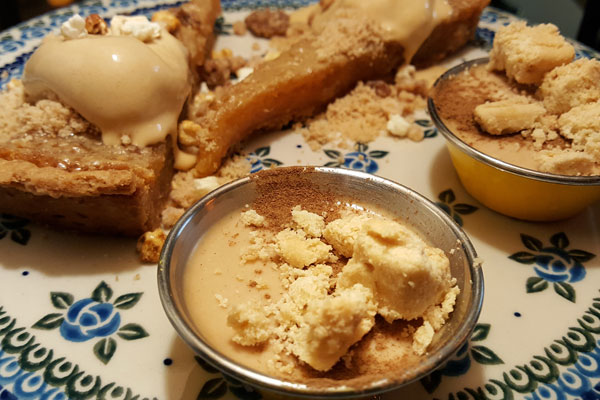 
Barber has spent a lifetime researching agriculture and food systems. As chef-owner of Blue Hill at Stone Barns in Pocantico Hills, New York, and author of The Third Plate, a book on ethical eating, he is more than qualified to teach Londoners that the commonly discarded pulp from their spiralizer or juicer is still perfectly good and that they should be cooking every part of the broccoli, not just the florets.

But the chef isn’t interested in preaching about ugly fruit and veg, or stuff that’s past its expiry date. He’s more concerned with starting a conversation about food culture and helping people to realise that eating protein-centric meals every day of the week is a wasteful approach to food and agriculture. He cites a recent BBC study that revealed that 55% of the wheat grown in the UK goes to feed animals.

“That’s nuts,” he says. “That’s the thing that built western civilisation and it’s being diverted away from people’s plates into animals and then we’re eating the animals, which is just about the most inefficient thing you can do.”

One of the dishes that Barber has put on his menu in a bid to counteract waste in the farming industry is ‘rescued’ veal nuggets. That’s ‘rescued’ because they’re made from male bull calves from dairy farms that are usually shot at birth because they’re seen as a drain on the dairy’s economy.

“The males are drinking milk but they don’t produce milk and if that’s the case then it’s a real loss. With dairy, the margins are so thin that you can just kill them right away – what’s the point?” he says.

Barber asked a Welsh farmer to save six male bull calves, which were then raised on mother’s milk and put to pasture, before being made into the breaded nuggets on his menu at Selfridges. The same farm is providing him with pigs that are fed 100% on waste from restaurants in the area. 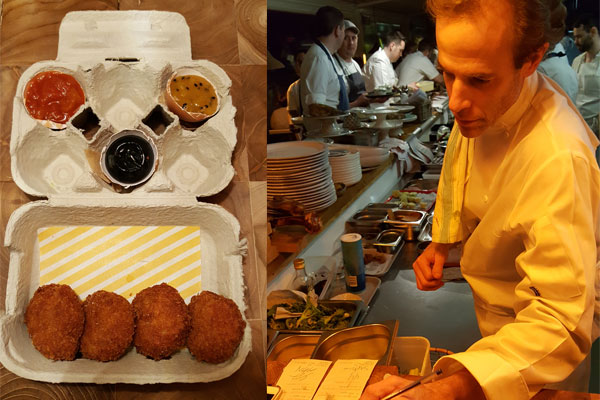 Veal nuggets and Dan Barber on the pass at Selfridges


The US cook isn’t the only one putting food waste into people’s mouths. In fact, he says most restaurants are doing it, just without specifically declaring it on their menu. By running the pop-up, a sequel to the first wastED, which ran for three weeks in New York in 2015, he aims to fuel the trend for cooking more with food waste – in the same way the department store showcases upcoming fashion trends.

“You walk around a place like Selfridges and you’re looking at what will become everyday fashions in one way or another, next year or the year after,” he says. “You’re seeing the future of things now. Some of the things on the menu may be provocative but over time they become more mainstream and they bleed into the culture. That’s what chefs are doing every day, everywhere – not just me.”

Fortunately, many in the UK are on board with Barber’s idea, from farmers to supermarkets to chefs, and he says the reception is the best he’s ever had. He has recruited more than 40 tops chefs from across Europe, including Alain Ducasse, Raymond Blanc and Gordon Ramsay, with each guest chef taking a night at the pop-up to cook the day’s special. 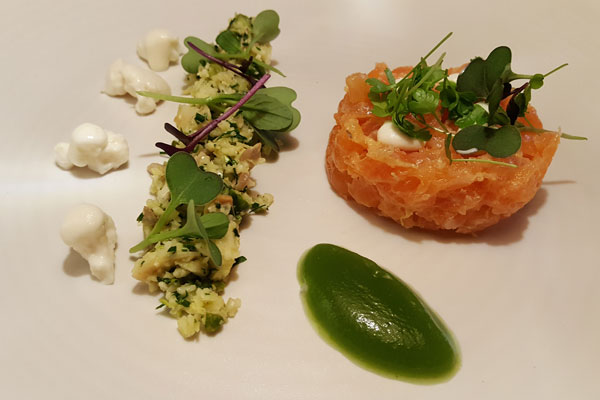 
While Barber is clear that he hasn’t come to London to preach or teach, he hopes that the project will have a legacy and, two years after the first pop-up in New York, he is starting to see results. Baldor, a large-scale vegetable processing company that was wasting industrial amounts of vegetables that didn’t make the cut, has just started a new company called SparCs, or ‘scraps’ spelled backwards.

“That’s now a pretty thriving little company based on the idea of simply saving what was otherwise thrown away,” says Barber. “That’s one thing to come out of our project that I’m excited about.”

With sustainability-conscious London-based chefs like The Clove Club’s Isaac McHale and The Dairy’s Robin Gill involved in wastED, we can be confident the waste-food movement won’t stop when the pop-up ends on April 2nd.