East London’s Tayēr + Elementary was named the Disaronno Highest New Entry after debuting at No.5 in The World’s 50 Best Bars 2020 list. 50 Best speaks to the bar’s co-owner Alex Kratena, who gives a frank account of what it is like to operate a world-leading cocktail venue in the throes of a pandemic

It’s perhaps unsurprising that Alex Kratena isn’t his usual jovial self. His bar is two weeks into its second enforced closure as the UK endures lockdown 2.0, he has just fixed a roadside bike puncture on a rainy London morning and he is working day and night to conjure fresh ideas to keep Tayēr + Elementary alive.

Pre-pandemic, his bar, which he co-owns with his business and life partner Monica Berg, was gathering serious pace. The 540 experts who make up The World’s 50 Best Bars Academy voted Tayēr + Elementary into No.5 position in the bar’s debut year on the list, giving it the title of Disaronno Highest New Entry 2020.

“When we were named Disaronno Highest New Entry it was very emotional,” says Kratena. “Any bit of positivity at the moment is nice, but it was also ironic. On the same day that it was announced, we were essentially shutting down the venue for the second lockdown. It felt good, but you still feel the burden of the whole situation.”

To enter the list at such a vertiginous position is no mean feat. When Tayēr + Elementary opened in May 2019, it was the bar world’s must-visit destination, courtesy of the collective clout delivered by both Kratena and Berg. By means of brief résumés, Kratena was a key member of the Artesian team that won four consecutive The World’s Best Bar titles; Berg has worked all over the world, notably at Oslo’s Himkok and in London at high-rated restaurant Pollen Street Social, where she delivered an award-winning bar programme.

That said, it wasn’t just Kratena and Berg that people were flocking to see. Tayēr + Elementary itself is also an innovative concept – or, more accurately, two interesting concepts – for the global bar scene. “The bar represents a culmination of all of our experience,” says Kratena. “We did a few things very selfishly, because we were trying to create a space where we would like to go and drink ourselves, but also an environment that we want to work in.” 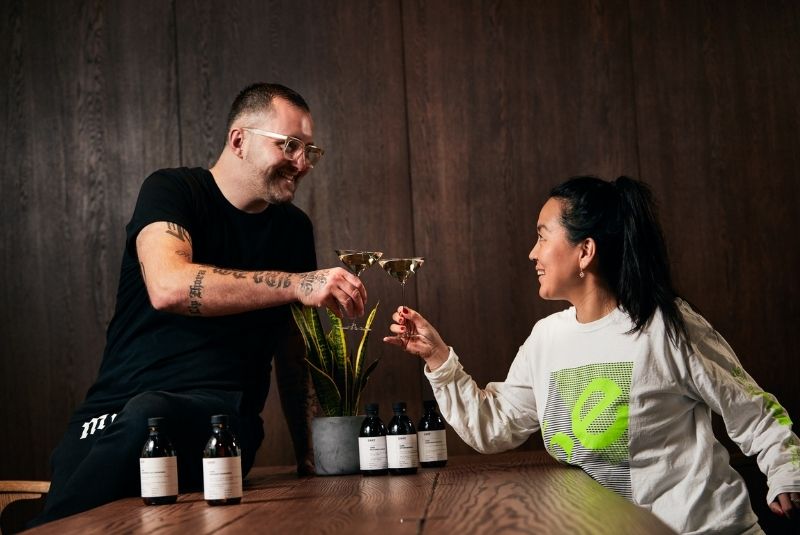 Tayēr + Elementary comprises two world-class bars under one roof. Elementary sits street side, with huge bifold windows that invite the world in during the good weather months. It showcases a daily-revolving menu of seasonal drinks, many of which are served on tap at a fair price for East London. “The initial vision for this space was that it would become the more ‘divey’ late-night venue,” says Kratena. “It has developed a lot of loyal regulars who come to try the new drinks and treat it as a quick-stop bar that they will visit a few times a week.”

Tayēr, named after the Spanish for workshop, has the hallmarks of a boundary-pushing cocktail bar. “When we first opened, everybody wanted to go to Tayēr,” explains Kratena. “People have been very interested in the drinks that we have created and the environment to drink them in. Both spaces have matured and evolved so much even in a relatively short space of time. I actually enjoy working shifts in Elementary more these days; I never thought I’d find myself saying that.” 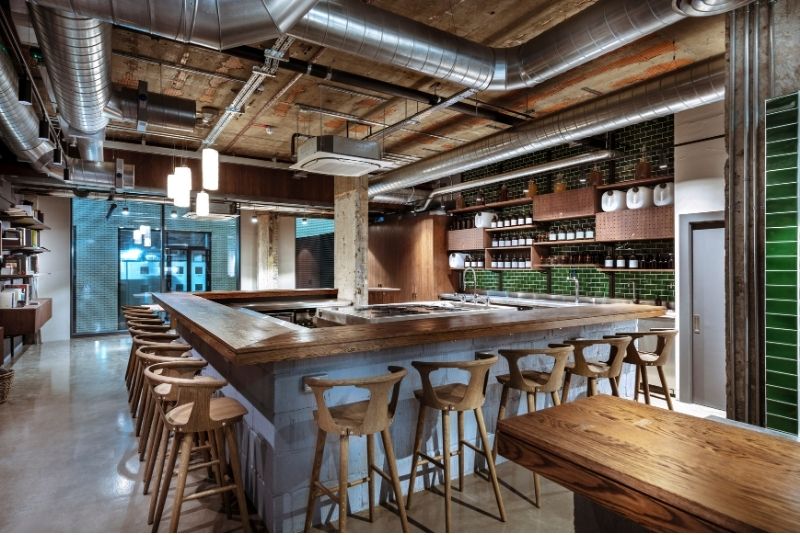 Tayēr, the 'workshop' on which the bar is built

On a base level, Tayēr is roughly five times the size of Elementary. It’s a concrete-washed space with botanical flourishes and Scandi-influenced furniture, all bathed in huge swathes of natural light. Table lays are well structured and sit at subtly different heights, which helps to provide a brilliant sense of flow to the room. The bartenders work in a large enclosed horseshoe, with plenty of space to mix without restriction. It may appear conventional to the regular bargoer, but to an experienced bartender, it’s full of the minutia that makes shaking wrists twitch. It also plays host to one of the best-designed speed racks in operation today: bar geeks the world over come to admire the tessellating shapes, designed by Berg, that allow quick and easy access to bottles.

Tayēr + Elementary is Kratena and Berg’s first independently owned space. The impact of restrictions imposed in response to the pandemic have brought the business side of the operation into sharp focus. “Mentally, I have struggled a lot,” says Kratena. “Particularly during the first lockdown, as we were left with a lot of uncertainty and the anxiety this brings. I admit I took it very badly. I need a certain kind of energy to do creative work and when I was not able to make plans, it was very hard for me.

“But when we started doing bottled cocktails, it made me happy and it gave me the motivation to keep going. Initially the amount we could do was quite restricted due to the licensing laws and there were a lot of obstacles to overcome. The second lockdown has been easier because we’ve been able to plan what to do… and this time we’re doing it a little differently.” 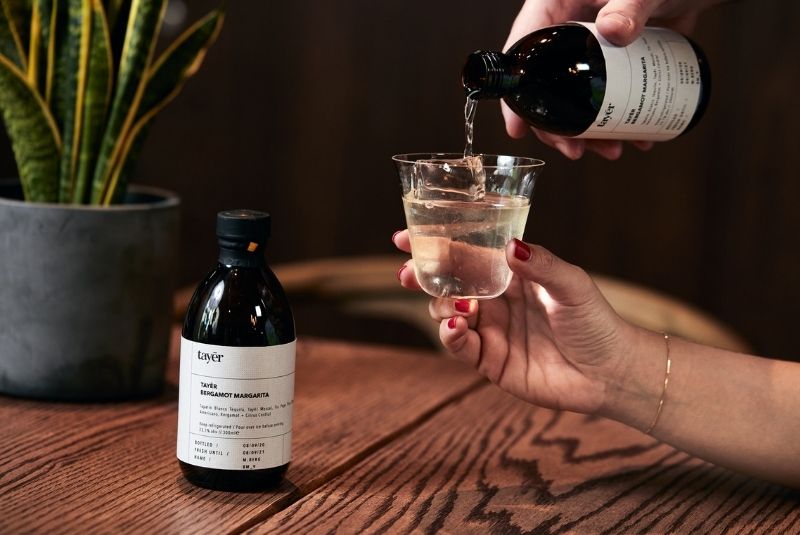 Visible behind Kratena and towering into his Zoom chat window sits this difference. Shelves are stacked high with bottles and dark glassy shapes that he hopes will see his bar through the latest lockdown. “We wanted to start the off licence [retail liquor store] earlier, but we had a lot of hoops to jump through to get the right licence,” he explains. “Now we have a nice selection of bottled cocktails that people can come in and buy and a great range of wines, too. We’ve been doing some great collaborations with wine producers and they have been really popular.

“It’s basically been a case of creating other legs to stand on. Back when we were open but had to close at 10pm, it worked quite nicely because people would be leaving and would grab a couple of bottles to carry out as they had no intention of going to sleep. Now they know we are selling these, they stop by to grab their favourite drink, or a bottle of wine that they know that we sell – the local community have been fantastic here and they’ve really kept us going. Now, we can’t imagine the bar’s business without our locals and bottle sales. It’s definitely a revenue stream that we will look to maintain once all this is over.”

Kratena is quick to point out that while being an independent bar operator has its obvious pitfalls, there are some positives to it, too. “When we make a decision, five minutes later people are working on it,” he explains. “Having the flat organisational structure we have created is massively helpful, because there’s a lot of things that I’m just not able to find time for. Other people in the team can just go away and execute, then show us the amazing results. So, yes, being a small independent does have certain advantages – one day I hope to look back on this over a glass of wine and say that we are proud of what we did and what we created, but I’m not quite there yet.” 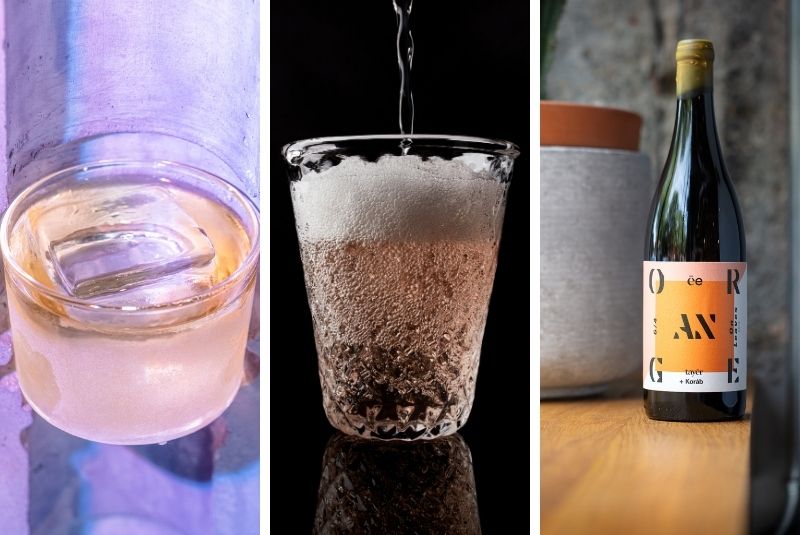 It is fair to say that many bar operators in the UK – and indeed the rest of the world – feel let down by the people elected to represent them. Much of the bar industry’s vitriol has been directed at government and Kratena feels both angry and disappointed at the perceived lack of respect shown to the hospitality sector. “What I would love to see change is our leaders standing up for us,” he says with a voice thick with emotion. “I have dedicated my whole life to make bartending a reputable industry and see it perceived as the highly skilled job that it is. So when I see governments around the world showing us zero respect, it makes me angry and it makes me want to push even harder for change.

“In recent months we have been forced to close our businesses by governmental decisions that are not based on scientific evidence or data. The bar industry has been completely forgotten by this government and we need to put things in place so that this can never happen again.”