Diversetown: why San Francisco is the natural destination for #50BestTalks Voices for Change

The latest edition of 50 Best's thought-leadership series, #50BestTalks, presented by Miele, takes place today in San Francisco, USA, with a focus on how gastronomic leaders can help champion a diverse future.

Ahead of the presentations by Gaggan Anand, Dominique Crenn, Enrique Olvera, Daniela Soto-Innes, Virgilio Martínez and Lara Gilmore, which will be livestreamed on 50 Best's Facebook and YouTube accounts, San Francisco writer Virginia Miller outlines the region's cultural and culinary make-up, explaining why the city is a perfect home for #50BestTalks: Voices for Change.

With its global impact often heralded and understated, it’s ever surprising to realize just how small San Francisco is. Merely seven by seven miles — surrounded by the oceans, mountains, vineyards and farmland of the Bay Area — SF’s influence equals or surpasses that of cities ten times its size.

Mediterranean-esque soils and climate ensure NorCal (and California) is home to the richest range of produce in the nation. Movements like Alice Waters’ game-changing Chez Panisse (opened in 1971) or the artisan bread and cheesemakers of the 1970s and 80s predated a national and global return to a farm-to-table, handmade ethos. The Bay is all about pushing boundaries in food and drink, as in technology and environmental practices.

This is aided in no small part by SF’s diversity. North to lush Sonoma and Napa counties, east to major cities like Oakland, south through Silicon Valley... the area is home to over 8 million people, not counting the 1-million-plus population of our neighbour less than 50 miles south, San Jose, with the largest Vietnamese population outside Vietnam. A few Bay Area cities — like Oakland, Vallejo, Suisun City, San Leandro, Fairfield, Richmond — are actually among the most ethnically diverse cities in the entire US.

With deep roots in Native American, Spanish and Mexican cultures, the area was under Mexican rule until the US seized the territory in 1846. As with all of California, Mexico is in its lifeblood and in the form of its panaderias, mercados and taquerias.

The Mission remains a dense Mexican and South American neighbourhood, with the Latin demographic around 25 per cent of the Bay Area population. Eat carnitas tacos at legendary La Taqueria or innovative Mexican fine dining at Californios and you’ll just begin to touch the vast range. Dig deep in regional Mexican cuisines, from Yucatecan (at longtimers like Poc-Chuc) to Oaxacan (think grasshopper tacos at tiny La Oaxaqueña). Around SF alone, eat your way through the cuisines of Central and South America, whether via Nicaraguan tamale or Salvadoran pupusas.

But let’s talk Asian cultures, accounting for roughly 25 per cent of the Bay Area, while in San Francisco proper that number rises to around 35 per cent. SF actually birthed the first Chinatown and the first Japantown (one of only three remaining) in all North America. Nearly half of Filipino Americans live in California, with the highest US concentration in the Bay Area, centered around Daly City. The Bay Area’s largest Asian demographic is Chinese and, in fact, Chinese food’s origins in North America can be traced back to SF’s charming Chinatown, the neighbourhood that introduced America to Chinese food. 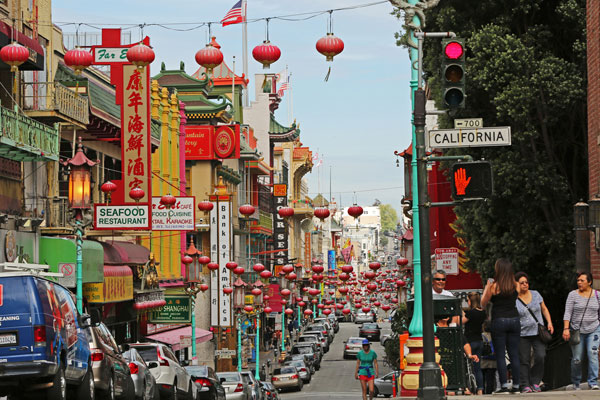 There are dense (close to 30 per cent) African American populations in towns like Richmond and Vallejo, a compact Afghan community in Fremont, widespread Indian demographics throughout Silicon Valley and in SF’s Tenderloin neighbourhood (unofficially dubbed the 'Tandoor-loin' with curry houses lining its diverse blocks), as well as substantial Jewish communities in SF and Marin counties.

When the conversation moves to gender diversity, the region has long championed women in food. Lauded chefs like Dominique Crenn have shown the world what a powerful, gracious female chef looks like, while pioneers like Traci des Jardins, Joyce Goldstein, Suzette Gresham-Tognetti, the sadly deceased Judy Rodgers of SF icon, Zuni Café, and, of course, Alice Waters, have moved opportunity and vision forward for decades.

The current generation includes Preeti Mistry, Tanya Holland, Gabriela Cámara, Melissa Perello, Belinda Leong and other talented chefs who create some of the best food in the country. Men are pushing the boundaries, too, like chef Daniel Patterson (of former 50 Best Restaurant Coi), who brought on mostly female Indian, Arab and Jamaican chefs to open concepts in his restaurant spaces, showcasing their heritages in bold ways.

Visionary thinking continues to shape the future from this small but mighty city and region, just as 40-50 years ago its food and drink pioneers were already crafting the artisanal spirits and foods we now see flourishing around the globe.

#50BestTalks Voices for Change: Championing a Diverse Future takes place at Dogpatch Studios in San Francisco from 14:30 local time today, Wednesday 12th September. Watch the livestream on The World's 50 Best Restaurants Facebook and follow on Instagram, Twitter and YouTube for all the highlights.