Why the future of protein is grasshoppers, ants and worms by chef Édgar Núñez of Sud 777

As new research into the nutritional value of insects is pushing the idea that bugs could provide a sustainable alternative to meat, a Mexican chef is reviving culinary traditions at his restaurant. Édgar Núñez spoke at #50BestTalks ‘Meat: the future’, presented by Miele, in Bogotá, retracing the history of insects in Mexico and showing some of the ways he incorporates bugs in his dishes.

“Why don’t we eat insects?” asks Édgar Núñez of Mexico City restaurant Sud 777 at #50BestTalks in Bogotá. The chef-owner of the acclaimed eatery – voted No.14 in the Latin America’s 50 Best Restaurants 2018 list – has been putting forward a version of contemporary Mexican cuisine that focuses on vegetables and natural produce, and his research has often led him to insects.

“In Mexico, we’ve been eating bugs for centuries. Until the Spanish conquered our country, we didn’t have a culture of breeding animals,” he says. Mexico wasn’t the only country that embraced the idea of eating insects, or entomophagy: in ancient Greek and Roman cultures, certain bugs – such as beetle larvae and locusts – were considered a delicacy.

It was thousands of years ago, when humans became sedentary and moved towards agriculture and animal breeding for sustenance, that insects stopped being seen as food – instead, because they could ruin harvests and pass on illnesses to animals, they started to be considered pests. Thus, human attitudes towards bug eating slowly changed over time. 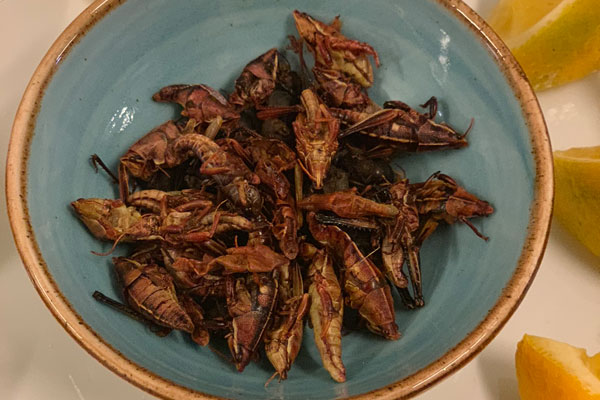 Grasshoppers served by Núñez for the audience of #50BestTalks

In the current climate, with movements all over the world calling for a reduction of meat consumption to fight climate change and to improve sustainability, bugs have once again come to the fore, with chefs like Núñez leading the way in incorporating insects into our diets.

In Mexico, there are the famous chicatana flying ants, from which the locals prepare a traditional delight known as mole de hormigas chicatanas. “Once a year, the ants leave the nests and go out to fly. People fish them with nets, clean them one by one, remove their stingers and toast them to make mole,” he says. A kilo of chicatana ants can cost up to $150.

The problem with using insects as ingredients on a large scale – such as that of a restaurant – is that in Mexico, there isn’t a production system in place for bugs, says Núñez. Most edible insects found on the market are collected in nature and their availability cannot be guaranteed. 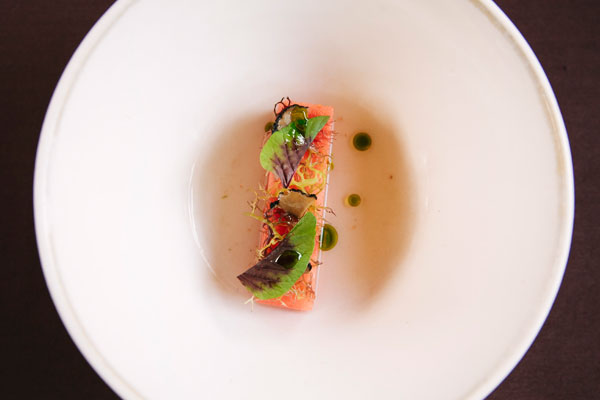 Núñez is also experimenting with other insects, such as grasshoppers – which, he says, “are a great source of protein with more nutrients, iron and selenium than meat”. They are eaten dried, crunchy and salty as part of dishes such as tacos, or to accompany the famous Mexican agave distillate known as mezcal. Worm salt and insect flour are some of the other products that the chef is researching, which can be used to make ant flour chocolate with a rich and rounded taste.

Aside from bugs, Núñez is also using other products to replace conventional proteins, such as algae. “Mexico is a country surrounded by three different seas, and all we want to eat is meat,” he says. “Algae can contain up to 25% protein. That’s very high and they can be very sustainable. We are experimenting with making an algae mole, and also substituting traditional French broths – made from fish bones – with a broth made from an algae reduction, which has a wonderful sea flavour.”

The chef is confident that these new alternatives to meat and fish are soon to take off all over the world. “There are many ways we can obtain alternative proteins, and especially in a hungry country like Mexico, this can be a cheap way of doing it. These little bugs are the only thing that could substitute meat.”