Header images: The Roca brothers of El Celler de Can Roca in 2015; Will Guidara and Daniel Humm of Eleven Madison Park in 2017; Massimo Bottura and Lara Gilmore of Osteria Francescana in 2016

It wouldn't be a 50 Best event without the finest food and chefs on the planet, so we've lined up Ferran Adrià, creator of the now-closed El Bulli, to play host at the event in Barcelona, presented by Miele. The cook behind the first ever No.1 and five-time winner of The World's 50 Best Restaurants will curate a gastronomic experience for a host of other superchefs from around the globe.

For 24 hours only, legendary chef Adrià will welcome fellow No.1 cooks René Redzepi of Noma, Joan Roca of El Celler de Can Roca, Massimo Bottura of Osteria Francescana and Daniel Humm of Eleven Madison Park to take part in a special programme in Barcelona. 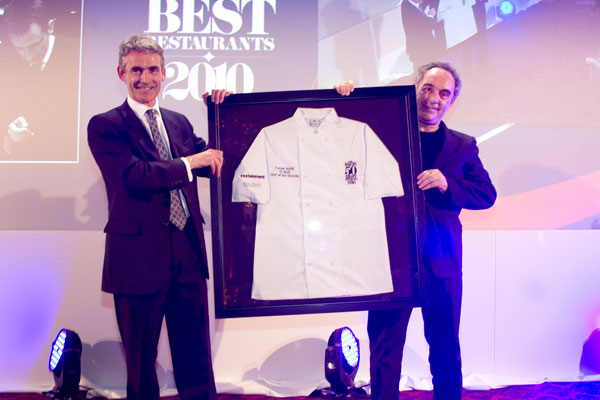 Starting on the morning of Tuesday 27th June, Adrià will welcome a select group of international chefs and media at his El Bulli Lab for a talk and tour of the research work being carried out as part of the El Bulli Foundation, which was set up after the famous restaurant closed its doors in 2011.

Next, the chefs of the past and present No.1 restaurants in The World’s 50 Best Restaurants list will take part in a special #50BestTalks live event to talk about the key developments and challenges facing the food and restaurant world in the future. #50BestTalks will be attended by an exclusive, invitation-only audience, with fans able to follow via livestream – details will be announced on our social media channels nearer the date.

Finally, Adrià will host a special lunch for the visiting chefs and VIPs with Carles Abellán and a group of fellow Barcelona chefs at Bravo24 restaurant at the W Barcelona hotel. The gastronomic event is invite-only, but food fans can follow the action on our social media channels.

Do you know all the former No.1s on the list? Refresh your memory: