Presented in partnership with I Feel Slovenia

The Central European country of Slovenia, peppered with some of the most awe-inspiring scenery on the planet, has long been a relative hinterland to gastronomes. However, through its new wave of restaurants that embrace heritage and interpret it through the lens of global, modern technique, it is becoming an essential waypoint on any gastronomic traveller’s map, writes Rudolf Abraham. Explore this ancient land, learn about its idiosyncratic food customs and begin planning a trip that will reveal a whole new world of flavour

Slovenian gastronomy is a meeting point of four culinary regions – a place where the flavours and traditions of the Alpine world, the Mediterranean, the Karst and the Pannonian plain all come together to create something which is really rather special and, most crucially, distinctly Slovenian.

A cornerstone of Slovenian cuisine is the use of local, seasonal and, in many cases, organic ingredients – the quality of which is often unsurpassed. Chef Ana Roš of Hiša Franko – the restaurant ranked No.21 in The World’s 50 Best Restaurants 2021 – sources her vegetables from small-scale farmers in the village of Srednje, in the mountains above the Soča Valley, while mushrooms, wild garlic and berries are seasonally gathered in the surrounding forests. ‘Zero kilometre’ is how she describes her approach to ingredients.

Chef Tomaž Kavčič gets cheeses from an artisan producer at Sinji vrh, on the edge of the Trnovo plateau which overlooks his Vipava Valley restaurant Gostilna pri Lojzetu at Dvorec Zemono on the western border of Slovenia. As David Vračko of Restavracija Mak in Maribor puts it: “In our environment – from the Adriatic Sea to the plains of Prekmurje – we can find absolutely everything that we need.” Slovenia was appropriately named European Region of Gastronomy in 2021. Let’s get to know a little more about its genesis.

A vineyard in the Vipava Valley

Say cheese – a Slovenian staple
The lush pastures of Slovenia’s Julian Alps in the country’s northwest support an age-old tradition of cheese making. Bovški sir (Bovec cheese) is an intensely flavoured, semi-hard sheep’s cheese from the area around Bovec in the Soča Valley, produced from the milk of the autochthonous breed of sheep (some producers also add up to 20% cow’s milk). Its production is recorded as early as the 14th century.

Tolminc, which was first recorded in the 1700s, is a semi-hard cheese from the high pastures around Tolmin made from raw cow’s milk, at least 80% of which comes from the local breed of cattle. As well as being highly regarded in its own right, Tolminc is also an essential ingredient in one of the most distinctive local dishes in the Soča Valley: frika – essentially, a potato and cheese tortilla made without any egg to bind it, incredibly rich and traditionally served with a wedge of polenta – more than a gastronomic nod to Mediterranean roots.

The River Soča near Tolmin

Skuta – fermented curd cheese, sometimes translated as cottage cheese but in reality utterly unlike it – is a traditional Slovenian staple, whether served on its own, as an accompaniment, or infusing altogether more complex dishes. Čompe an skuta (boiled potatoes with skuta) is a simple gem of a dish: this writer recalls fresh skuta mixed with a little local honey eaten in a farmhouse kitchen in the mountains above Tolmin as one of the most wonderful deserts ever tasted. Bohinjski mohant is a tangy, crumbly soft cheese made from raw cow’s milk in the Bohinj area. It’s fair to say that cheese, in myriad guises, forms the backbone of menus from humble local restaurants to 50 Best-aspiring fine diners.

Bovški sir, Tolminc and Bohinjski mohant all have protected designation of origin (PDO) status – as do several other food products including Nanoški sir, a cheese from the hills above the Vipava Valley. Several more have protected geographical indication (PGI) status, such as Kranjska klobasa, a distinctive pork sausage from the Gorenjska region in northern Slovenia.

Tolminc is an essential ingredient in one of the most distinctive local dishes in the Soča Valley: frika

Circling Slovenia’s produce
Slovenia’s Kras (Karst) region is a rocky plateau, riddled with caves and scoured by the cool, dry northeast wind known as the Burja. It is also the preeminent area in Slovenia for producing pršut – dry-cured ham, which is dried for at least 12 months – along with other charcuterie products such as Kraški zašinek (made from pork neck) and pancetta.

Jota, a simple, warming stew made from potato, beans, cured pork and pickled turnip, is one of the most widespread traditional dishes in Slovenia, though it is said to originate in Kras. Elsewhere it is sometimes made with sauerkraut, but the pickled turnip provides a uniquely Slovenian kick.

The country’s southwestern Adriatic coast is a source not only of seafood, but also of mineral-rich salt, including the highly prized fleur de sel. The Piran Salt Pans have been worked since the beginning of the 9th century and salt is still harvested here using traditional means and wooden tools. Slovenian Istria is also home to some fabulous olive oils, pressed from the local olive variety, Istrska belica.

The Piran Salt Pans, which is harvested for mineral-rich salt

The rolling hills and farmland of the central and eastern lowlands provide an abundance of grains, which remain an integral part of many soups, stews and other dishes. One of the best known is ričet, a vegetable stew with barley and cured pork, while buckwheat forms the base of Pohorski lonec, a stew from the Pohorje region made with a mixture of pork, beef and lamb.

The northeast of Slovenia is also where some of the country’s finest pumpkin seed oil is produced, in Štajerska and in particular Prekmurje. Around 6kg of pumpkin seeds go into making one litre of oil, with the seeds lightly roasted before pressing to create an incredible depth of flavour that is prized in restaurants across the country.

Slovenia, perhaps surprisingly, produces some excellent wines, both from international varieties such as Chardonnay and Merlot, as well as a slew of indigenous grape varietals. These indigenous varieties include Rebula (associated most closely with the Goriška brda region) and Istrian Malvazija (the most widespread variety in Slovenian Istria), while in the Vipava Valley you’ll find Zelén and Pinela. On the opposite side of the country, Furmint is the grape to look out for in the Štajerska region, in particular when allowed to be affected by noble rot, and above all from the small hilltop village of Jeruzalem. Refosco and Žametovka produce reds, in the Karst region and Štajerska respectively.

A wine cellar and red wine from the Goriška brda region

And then there is honey. The 18th-century Slovenian apiarist Anton Janša is widely regarded as the father of modern beekeeping – so it’s perhaps unsurprising that Slovenia maintains this widespread tradition with over 10,000 beekeepers, scattered from the country’s mountains and forests to the rooftops of its capital Ljubljana. One of the most highly prized honeys is chestnut – dark, thick and incredibly rich, its distinctive flavour stemming in part from the high proportion of pollen grains it contains. Two types of honey have PDO status, Kočevski gozdni med (Kočevje forest honey) and Kraški med (Karst honey).

Conventionally, it is said that it’s in the Slovenian capital that all these traditional dishes and wonderful ingredients are reinterpreted in new and creative ways – but in truth, breathtakingly innovative, cutting-edge cuisine is spread widely across Slovenia, not only in Ljubljana. One look at the gastronomic map makes this clear. Indeed, the highest rated and most talked about restaurant in Slovenia, 50 Best regular Hiša Franko, is in Staro Selo, a small village just outside Kobarid in the rugged surroundings of the Julian Alps.

Štanjel, a village atop a mountain the Karst region of Slovenia

Hiša Franko, Kobarid
Dinner at Hiša Franko is a thing of beauty. At white-clothed tables, each bathed in their own pool of soft light from a low-hanging lamp, a succession of exquisitely presented dishes arrives, with thoughtful wine pairings. The menu opens with a petal-like creation made from celeriac, truffle, creamy egg, milk skin and buttermilk powder, served alongside a cube of beef tongue pastrami, seaweed crystal, jalapeño and wild watercress. It moves through the likes of grilled quince, pumpkin, bergamot and kale salad, and nettle gnocchi with local cheese and beeswax fondue – and comes to a full stop a dozen courses later, with bee pollen ice cream, persimmon, roasted koji bean and reduced whey dip. Or perhaps not a full stop so much as a question mark, because, as Chef Roš herself comments, it's a menu full of questions – its ingredients are rooted in local producers, while its imaginative scope is global. Ana Roš was named the The World’s Best Female Chef in 2017, as selected by The World’s 50 Best Restaurants voting Academy.

Gostilna pri Lojzetu, Vipava
Tomaž Kavčič is the chef at the highly rated Gostilna pri Lojzetu, housed in Dvorec Zemono, a beautiful Renaissance manor in the Vipava Valley. Kavčič combines an emphasis on purity with a striking deconstructionist approach – the latter so imaginative that it won him the European JRE Award for Innovation in 2017. The focus is on flavours local to the Vipava Valley – wild sea bass cooked on Piran salt and served with red chard, grilled porcini paired with seared local corn, deconstructed beef soup, chestnut sorbet with persimmon jus – with some ingredients reappearing and echoing through different courses. There’s also a playful degree of showmanship – to set the scene for the juniper sorbet with gin jelly, the scent of juniper is literally poured across the table in a stream of dry ice – and the wine pairings are fantastic. It was here at Dvorec Zemono that the Slow Food movement in Slovenia began, back in 1994.

JB Restavracija, Ljubljana
Located in the heart of Ljubljana, JB Restavracija was the first Slovenian restaurant to make the extended 51-100 list of The World’s 50 Best Restaurants back in 2010, and its chef Janez Bratovž is one of the great pillars of Slovenian cuisine. He still chooses his ingredients himself on a daily morning walk around the stalls of the city’s open market. “It’s the ingredients that count,” he says. “The secret is to find them, and then create good dishes.” One of Bratovž’s signatures – ravioli parcels with wild flowers layered into the pastry dough – is a masterclass in form, function and flavour.

Janez Bratovž plating a dish at his restaurant, JB Restavracija

This is Slovenia
Given all this – from the geographical position to the abundance of excellent, locally sourced ingredients – it’s not surprising that Slovenia has emerged as such a culinary hotspot. Those in the know might add that it always was, and it’s only more recently that the rest of the world has woken up to the fact. And perhaps it’s because of the emphasis on local and the ‘zero kilometre’ philosophy towards ingredients that even at its most imaginative, it remains true to its roots. “What’s important,” says Tomaž Kavčič, carefully serving his famous and fabulously opulent deconstructed beef soup, “is that when tasting these dishes, you should be able to close your eyes, and say – this is Slovenia.” 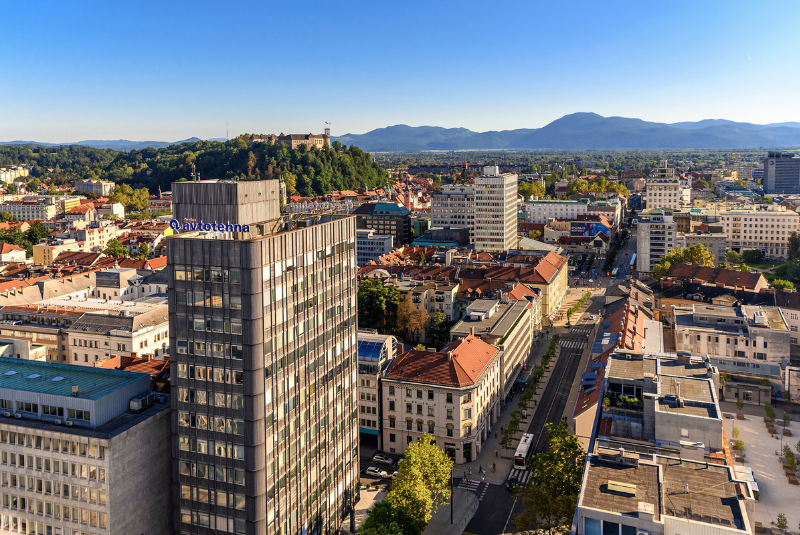 An aerial view of the Slovenian capital, Ljubljana