Ferran Adrià: "I never wanted to become a cook"

In the first of our Best and Beyond series, presented by Miele, we spoke to legendary chef Ferran Adrià, whose restaurant El Bulli was the first ever No.1 in The World’s 50 Best Restaurants.

Eighteen years old and desperate for cash to fund a summer of partying in Ibiza, the future world’s greatest chef did what any teenager might do – he took a job washing pots. If it weren’t for that summer season as a kitchen porter, things might have turned out very differently for Ferran Adrià, whose restaurant El Bulli went on to be named No.1 in the world a record five times.

The beginnings of El Bulli itself were similarly happenstance. The property at Cala Montjoi in Roses, north-east Spain, started life in 1961 as a mini golf installation set up by a German couple, Doctor Hans Schilling and his wife Marketta. It went on to serve as a beach bar and a grillroom long before it became one of the most famous dining destinations in the world. Even the name had no profound hidden meaning – ‘bulli’ was simply the colloquial name in Catalan for the French bulldog breed owned by the Schillings.

“Life is in the details,” says Adrià. “To pay for my holiday I had to look for a job and the first one I found was washing plates. If that vacancy hadn’t come up that day, I wouldn’t be here. I wasn’t vocation-driven. I never wanted to become a cook.”

But cook he did, of course – Adrià made his name and that of El Bulli through a forward-thinking, always questioning approach that would inspire countless chefs around the world. In Adrià’s own words, El Bulli changed the paradigm of gastronomy.

Several decades later, El Bulli would close and Adrià would hang up his chef’s hat, with the restaurant’s legacy firmly cemented in global gastronomic history. Techniques that are now taken for granted at fine dining restaurants around the world, such as foams and spherification, were created behind the closed doors of the El Bulli taller or workshop. Spain itself rose to global consciousness as a gastronomic force to rival France. Adrià and his brother Albert became legends of the cooking world. When El Bulli conducted its final service in July 2011, it was hailed as the end of an era.

If both Adrià and El Bulli came from such humble origins, how did they come to create what is probably the biggest gastronomic impact of the 21st century to date?

The answer, perhaps, is in the chef’s endless pursuit of knowledge, his constant desire to push boundaries. Over the life of El Bulli, the restaurant was only open six months of the year. Adrià and his team took the rest of the time to work on new techniques and to create an entire menu from scratch for each summer season. While others in the restaurant world might hail him as one of the most knowledgeable people on the planet, the chef himself claims otherwise. “I have discovered that I know nothing; that what I thought I knew wasn’t right. I am unlearning everything to start learning again,” he says.

It was this quest for knowledge that led to the creation of some of the culinary world’s most iconic inventions: foams made with a cream whipper; the famous liquid olive, which still makes regular appearances on Albert Adrià’s menus; frozen powders and warm gelatines. The chef is often associated with molecular gastronomy, but he prefers the term deconstructivism, which he describes as “taking a dish that is well known and transforming all its ingredients, or part of them; then modifying the dish’s texture, form and/or temperature. Deconstructed, such a dish will preserve its essence… but its appearance will be radically different from the original’s.”

Ferran Adrià took well-known or classic dishes such as the Spanish omelette or chicken curry and picked them apart. Among his accomplishments were savoury ice creams, such as parmesan or tomato water ice, soups served at three different temperatures and artichoke lollipops. It was about expecting the unexpected, challenging the diner’s expectations. 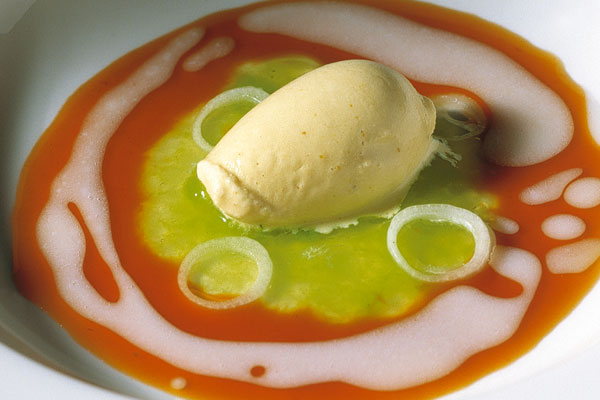 
“To me, the most important focus of what he did is freedom,” says Massimo Bottura, chef owner of Osteria Francescana, which was No.1 in The World’s 50 Best Restaurants 2016. “He really gave us the freedom to express ourselves in any way, and that’s an amazing thing.”

But Adrià wasn’t always this creative – his stint as dishwasher led to cooking experience and he eventually made it to Ibiza for that holiday. At 19, he worked as a cook during military service and in 1983 he arrived at El Bulli, which already had two Michelin stars, for a month of work experience. He was invited to return the following season as chef de partie, but it was only in the late 1980s that he began to truly experiment with avant garde cuisine, making innovative dishes such as lobster gazpacho in 1989 and creating the first foam in 1994.

“I was already very well-known at the time,” Adrià recalls. “I had been on the cover of The New York Times. So for us, it was more a question of Spain coming up in the world than me or El Bulli alone. I was very happy – I love winning awards – but for me it was more important that Spain and our generation could go through that. I wanted Andoni [Luis Aduriz], Joan [Roca] and [Juan Mari] Arzak to be up there too. We all had some incredible times.” 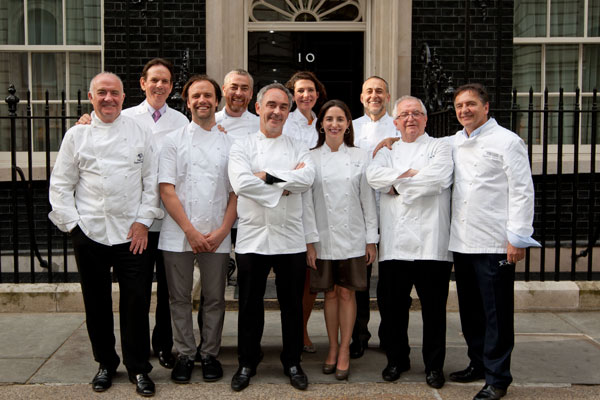 The future of food

Adrià has had plenty of time to process his fame. While his restaurant won almost all of the food world’s notable accolades, the chef graced the covers of dozens of magazines around the world and appeared on TV shows and in films. ‘Ferran’ became a household name. But while the cook admits he has the ego befitting of any world-leading talent, he balances it with modesty well. To him, the real best chef in the world is his pastry chef brother Albert, who now runs the El Barri group of restaurants in Barcelona including Tickets, Pakta and most recently Enigma.

Adrià is quick to acknowledge that El Bulli wasn’t a solo project. His partners, Albert and the late Juli Soler, were fundamental to its success, as were the 2,500 staff members who made up the El Bulli ‘family’ over the 25-plus years of Adrià’s tenure. He developed long-lasting relationships with many of the chefs he mentored over the years, including Oriol Castro, Mateu Casañas and Eduard Xatruch, the trio of former El Bulli chefs who went on to found their own successful restaurants, Compartir and Disfrutar – the latter winning the 2017 Miele One To Watch Award in The World’s 50 Best Restaurants. 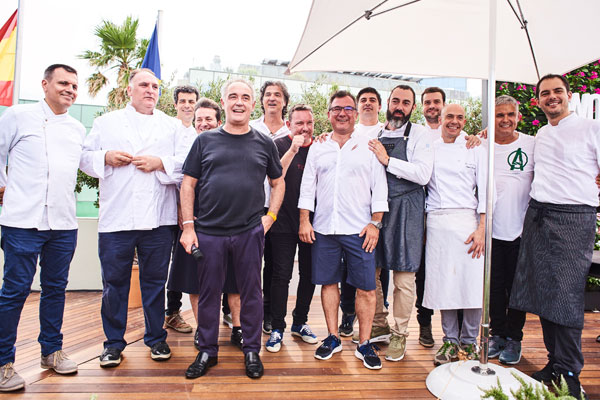 
While he actively promotes his many disciples – some of whom he says are ‘like children’ to him – Adrià says he doesn’t envy today’s cooks and restaurateurs. When El Bulli closed in 2011, social media was in its infancy. Now, he says, chefs have to contend with seeing their dishes splashed all over Instagram and other channels, which he says rather ruins the effect of any intended surprise components of a meal. They also juggle the demands of a more immediate and critical audience, through blogs, instant online review sites and Twitter.

Instead of having his cooking poked and prodded at by professionals and amateurs alike, Adrià now watches and analyses the restaurant world from a slightly more distant perspective as he builds an archive of information about the gastronomic universe for future participants.

Ask him about the closure of El Bulli and he will always retort that it never closed – it simply ended in its restaurant form, reopening in 2014 as a cultural foundation and museum centred on the restaurant and the history of gastronomy.

“People find it difficult to understand, especially now that some time has gone by, that El Bulli wasn’t just a restaurant,” says Adrià. “It was a way of life, a philosophy that spanned many projects and people.”

El Bulli Foundation has invested 3 million euros over the past four years to create a body of knowledge about the world it previously inhabited, which Adrià says is undocumented. In another five years, Adrià and his team will have produced 25 books of 500 pages each, plus a digital archive, all with the aim of explaining cooking techniques and products as no publication has ever done before. He is also promoting gastronomy as an academic subject.

“I’ve been hearing about products, products, products for 15 years,” he explains. “And yet there is no book that explains the difference between a fruit and a vegetable at a scientific level. That’s what you need to understand plants and animals scientifically.” 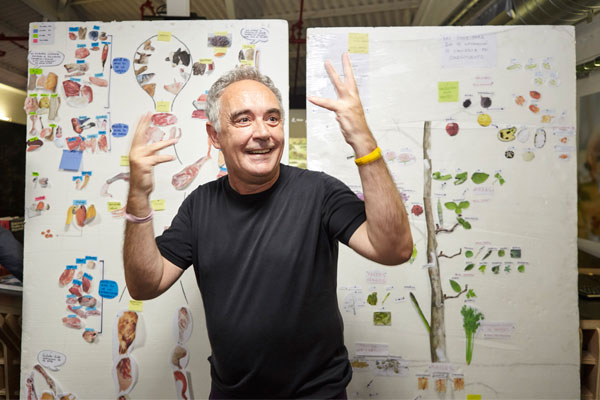 Adrià speaking at his El Bulli Lab in Barcelona, June 2017

Adrià broke all the boundaries at El Bulli, creating 40-course menus of quick-fire dishes that would render diners speechless. In 1998, his was the first restaurant to reveal all its recipes – something he says was “unthinkable” then.

He is not just forward thinking in his approach to cooking but also in his vision of the industry’s future. He is firm in the belief that chefs of his calibre must make way for a new talent that is already better than his generation ever was. He also acknowledges there needs to be a balance of gender in the kitchen and says that within 15 years there will be equality.

So for all the boundary pushing and forward thinking, why did he stop cooking? For Adrià, the challenge of becoming The World’s Best Restaurant again wasn’t enough. In fact, the challenge became the search for new challenges; the pursuit of something that would generate enough excitement for his team to jump out of bed in the morning as cooking at El Bulli once did. And that challenge now, he says, is to be able to create a way to teach young chefs about what he and his team did at El Bulli.

“I want the new generation to be better than we were – they already are,” he says. “But I want them to understand what they’re doing, not just to do it for the sake of it.”

Adrià opens his speech at a #50BestTalks event to celebrate the 15th anniversary of The World’s 50 Best Restaurants by saying he never expected to be at such an event – because he no longer owns a restaurant. He is one of the world’s best-known chefs, but he no longer cooks. So what is his legacy?

Daniel Humm, chef-owner of the current No.1 in The World’s 50 Best Restaurants, Eleven Madison Park, puts it best: “What Ferran has done is unbelievable. He changed how we all think about food. Not just for us chefs at the highest level, but he changed the way people think about food on any level. That is beyond, beyond, beyond inspiring.”

Now watch Ferran Adrià's speech on teaching the next generation at #50BestTalks in Barcelona:

Over the next few weeks, we will be publishing articles on all seven of the chef-owners of the past and present No.1s in The World's 50 Best Restaurants as part of our Best and Beyond series, presented by Miele. Stay tuned to our Facebook, Instagram and Twitter channels for alerts and subscribe to our YouTube channel for all the videos.