Five Korean ingredients from the stars of KoreaNYC

Five of Korea’s top chefs are cooking in New York for our special KoreaNYC Dinners series next month, in association with gourmet magazine La Main. They won’t have access to all of their most prized ingredients so it’s lucky they’re teaming up with New York’s finest cooks, including Dan Barber of Blue Hill at Stone Barns.

As the chefs prepare their one-off menus for KoreaNYC, they talk us through five of their favourite original ingredients.

Find out how to buy tickets for the dinners here.

What is it and where is it found? “Neung-i is impossible to grow. To get this, we have to go deep into the forest in autumn. The aroma is so authentic – it smells like wet forest, old trees and it also has an earthy, flowery aroma. It's also known as ‘Aromatic Mushroom’.”

How to cook it and what it tastes like: Neung-i is very valuable. The drying process enhances the aroma and chewy texture and the colour turns black when it’s cooked.

Tony's tip: “I love this because it makes dishes very authentic and attractive even if we don't use any meat. Also, dried neung-i is great for making tea. Just imagine the aroma!” 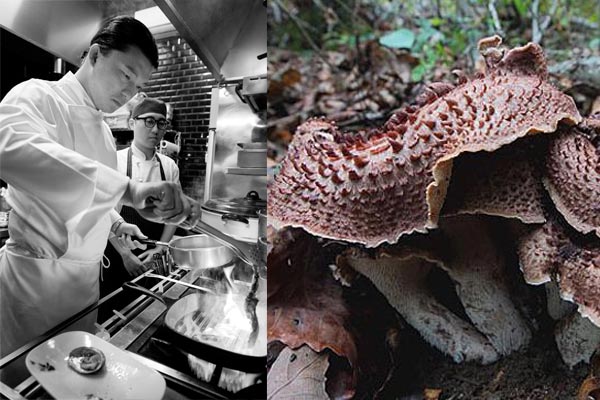 Tony Yoo at work in the kitchen and neung-i mushrooms

What is it? Deodeok is known as a kind of ginseng, but it’s actually quite different from that. Koreans use it for food and medicine because it's full of nutrients.

Flavour and uses: "Koreans only use the root part: it has a mild-bitter flavour, but it is hard to describe – so just taste it! We use deodeok in many dishes – it can be peeled and used raw in salad with pepper paste or pine-nut puree, or grilled with gochu-jang seasoning. It’s also used for pickles, or deep-fried and drizzled with honey for dessert."

Jinmo-style: “I personally love to eat raw deodeok. It has a very mild bitter nuance and the aroma is magnificent.” 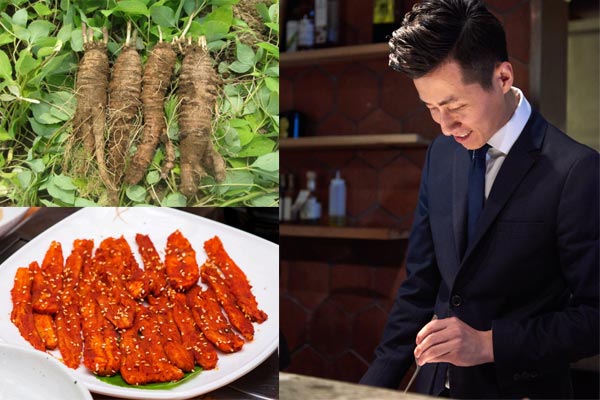 What is it? We all know seaweed, but Koreans call it ‘kim’ and they eat it daily. It’s taken from the rocks in the sea and then dried.

Jungsik-style: “Normally Koreans eat kim by wrapping rice with it, but I like to make it more fine and tasty.” (see picture below) 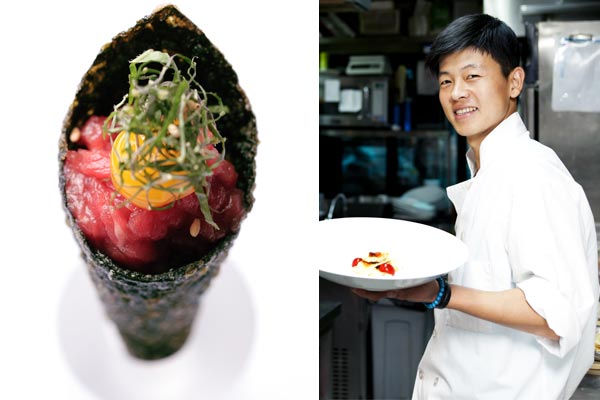 Jungsik and his Korean beef tartare in 'kim'

Why use doenjang? Koreans enjoy vegetables in various ways: dried, steamed, boiled and fried. But for vegetables with complex flavours, something more than salt is needed. That’s where doenjang comes in: the soy-fermented paste with lashings of umami is one of the main sources of Korean taste.

What to eat it with: "Doenjang enhances the natural flavour of ingredients and weakens any bad taste. It gives a dish a good balance and matches with beef, pork, seafood and vegetables – pretty much everything!"

Mingles-style: “I use dried doenjang powder to substitute salt, and I also mix it with rice vinegar.” 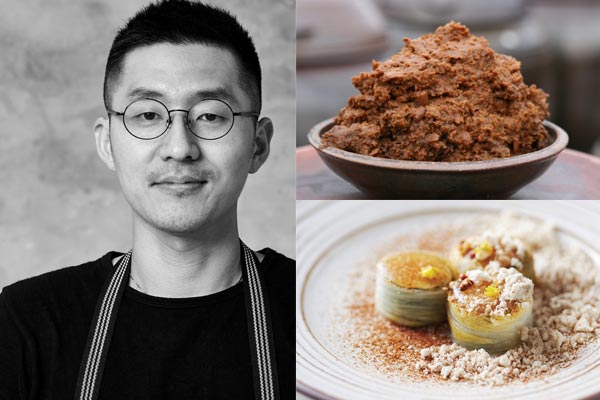 Gan-what? Ganjang. Like doenjang, it’s derived from soy fermentation. While doenjang uses the body of the soy plant, ganjang removes it, so it’s also known as soy sauce.

So it’s just soy sauce? Not quite. Although soy sauce is known internationally, Korean ganjang is a little more heavy – darker and stronger. Soy sauce is essential for most Koreans and it’s hard to find a dish without ganjang.

Hyunseok-style: “Since I'm into molecular cuisine, I love to make ganjang ice cream with nitro. It matches with so many Western dishes while still keeping to authentic Korean flavours.” 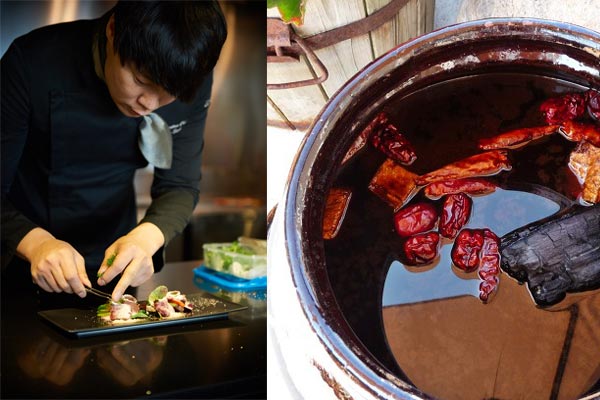 
We're offering the opportunity to join some of these Korean chefs and a host of other 50 Best stars at our #50BestTalks: The Tastemaker event on Sunday 12th June.

Find out how to enter.