As The World’s 50 Best Restaurants prepares to host its 2019 awards ceremony in Singapore, we explore the local cuisine in our new series. Local home cook and 50 Best TasteHunter Lennard Yeong guides us through the five key types of Singaporean cuisine and their most iconic dishes, as well as the best hidden gems and hawker stalls.

Is there such a thing as Singaporean cuisine? Undoubtedly, yes. In a country with so many varying ethnic cultures and backgrounds, food is the one unifying point for many of us, and is very closely tied with our national identity.

It’s impossible to discuss Singaporean food, however, without talking about demographics and history. At the centre of several important trade routes, Singapore became a commercial hub in 1819, attracting traders from the surrounding region, each bringing their own food traditions. Over time, dishes were modified to suit local taste buds and to adapt to the ingredients available, forming dishes that are cross-cultural and truly unique. The best way to delve into the diverse world of Singaporean food is still through its different ethnic-group origins.

Chinese food in Singapore is difficult to define as a whole because historically, immigrants from different regions of China brought their own cuisines to Singapore and developed them here. The main Chinese dialect groups in Singapore are Cantonese, Teochew, Hokkien, Hakka and Hainanese. Each bears its own intrinsic differences, but much of the Chinese cuisine in Singapore today was developed by the chefs who migrated over in the 1960s. 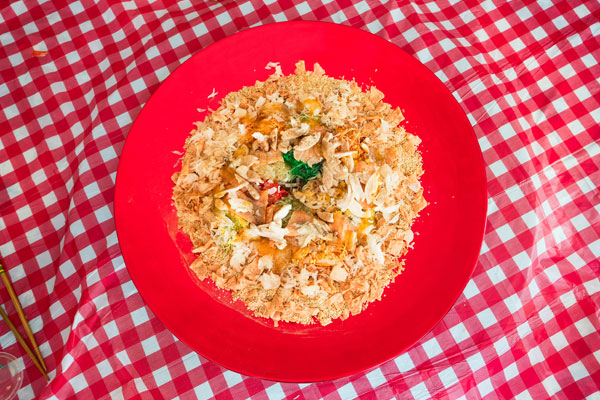 Yu Sheng
One such dish is the infamous Yu Sheng, credited to the 'four Heavenly Kings', a name given to four prominent Cantonese chefs who created it in 1964. Essentially a salad, Yu Sheng is typically only eaten during Chinese New Year. Each ingredient has a specific meaning, symbolising either wealth, health, luck, success or longevity.

Where to eat it: Most Chinese restaurants will serve Yu Sheng in the weeks leading up to and during Chinese New Year, for example Keng Eng Kee 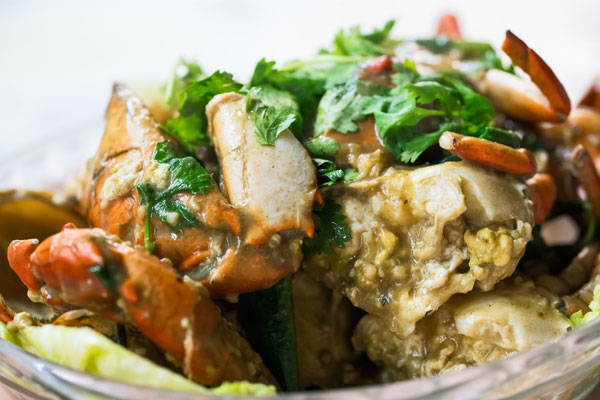 Zhi char
Zhi char stalls serve Chinese food that is cooked very quickly in a blazing hot wok to pick up the almost mythical flavour of wok hei, which translates roughly to 'aroma of the wok' – a complex, charred, slightly smoky flavour. Zhi char stalls are where you will find crabs cooked in a variety of ways – chilli crab is of course the most well-known, but my personal favorite is white pepper crab.

Where to eat it: JB Ah Meng

Malays were the indigenous people of Singapore, and the second-largest ethnic group after the Chinese. Most Malays in Singapore have roots in Malaysia and Java, Indonesia. Malay food is known for its use of spice – the foundation for many dishes is a rempah, a wet spice paste that often contains aromatics such as lemongrass and galangal. Another important condiment is known as sambal, a fiery chilli paste that makes even the blandest dishes taste amazing. Coconut milk is often used to enrich dishes, a term fondly referred to as lemak, meaning creamy or fatty. 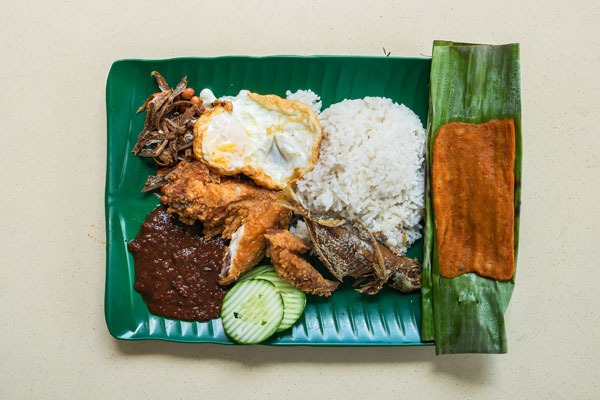 Nasi lemak
The most iconic Malay food is nasi lemak, a rice dish that is cooked in coconut milk to make it incredibly aromatic with a rich mouthfeel. The fragrant rice is usually served with an assortment of toppings like fried chicken, toasted peanuts, or a boiled egg.

Where to eat it: Power Nasi Lemak 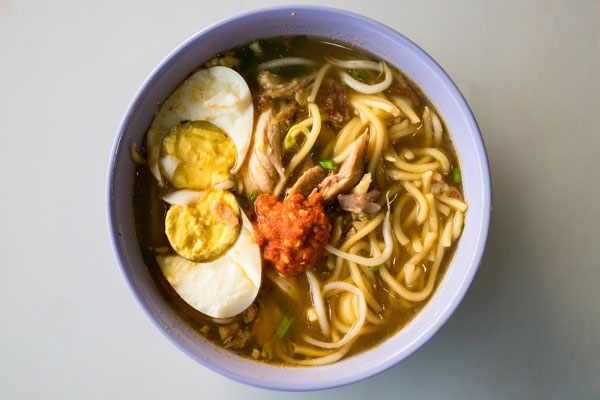 Mee Soto
Mee Soto is another much-loved Malay dish. At face value, it is not unlike a Western-style chicken noodle soup, but it is flavoured with the aforementioned rempah, which contains turmeric that stains the broth yellow and flavours it with a wonderful aroma and makes it taste unmistakably South-East Asian.

Where to eat it: Inspirasi Stall

While Indian immigrants first came to Singapore in the 19th Century as Tamil (South Indian/North Sri Lankan) traders, mass immigration only began in 1819 through the British connection, as both Singapore and India were under colonial rule. As such, Indian food in Singapore is predominantly South Indian, employing the use of spice, but unlike the 'wet spice' used in Malay food, Indian spice is usually dry, such as coriander seeds, mustard seeds and cumin. 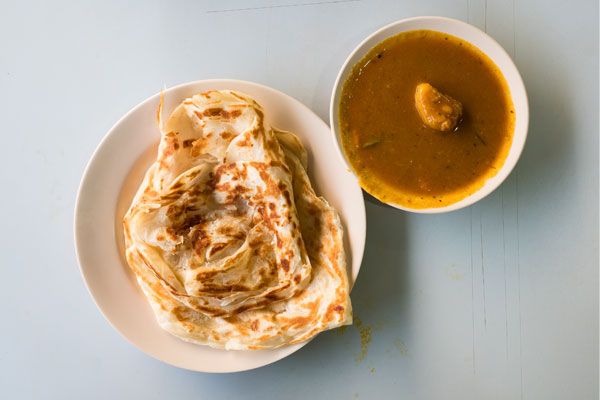 Roti prata
A popular Indian dish that is loved equally for breakfast or supper is roti prata, Singapore's answer to the croissant. A South-Indian flatbread, it is made by folding in layers of ghee (Indian clarified butter) into dough, then stretching it out and pan-frying on a griddle.

Where to eat it: Mr and Mrs Mohgan's Super Crispy Roti Prata 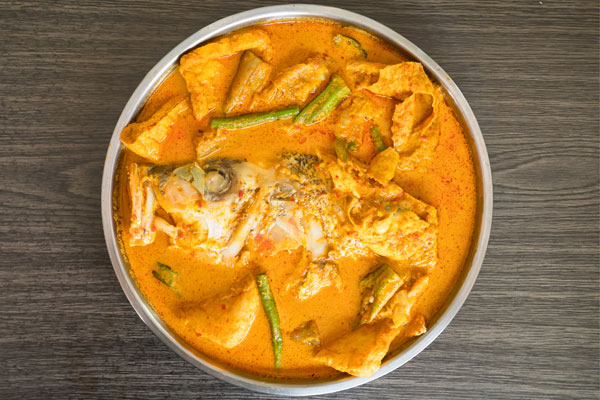 Fish head curry
The Indian chefs who came to Singapore also modified dishes to suit local taste buds, with one such dish unique to the region being fish head curry. This combines the spices of a South Indian curry and the head of a red snapper, an ingredient long considered a delicacy to the Chinese.

Where to eat it: Samy's curry restaurant

The literal translation of the words 'child' and 'descendants', Peranakan refers to the descendants of the Chinese immigrants who settled in the Malay archipelago, many of whom ended up inter-marrying with the local Malays and Indonesians. The food is a reflection of the culmination of these two cultures, typically combining Chinese ingredients with cooking techniques and spices from Malay cuisine. 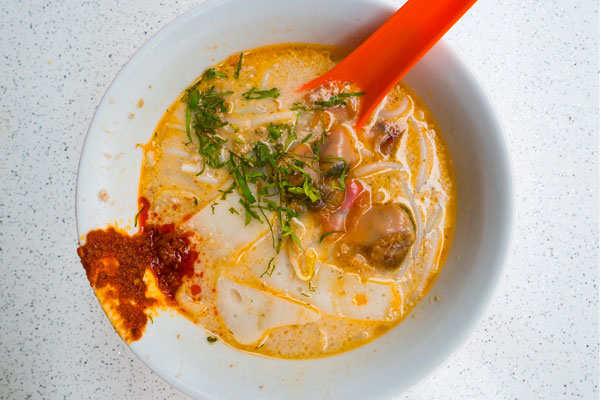 Laksa
Nyonya laksa, the variation of laksa most commonly found in Singapore and also one of its most iconic dishes , has Peranakan origins. It uses a rempah that has been fried and then infused into a prawn stock enriched with coconut milk.

Where to eat it: Sungei Road Laksa 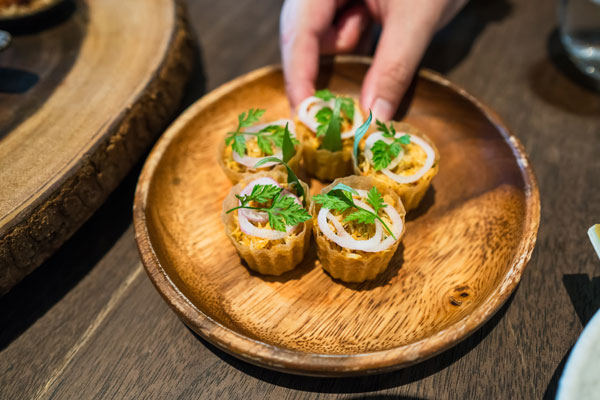 Kueh pie tee
Another Peranakan dish to try is Kueh Pie Tee, a fried paper-thin tart shell that when inverted, looks like a British top hat, a nod to the influence during British colonial times. The tart shell is filled with stewed turnips and carrots, and is served together with chilli sauce as a snack during Peranakan meals

Where to eat it: Candlenut

Any discussion of Singaporean food would be remiss without mention of the food served from hawker stalls. Hawker centres, the government's sanitised answer to the unlicensed street stall carts that were rampant in the 1950s, are melting pots of people from all walks of life, exemplifying the essence of Singapore. As a Singaporean of Chinese origin, I enjoy Malay, Indian and Peranakan dishes just as much as I enjoy Chinese food, and I’m sure that the inverse is true for my fellow Singaporeans of other races.

These days, hawker centres feed the masses, with dishes priced as low as $3. Singaporeans and tourists alike are able to sample recipes that hawkers have spent their entire lives perfecting, some of which have been passed down for generations. 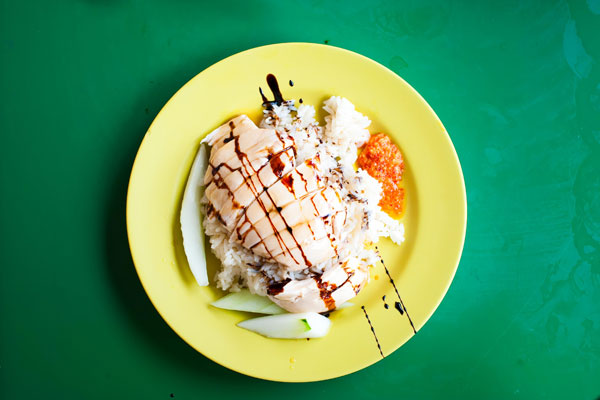 Chicken rice
Hainanese chicken rice is another of Singapore's iconic dishes. Ironically, it is not a dish from Hainan, but was in fact created by the Hainanese chefs who migrated to Singapore. A two-component dish, it comes to life with condiments: sweet and savoury dark soy sauce, chilli sauce and a ginger-garlic sauce.

Where to eat it: Tian Tian chicken rice 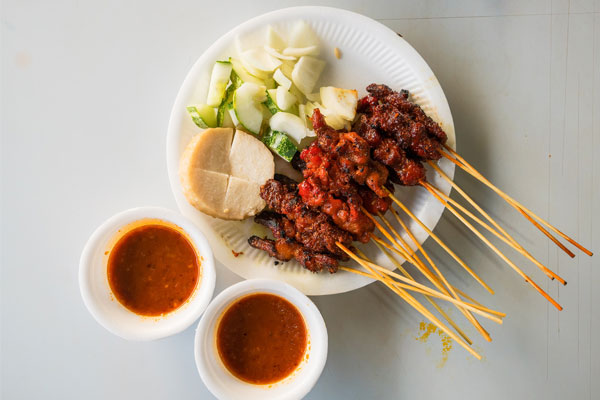 Satay
Satay, although originally of Javanese heritage, is now a staple at most hawker centres. Typically using chicken, mutton or beef, the satay is marinated skewered meat, grilled over charcoal, served with a peanut sauce – addictive and great for sharing.

Where to eat it: Lau Pa Sat

The World's 50 Best Restaurants 2019 list will be unveiled on June 25th in Singapore, with a full programme of events including #50BestTalks, MasterClasses and the annual Chefs' Feast. Stay tuned to find out how to be involved.

Now watch the highlights from the 2018 event programme in the Basque Country of Spain: