The story of Mexico City speakeasy Hanky Panky – which debuted in the list of The World’s 50 Best Bars 2021 at No.12 to win the Disaronno Highest New Entry Award – is inextricably linked with the times we live in. It’s a story about overcoming odds, about friendship and about the unrelenting nature of the global bartending community to unite through challenging times

Walter Meyenberg didn’t deliberately set out for Hanky Panky to be one of the most successful bars in The World’s 50 Best Bars list, announced in December 2021. Although in making the best of a tough situation, he elevated Mexico City bar’s offering, brought the global bar community together, and earned his venue the Disaronno Highest New Entry Award for its spot at No.12, as the bar which landed in the list for the first time in the highest position.

“We just started doing different things to show the world that we weren’t going to stop, and that we were going to do everything we needed to survive,” he says.

Meyenberg realised that the best way to send this message was to bring fellow bartenders and bar operators to Mexico, taking advantage of the country’s relaxed restrictions to inbound travel throughout 2021. 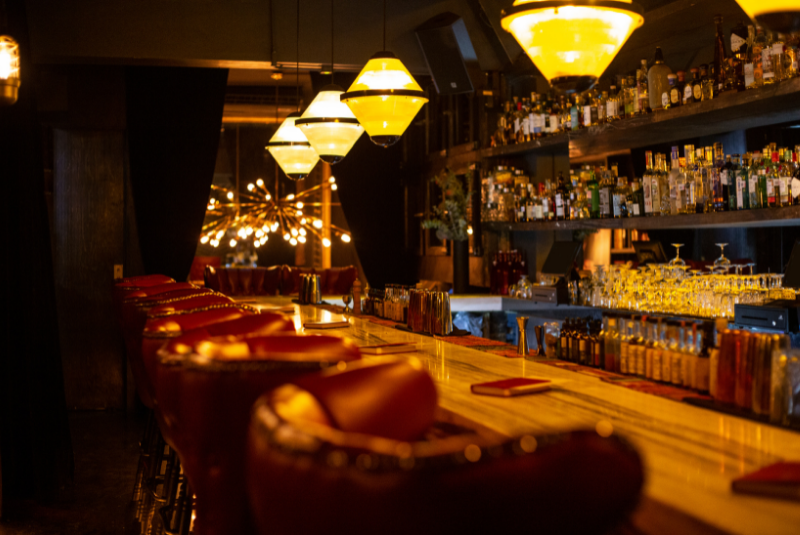 The interior of Hanky Panky, based in Mexico City

“Nikos [Bakoulis of The Clumsies, Athens] was the first person I invited, in the middle of the pandemic in March last year. He replied saying ‘Brother, if you can get me into Mexico, I’ll be there with you’,” laughs Meyenberg. “It was a crazy ride. We flew him through Turkey to Russia, then to Frankfurt and finally to Mexico.”

For part of Bakoulis’s trip, the crew decamped to a rented house in the agave spirit heartlands of Oaxaca. It was here that conversation turned to how they could include others. “Everyone said that this had to be a big, solid family, so we started connecting with people that we love to spend time with,” says Meyenberg. “Every single person who came to Mexico was connected by friendship.”

What followed was a true cultural exchange, where each group of visitors was taken to different parts of Mexico, and also collaborated in a takeover of Hanky Panky. “For every single bar that came, we created a different experience,” Meyenberg adds. 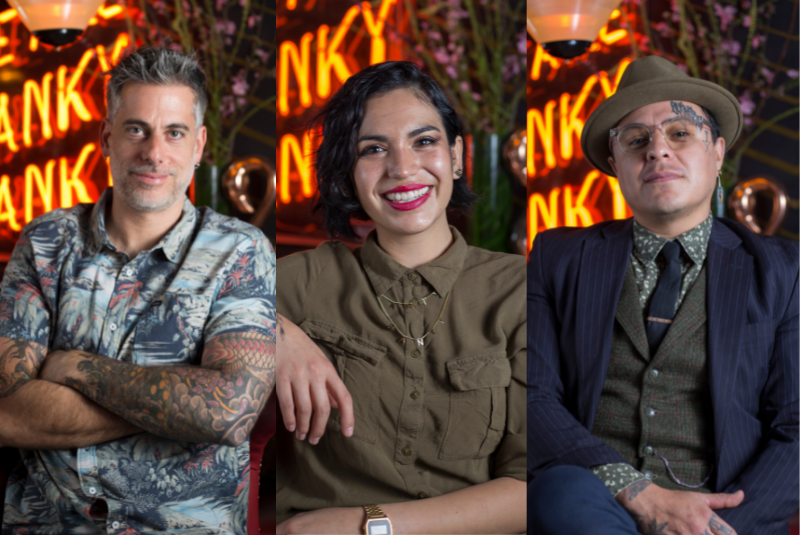 Restrictions had loosened in Mexico during the second year of pandemic, but some remained, including earlier closing times. Meyenberg created a new format for the bar, with three sessions per night of two hours each. Visitors to each session would enjoy cocktails and food that were a product of these cross-continental collaborations. It led to a greater awareness of Hanky Panky as a fast-growing institution and helped to grow its reputation on a global stage.

“It was more than a takeover. It was more like an immersive experience. You only had two hours but [guests] were able to taste the four cocktails from the bar, with food paired with each,” explains Meyenberg. “It was a different way to see hospitality and cocktails. And we only let 10 to 12 people into the bar at a time, so it was really intimate.”

In time these collaborations led to the Hanky Panky team venturing out into the world too, including a visit to Russia for Saint Petersburg Cocktail Week, and culminating in a trip to London for The World’s 50 Best Bars ceremony on 7 December 2021. “Restrictions were heavy, and we couldn’t afford to spend 15 days in London, so I planned a crazy rock-band tour around Europe,” says Meyenberg. “Everyone supported us, and it ended up being this beautiful tour, including Madrid, Barcelona, Rome, Athens and ending up at the awards. It was eight cities in 16 days, and the most beautiful experience I’ve ever had.” 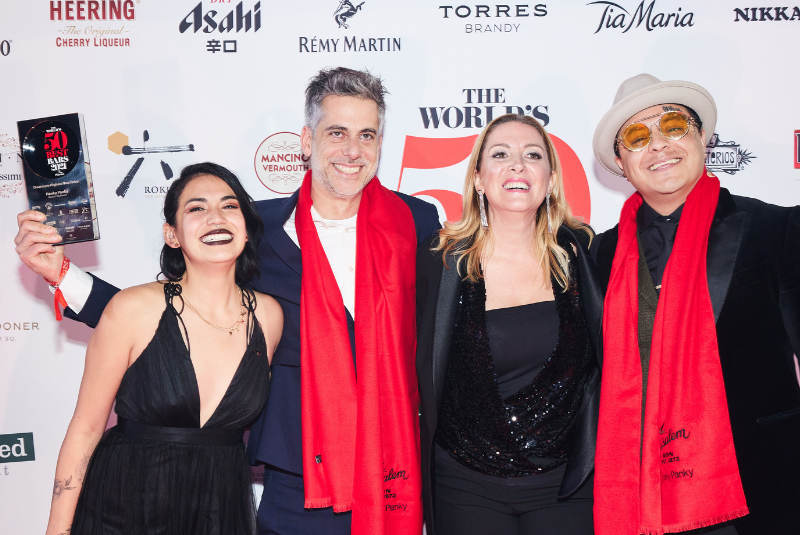 Hanky Panky came in at No.12 at The World's 50 Best Bars event in London, earning the Disaronno Highest New Entry Award, which was presented by ILLVA Saronno's Simona Bianco

Distilling a winning formula
The global pandemic might have elevated Hanky Panky’s partnerships with bartenders around the world, but the bar’s ethos has always been one of collaboration, friendship and community.

“I love humans, and relationships,” says Meyenberg. “I’m a hippie, man. What can I say?”

The original idea for Hanky Panky, over six years ago, was to create a private bar just for friends. Meyenberg found a burnt-out restaurant that had been abandoned for 30 years, alongside a car and tyre workshop. He turned the workshop into a Mexican fonda inspired by Oaxaca. Through the bathroom was a secret steel door with fingerprint access, leading to Hanky Panky. “We wanted to have this secret vibe like an Italian pasta joint in New York where you go through the kitchen. It was a real mafia cartel speakeasy – really secret – and it got so hyped, because every time you got in, your friends were there already.”

The name, as well as every other aspect of the 40-capacity bar, was inspired by Ada Coleman, who became head bartender of the American Bar at the Savoy Hotel in London in 1903. “I was amazed by her story, as one of the first female bartenders in London,” says Meyenberg. 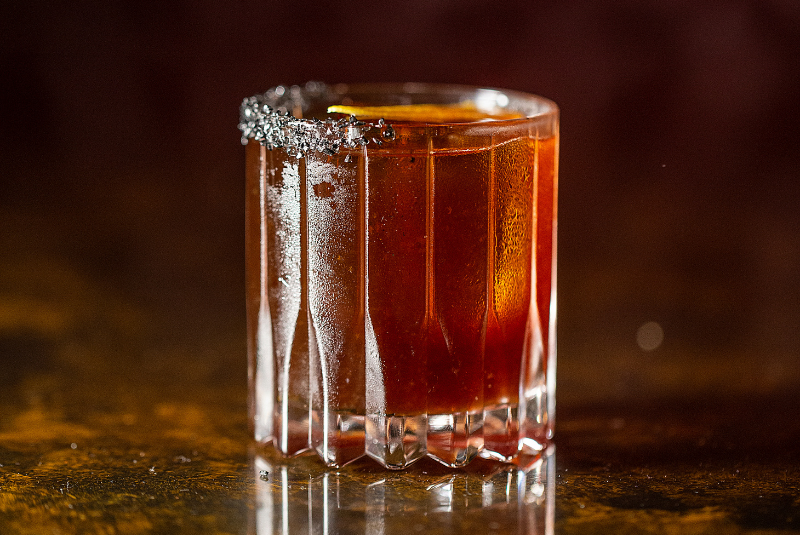 One of Hanky Panky's signature cocktails, called In Search of Delicious

A classic cocktail list was therefore inevitable, inspired by Coleman and her time at the Savoy, alongside a food menu from the in-house chef. But the cocktail list always featured five or six cocktails created by bartenders around the world too. “We were always making community,” remembers Meyenberg. “It’s fun, because people in Mexico are able to taste cocktails from bars around the world.”

That family approach is reflected in the bar team too, mostly unchanged for the past five years. Ismael ‘Pollo’ Martínez and Gina Barbachano, who were on stage in London to receive the award with Meyenberg, are now business partners too.

The cocktail list at Hanky Panky has been seasonal from the outset, changing according to Mexico’s distinct seasons. The latest iteration, entitled Passport, takes further inspiration from the team’s travels over the past two years, not to mention its international guests over that period.

“In Saint Petersburg, the cherries were amazing, so we want to do something with them, and the same goes for ingredients we encountered in Italy and Greece. And we obviously want to include drinks from bars around the world too,” says Meyenberg.

And it’s not just the menu itself that’s changing. He’s aware of the challenges that come with the bar’s elevated ranking in the list of The World’s 50 Best Bars, sponsored by Perrier: “I was talking to Gina and Pollo, saying that we need to be the same people, the same humans who had a dream and fought for it – but at the same time, we need to be better.”

Catch up on everything that happened at The World's 50 Best Bars 2021:
The 13th edition of The World’s 50 Best Bars was announced on Tuesday, 7th December, 2021 at a live awards ceremony in London. To stay up to date with all news and announcements, browse the website and follow us on Facebook, Instagram, Twitter and YouTube.