Heston Blumenthal: “You need the freedom to fail”

In the latest instalment of our Best and Beyond series, presented by Miele, we look at the impact of Heston Blumenthal, the hyper-creative force behind game-changing British restaurant The Fat Duck.

There’s nothing ordinary about dining at The Fat Duck – from the booking process to the petit-fours, from the innovative dish presentations to the original flavours combinations. And that, of course, is at the heart of the restaurant’s enduring appeal. Heston Blumenthal’s hyper-experimental flagship might not offer the locals much by the way of a quick bite – although his two nearby pubs certainly do – but its 17-course, £255 tasting menu remains one of the world’s most thought-provoking, technically adept and exhilarating dining experiences.

On this menu, nothing is quite as it seems. The ingredients of a Waldorf salad turn into an ice cream; a golden pocket watch vanishes in hot water to create a soup; a virtually weightless beetroot and horseradish macaroon disappears on the tongue.

What’s even more amazing is that some 20 years after opening, The Fat Duck – located just to the west of London in the upmarket village of Bray – remains a relevant and hugely influential restaurant.

Over the past two decades, Blumenthal has developed hundreds of new cooking techniques, and a great many of these have found their way onto the menus of other ambitious restaurants. He was the first person to recognise the culinary potential of liquid nitrogen. He was an early adopter of sous vide cooking. He pioneered the use of different gelling agents to deliver a hitherto unknown clarity of flavour. He gave the world triple-cooked chips.

In the wrong hands, all this would have been for nothing: fancy cooking techniques do not a great chef make. But Blumenthal is able to combine all this culinary know-how with a child-like sense of wonder and excitement to create some of the restaurant world’s most iconic dishes: Snail Porridge, Bacon and Egg Ice Cream, the Alice and Wonderland-inspired Mock Turtle soup, and his famed Meat Fruit to name-check but a few.

Yet more important than all these individual innovations and brilliant dishes is the 51-year-old chef’s constant questioning of established culinary practices and his striving for continual improvement, or as he describes it “restless development”.

Blumenthal was also among the first chefs in the world to understand the importance of a separate development kitchen and development team, and this approach has influenced the way many other high-reaching establishments are run.

“The professional kitchen is not creative,” he explains. “It’s a manufacturing line. The Fat Duck is a measured and precise place because we need consistency. All of that is the enemy of creativity. Discovery and creativity need to take place in an environment that does not have an outcome – you need the freedom to fail.” 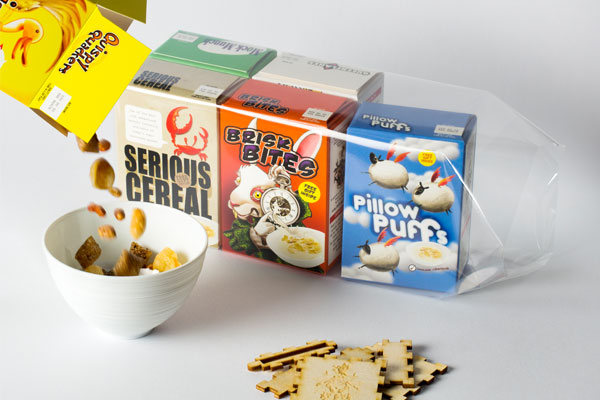 Savoury cereals at The Fat Duck

Blumenthal’s leftfield approach to his work is partly due to his equally unusual route into the cheffing world. Unlike the majority of his peers, he has had minimal professional training or experience in top-grade kitchens.

Born in London, he found his interest in cooking piqued when he was taken to a Michelin-starred restaurant in southern France while on a family holiday (more on this life-changing event later). After school, Blumenthal began an apprenticeship at Raymond Blanc’s prestigious English country house hotel, Le Manoir aux Quat'Saisons in Oxfordshire, but left after just a week.

He spent the next decade or so working a string of relatively undemanding jobs by day and teaching himself classical French cooking by night. A chance encounter with a then little-known book by American scientist Harold McGee changed Blumenthal’s course, empowering him to question established culinary practices, such as searing meat to ‘seal in’ the juices.

The Fat Duck opened in 1995 as a low-key bistro set within a former pub – premises that had seen better days. But despite a basic kitchen and tiny team, Blumenthal soon started making a name for himself, pioneering new techniques and gradually increasing the complexity of the dishes. The Fat Duck attracted increasing attention from the UK’s leading food critics and in 1999 the restaurant won its first Michelin star, followed by a second two years later. In 2004, it was awarded a hallowed third star, and in 2005 it was ranked No.1 in The World’s 50 Best Restaurants list – the first and only British restaurant to hit such heights.

By the late Noughties, the chef was making a number of increasingly popular TV shows, one of which inspired the historical British menu that underpins Dinner by Heston Blumenthal. Opened in 2011 within London’s Mandarin Oriental Hyde Park with executive chef and long-time Blumenthal acolyte Ashley Palmer-Watts at the helm, the restaurant was an instant hit. Dishes including Meat Fruit – silky chicken liver parfait fashioned to resemble a mandarin – and spit-grilled pineapple Tipsy Cake have become iconic in record time. 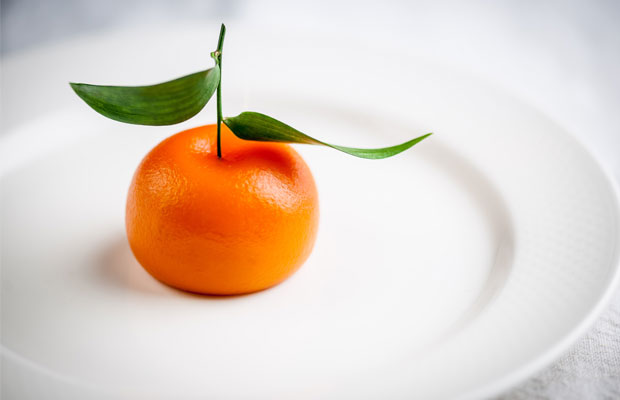 Blumenthal body of work is considerable – he has teamed up with dozens of scientists and other experts, from behaviourists to famous musicians – yet he wants to be remembered for one simple but very important idea: ‘multi-sensory cooking’.

It all leads back to that Provençale restaurant, L'Oustau de Baumanière, of his youth. The food was amazing, sure, but there was more to it than that: the smell of lavender in the air; the sound of the cicadas; the quality of the light. It was here that the idea of multi-sensory cooking germinated in the febrile mind of young Heston.

Four decades later, he is still piecing the jigsaw puzzle together. “It’s so massive. It’s what we’ve been doing for the past 15 years,” he says. “The senses are all ingredients – what we hear, smell, see and touch. All of that plays a major role in the enjoyment of food. I want to control what diners feel. It sounds cheesy, but restaurants are in the business of emotions. I want to leave this world a happier place than I found it.”

There’s no question that Blumenthal’s ability to push culinary boundaries has made him one of the most important chefs of his generation. One aspect that sets him apart from the majority of his top-flight gastronomic peers is the ability to make what he does accessible to the general public.

From his early newspaper columns to a recent mission to make sure British astronaut Tim Peake could enjoy a cup of tea and a bacon sandwich in zero gravity, Blumenthal and his team’s exploits have been well documented. His media output ranges from the fun but slightly pointless – “let’s build a life-size ginger bread house!” – to some of the most original food and drink programming of the era, not least the brilliant In Search of Perfection series for the BBC, where Blumenthal created ‘perfect’ versions of everyday dishes.

His work with British supermarket Waitrose reaches an audience of which most three-star chefs could only dream. Since 2010, he and his development team have been designing dishes for the upmarket grocer, bringing unusual flavour combinations – most recently a headline-grabbing banana and bacon trifle – to the mass market. Cleverly, Blumenthal has rolled the research for Waitrose into his development work for his two pubs, the Michelin-starred The Hinds Head and the more everyday The Crown, both in Bray, as well as The Perfectionists Café in London’s Heathrow Airport. 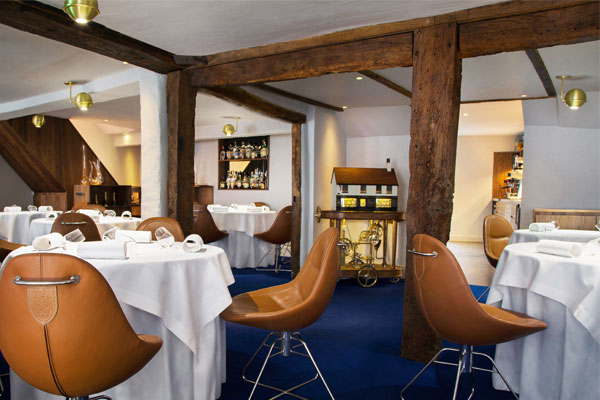 Inside The Fat Duck

Blumenthal is no stranger to awards. His metaphorical mantelpiece is buckling under the weight, in fact. Not only has The Fat Duck been named The World’s Best Restaurant, it was also ranked number two five times. It retains three Michelin stars, while Dinner in London boasts two of its own.

The now celebrity chef has an OBE, his own coat of arms, an alphabet’s worth of honorary letters after his name and even a Lifetime Achievement Award from The World’s 50 Best Restaurants, an honour that sees the chef join such luminaries as Alain Ducasse, Joël Robuchon, Thomas Keller and Juan Mari Arzak.

In trademark super-energised fashion, Blumenthal says of the latter award: “It’s a massive honour, but part of you can’t help wondering whether you’re being put out to pasture. This is a major new chapter for me. I consider the past 20 years to have been my apprenticeship. I’m only just getting started.”

Two years ago, The Fat Duck reopened following a six-month sojourn in Australia (the Melbourne hotel that housed the sell-out pop-up is now home to a permanent incarnation of Dinner). Some £2.5m has been invested in the chef’s flagship (including a staggering £250,000 for the mechanical sweetshop that dispenses the petit fours), which famously employs more than 60 staff to feed 40 customers.

While the low-ceilinged dining room retains a similar layout and feel, the rest of the Grade I-listed building has been reworked. Most importantly, long-standing head chef Johnny Lake finally has a kitchen that befits the calibre of the restaurant (its previous incarnation was risibly small, especially considering it has to accommodate 14 chefs in any given service).

In truth, the awkward 16th-century building that houses the restaurant has a lot to answer for. Some of Blumenthal’s earliest innovations were designed to get around the challenges the space presented. For example, he first started experimenting with liquid nitrogen because the low-poured domestic-grade gas supply at the restaurant was stopping him from preparing green beans in the traditional manner.

“The Fat Duck has been my life,” he says. “The restaurant has shaped me more than any other thing or person on this planet. It’s housed a lot of my memories. In fact, the whole thing is based on memories and emotions now.”

Over the two decades The Fat Duck has been open, Blumenthal has delved deeper and deeper into memory and, specifically, nostalgia. The most notable change at the new incarnation is the introduction of a single narrative thread that binds the entire meal. The meal is based on a fairy-tale holiday, something he believes everybody can relate to. It draws loosely on his own experience, although he admits there has been a degree of inflation and conflation.

The whole experience is designed to trigger nostalgia, which Blumenthal believes is a potent force. “Auschwitz survivors said that while they were in the camp the thing that kept them the most warm was nostalgia,” he explains. “Accessing a happy memory can warm you up, that’s been scientifically proven. Memory is thought of as a dusty treasure chest that we’re supposed to hide away. In fact, we should be accessing memories all the time. We should be looking at our lives in both directions.”

The next restaurant Blumenthal is likely to open will be another Dinner – a concept that was conceived with the idea of spreading to major cities across the globe. Blumenthal no longer cooks at any of his restaurants, but remains heavily involved in dish development across the portfolio at home and abroad.

A father of three, Blumenthal has long been an advocate of inspiring children to be excited about food and cooking. Indeed, his first cookbook, Family Food – published way back in 2002, just as 50 Best was born – was full of relatively simple recipes designed to teach kids about the science of food.

Blumenthal was diagnosed with a hyperactivity disorder last year, and recently spoke out about the UK’s ‘Victorian’ school system, which he says stigmatises kids with ADHD. He believes that children can only be creative if they are taught not to be afraid of failure. Blumenthal says his hyperactivity allows him to work on multiple projects simultaneously. While the condition does bring with it some challenges, it is at least partly responsible for this great chef’s restless and – it must be said – quite extraordinary mind.

Now go inside The Fat Duck with Heston Blumenthal:

In our Best and Beyond series, presented by Miele, we've spoken to chef-restaurateurs of all the past and present No.1s in The World's 50 Best Restaurants. Get to know Heston's fellow restaurateurs, Joan Roca, Massimo Bottura and Ferran Adrià.