When Julien Royer left award-winning restaurant Jaan to start his own project in 2015, anticipation was high. Less than two years later, he has surpassed all expectations, with Odette earning two Michelin stars within nine months and now a coveted place on the Asia’s 50 Best Restaurants list.

At No.9, not only does Odette win The Highest New Entry Award, sponsored by Mekhong, it is also the highest new entry to the list since its inception in 2013. Here, the French-born chef talks about the challenges of opening his own place.


Growing up in the south of France, chef Julien Royer doesn’t remember ever going to the supermarket. In an agricultural area known for having “more cows than people,” he says his maternal grandmother, Odette, sourced all the ingredients from the family farm, applying simple methods to simple produce.

Grandma Odette would later lend not just her name but also her philosophy to Royer’s first solo restaurant, which opened in Singapore in November 2015. “What I most retain from my Grandma is that you can bring so much happiness and joy to people through food,” says Royer. “I’m from a humble background – we didn’t have much money, but she taught me you could cook something very good from the simplest of ingredients.”

Perhaps the dish that epitomises what Royer calls his ‘essential cuisine’ approach is Hokkaido Uni, which features just four ingredients, each bringing something to the plate: sea urchin for sweetness, caviar for salt, langoustine for texture and Granny Smith apple for the crunch. A winner with customers, this pretty-looking dish achieves just the right balance of its four components, without so much as a sprinkle of seasoning. 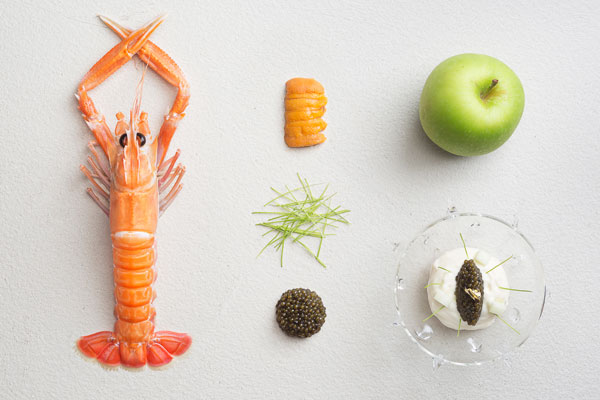 Royer was a highly creative chef at Jaan, the sky-scraping restaurant in the Swissôtel The Stamford, Singapore, where he led the kitchen from 2011 to 2015. But in the hotel restaurant environment, he didn’t have the freedom to dictate beyond the plate, and thus began to think about opening his own place. His daydreams turned into reality after he met business partner Wee Teng Wen, a regular guest and supporter of Jaan who was keen to back Royer’s new project.

“Going from a chef de cuisine job to a restaurateur is really a new learning experience,” he says. “I was given a lot of freedom and was able to appreciate every aspect, from the design to the chinaware to the decoration, the music and the atmosphere of the restaurant. It was really cool for me to not just be a chef but to be able to create an entire experience that makes sense – which was not the case before.”

That experience was brought to life at the iconic National Gallery Singapore, in a space decorated under the creative direction of Singaporean artist Dawn Ng. Featuring a glass-enclosed kitchen and a soft colour palette, the interior respects the historic location while complementing the colourful, delicate-looking dishes on Royer’s six- and eight-course modern French tasting menus.

With just 12 tables and a small private room seating six to eight people, Odette is booked up two months in advance for weekends and four to six weeks for weekdays. Most of the front-of-house team is new to Singapore, with Royer’s General Manager Steven Mason coming all the way from The Ledbury in London. Part of the restaurant’s success, Royer says, was being ready on day one.

“The most challenging part is the opening itself,” he says. “We were expected to be good straight away so there was a lot of pressure. We did okay – not great, but we delivered something quite good from the start. I’m never satisfied with what we do and I think about doing it better every day, but you have to step back and say ‘Wow, this is what we did on the first day and it’s actually quite good’.”

Quite good, we suspect, is an understatement.


Watch the moment when Chef Royer told his team that Odette had made the Asia's 50 Best list: