When El Bulli closed its doors in 2011 as the only five-time No.1 in The World’s 50 Best Restaurants, its three head chefs decided to embark on an adventure of their own. But instead of going straight to avant-garde cuisine, they started with an informal restaurant called Compartir, meaning ‘to share’.

Before long, they were keen to return to their natural habitat of ultra-creative gastronomy and they opened Disfrutar, meaning ‘to enjoy,’ in Barcelona. Two years on, the restaurant of Oriol Castro, Eduard Xatruch and Mateu Casañas has made a significant gastronomic impact, in Spain and beyond. But their only aim, they say, is to keep evolving and for their diners to enjoy their food just as much as they enjoy creating it.

When you worked with Ferran Adrià at El Bulli, did you ever dream of opening your own restaurant together?

Oriol Castro: Our only dream was for El Bulli to be the best restaurant in the world.

Eduard Xatruch: We never discussed doing anything on our own until the very end of that final season. But even then, we didn’t consider doing avant-garde cuisine, but instead something much more simple, which was Compartir.

Mateu Casañas: The three of us worked under Ferran Adrià for almost 15 years and we fought many battles. We were involved in the El Bulli Foundation and we realised we could incorporate what we’d learned there into a practical project. On a trip to Istanbul, between numerous flights and cups of coffee, our idea started to take shape, and when we found the site we didn’t want to delay its opening. But until that moment we worked as a team with just one shared objective, and that was to put El Bulli above all else.

Have you ever worked by yourselves, not as a team?

OC: At Disfrutar, we're not individual personalities; we’re a collective of three. We all believe in a project and none of us has more weight in it. We just organise ourselves in whatever way seems most practical.

Were people’s expectations of you higher because you came from El Bulli?

EX: When we opened Compartir, we could feel the scrutiny. We knew how hard it was to run a creative restaurant and that people would compare us with El Bulli. For that reason, we didn’t want to put the cart before the horse. Compartir was the foundation for what we’ve built.

OC: At Compartir, we didn’t want to do creative cuisine. We got tired of telling people it would be nothing like El Bulli and that it would be something really simple. 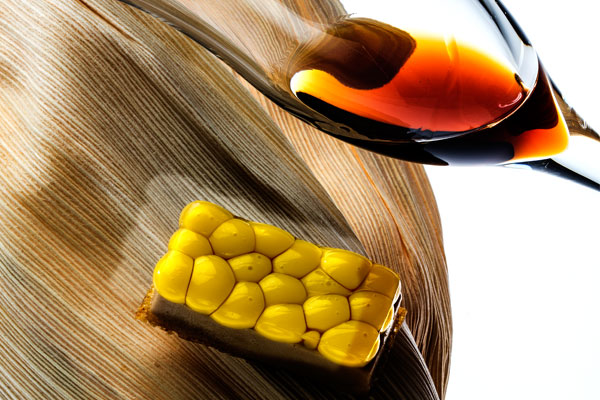 But you ended up doing avant-garde in the end. Do you think creativity runs in your veins?

EX: We needed to open Disfrutar. We had three families to feed and one restaurant wasn’t enough to live off!

OC: But we had that desire to create and to evolve. We do have creative cuisine inside us. We are more and more comfortable and in two years we have evolved so much.

Wasn’t it brave of you to do it with such a big team?

OC: We had to do things well. We couldn’t fail. There was no margin for error because people’s feedback is so important – especially today, when everything is so immediate because of social media.

Was it stressful to have so many people depending on you?

MC: You can stress over it but if it comes off well, it can be a positive thing to be under the lens.

EX: In the beginning, we needed a certain level of calm and that’s why we did it in Cadaqués. But when we decided to open in Barcelona, we knew what we were getting ourselves into. We knew with this project there was a lot at stake – economically, in terms of reputation and in every other way. 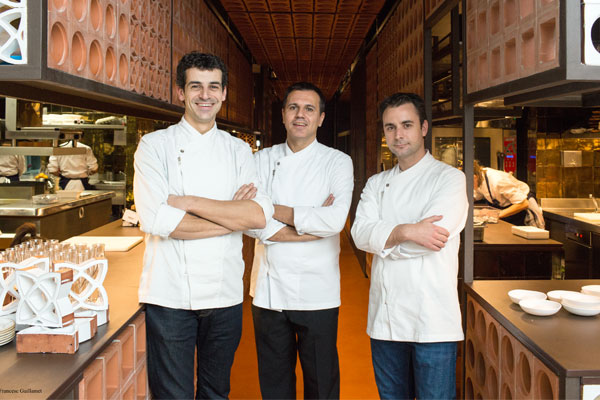 How do you feel about being named Miele One To Watch?

OC: We never imagined we would win this award from The World’s 50 Best Restaurants. Even if at El Bulli it became normal for us to be at the very top, it now feels absolutely incredible for us to be recognised. It spurs us on. And to be named among the 100 best restaurants in the world, when there are millions of others, is a dream.

Do the three of you usually agree on everything?

MC: Yes. Our collective experience adds up and when one of us isn’t at our best, another of us might take the lead, so the machine never stops. Anything negative that comes from being a three is more than offset by the positive. In terms of security, ways of working… it’s just much better.

OC: Three is a good number. Look at El Celler de Can Roca. They’re a three, even if they’re a family.

EX: Also, there’s no good chef who doesn’t surround himself by good people. The only atypical thing is that all three of us are chefs.

You decided to do the project alone, without a business partner. Why was that?

MC: When we were looking for our path, we were very clear that even though it would take more effort, we wanted to be in charge of our own destiny. We were willing to invest our own money for absolute freedom.

OC: We can always improve because we reinvest. Our obsession is to get better and better.

EX: If we had a business partner, the moment we received our first caviar we would be asked to substitute it for trout eggs.

Is there a particular dish that reflects your cuisine right now?

EX: The caviar sandwich with spongey brioche created with a particular technique that allows us to fill it with such a delicate, fresh product. Also, dishes like corn on the cob, which reflects the multi-spherification technique that we’ve developed and which is used in many kitchens. And the whisky tart, where we let the customer experience aroma by perfuming their hands with drops of whisky.

OC: It is. I think people appreciate the way we interact with customers. We’ve grown up with creative cuisine and we believe we really know what true creativity is and what does and doesn’t make sense. We don’t do things just because. We’ve learned to reflect and self-criticise and that’s really important in this sort of restaurant. 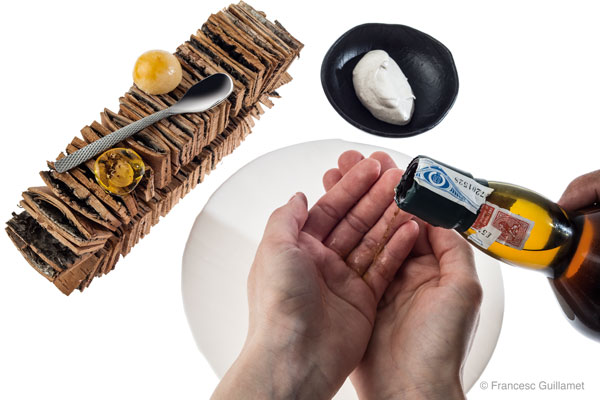 
What would you ask of your customers?

OC: We want them to choose our longest menu because that’s where we best express ourselves. We have a lot of different stories to tell and we can do it better with our menu of 25 or 26 courses.

Is cooking in full view of diners in your case an essential way of working?

MC: We have a direct link with the customer. Dynamism, surprise… there’s no time for the diner to get bored. We’re not in full view in order to show off but because we need real control of the table and to be able to see the rhythm that each table wants to go at. The rhythm comes from the kitchen but the dining room is also a big part of it.

EX: People who aren’t familiar with creative cuisine tend to expect fireworks and that’s something we try to avoid. We haven’t used liquid nitrogen yet… we avoid anything that might be perceived as superfluous. We don’t want to make a show for show’s sake.

OC: Nobody should expect the format of a big, luxurious restaurant. Disfrutar is not that. We want to be nearby and we want people to enjoy themselves without giving up on comfort and excellence – and we want to enjoy ourselves too.


This interview is translated from Spanish.

Take a look inside Disfrutar:


The 51-100 list of The World’s 50 Best Restaurants 2017 will be announced on Tuesday 28th March on our website and social media channels. The full 50 Best list will be revealed at ceremony  in Melbourne, Australia, on Wednesday 5th April – follow the livestream.