Bangkok restaurant Sühring entered the Asia’s 50 Best Restaurants list at No.13 this year, less than 12 months after opening. We caught up with the Sühring chef twins to find out how they wooed a Thai audience with their inventive modern German food.

Most husband-and-wife or sibling teams in the restaurant industry take on different roles so as not to clash: one is the business brain, the other the creative; or one is in the kitchen, the other front of house. But at Bangkok restaurant Sühring, identical twin chefs Mathias and Thomas Sühring perform exactly the same roles all of the time, and most people can’t tell them apart.

“Since we’re twins and not brothers, we’ve very connected to each other and most of the things throughout our life we’ve done together,” says Thomas. “We create dishes together, so there’s no separation of who does what.”

During service, typically one brother will take hot food and the other cold, and they’ll swap at a later date. Everything is done together, from conceiving dishes to doing the paperwork and socialising.

So far, the approach has served them well – just one year after opening their eponymous restaurant in Bangkok, Sühring has entered the Asia’s 50 Best Restaurants list at No.13, the second-highest new entry on the list after Odette in Singapore. Their modern German food in a beautiful house is charming everyone from the Thai locals to gastronomes from across Asia and beyond, and the brothers say it’s partly the relaxed sharing element that appeals.

“Thai people like it very much,” says Mathias. “Sometimes it feels a bit similar, not in terms of flavouring but in terms of how we eat. We call it gemütlichkeit when we sit around the table with the family, sharing dishes. We do it with our brötzeit bread course with different condiments – you interact around the table and it’s something that’s also familiar to Thai food culture.” 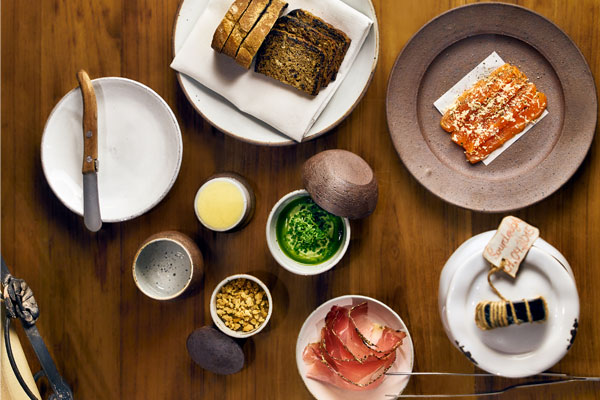 
Serving German food was a risk for the twins, not just because the style of cuisine is practically unheard of in Asia but also because they’d never cooked it professionally. They  trained in French cuisine and worked in Italy and the Netherlands before moving to Asia, where they ran the kitchen at Mezzaluna at LeBua in Thailand until opening Sühring last year. Now, for the first time, they are cooking according to their own heritage.

“The inspiration for the dishes is mostly from childhood memories, what we ate when we were small and what we did on our Grandma’s farm,” says Thomas. “We haven’t cooked German food since we left Germany so to go back and think about our childhood memories helps us present our dishes in a different and contemporary way.”

So authentic is their food that the twins still use an old recipe book that belonged to their grandparents and was passed down through their parents. Courses such as Grandma’s Eggnog, presented in a miniature bottle at the end of the dish, are direct references to their upbringing.

The restaurant previously served as a residence for people working at the nearby embassies and is now repurposed to make use of its multiple floors and rooms and a beautiful, leafy garden.

“It fits with our concept because it reminds us of our Grandma’s farm with the garden surrounding it and the peacefulness,” says Thomas. “That’s why we chose it – to be our home and at the same time a place where we can invite the customer to have a new German experience.”

That new experience takes diners through a 12-course tasting menu of German bites, including soft pretzel and Obatzda, Bismarck herring and the aforementioned brötzeit sharing course, which comes mid-meal.

It was Gaggan Anand, chef-owner of the eponymous No.1 restaurant in Asia’s 50 Best Restaurants, who helped convince the twins to open their own restaurant, in which he holds a minority stake. A year on, it’s clear the chef doesn’t regret his investment.

“The success of Sühring with locals is because we gave something new to Thailand and to Bangkok,” says Anand. “It sounds capitalistic, but I actually bought my own competition.”

See how the Sühring twins make their signature Spätzle: