Inside Eleven Madison Park: The Next Chapter – excerpts from Daniel Humm’s memoirs

To expect anything less than the best from the owner of the world’s No.1 restaurant would be foolish. But Daniel Humm’s latest cookbook-cum-memoir, Eleven Madison Park: The Next Chapter, raises the bar in the way only Humm and his co-owner Will Guidara can do.

A 500-page tome with a limited run of 11,000 copies, each one hand-signed by Humm and Guidara, The Next Chapter is half filled with recipes for the Swiss chef’s award-winning dishes and half a collection of moving tales from his 25 years of cooking and beyond. It is as reassuring and motivating for young chefs starting out as it is nostalgia-provoking for New Yorkers and cooks whose paths have crossed with Humm’s over the years.

Notably, Humm finished the book before Eleven Madison Park became the World’s Best Restaurant in June this year. Since then, he and Guidara closed the restaurant and upped sticks for three months to The Hamptons, where they had their EMP Summer House pop-up, and in September they reopened Eleven Madison Park with a new kitchen, dining room and menu. There is undoubtedly a whole new chapter to be written but, for now, here are some highlights from the book.

On being an immigrant in New York:

“For me, New York City is the physical manifestation of the American Dream. I am an immigrant. I came to America on a Lufthansa flight, and made my way into my new life – a little apprehensive, a bit jet-lagged, but bursting with hope and promise.”

On the early days at Eleven Madison Park:

“Upon my arrival in New York, Eleven Madison Park got worse. Really bad. We never closed the restaurant while we were trying to transform it. Guests who expected a big, brash brasserie came in one day for their oysters and steak frites and got instead an avant-garde and unfamiliar menu. When I took French fries off the menu, there was a revolt. I cut the portion size of most dishes in half. I had no staff. I had no cooks. And I was making what customers we did have very, very angry.”

On the three essential tools every chef should own:

“First, a well-made saucepan – one that is sturdy and transfers and retains heat well.

“Next, a quality chef’s knife. This does not mean a $1,000 knife. This means a knife that feels comfortable in your hand, that is well balanced and constructed with care; a knife that can form a sharp edge and hold it and that can be used for a wide variety of tasks and excel at all of them.

“And finally, and perhaps most surprisingly to those who don’t work in a professional kitchen: a cake tester. A cake tester is a simple, perfect thing.”

On his honey-glazed duck with lavender and spices:

“If Eleven Madison Park were to have a signature dish, it would have to be this duck, which has been a mainstay on our menu for many years. Season to season, the presentation or accompaniments can change, but the duck itself does not. To truly achieve the results you find in our restaurant, dry-aging is absolutely necessary.” 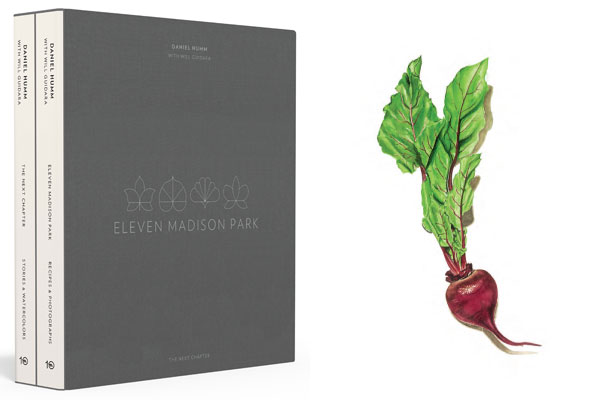 The cookbook and an illustration by Janice Barnes

On brunch and the origins of his Eggs Benedict dish:

“We don’t brunch in Switzerland. I didn’t understand this freewheeling, crazy, super-fun meal until I made my way to New York City.”

“He told me, “Cooking is like being in a dream. I am falling more and more in love with it the older and older I get. I believe that many of the great artists of the world – the painters, the composers, the authors, the architects – they produced the greatest work later in their lives. I’m thrilled that I believe the same is true with chefs.””

On Daniel Boulud and champagne showers:

“He grabbed two bottles of Champagne, took me by the hand, and we stepped on top of the bar, facing the crowd. Daniel taught me how to shower the crowd in Champagne and act totally ridiculous.”

These excerpts are reprinted with permission from Ten Speed Press and Eleven Madison Park: The Next Chapter, by Daniel Humm and Will Guidara with illustrations by Janice Barnes and photographs by Francesco Tonelli.

Now read and watch our exclusive interview with Daniel Humm:

Check out our guide to 50 Hours in New York, including a trip inside Humm and Guidara's NoMad Bar: