Got beef? Here’s the ultimate guide to wagyu

With the list of Asia’s 50 Best Restaurants 2020, sponsored by S.Pellegrino and Acqua Panna, now set to be revealed through a virtual awards ceremony on Tuesday, 24th March, we dive into wagyu to understand what Japanese beef is, how to cook it and how it’s best to eat it

Wagyu: the fabled, richly marbled, melt-in-your-mouth beef of Japan. Sometimes described as “the Rolls-Royce” (or even “the caviar”) of beef, it’s one of Japan’s most iconic food products, and one that any meat-loving visitor to Japan should try. Let’s spell out what makes this beef so special — and dispel some of the myths and misconceptions about this piece of pristine produce.

What’s in a name?

The word wagyu simply means “Japanese (wa) cattle (gyu)” and is also used for the beef from those bovines. However, the name does not apply to all beef produced in Japan. To be called wagyu, there are very specific criteria.

It’s all about the bloodline and DNA — and the history of beef eating in Japan. Until the 1870s, the eating of all four-legged animals was considered taboo due to religious and social strictures, as well as the isolationist policy during the era of the Tokugawa shoguns (1603-1868). Before this time, oxen were kept only as draft or agricultural animals.

After the Meiji Restoration, as Japan slowly opened up to the outside world, there was demand for meat from the foreigners in Japan’s treaty ports. But the taste for beef only caught on among the local population after the new Emperor Meiji issued a proclamation in 1871 stating that it was unreasonable to abstain from eating meat.

From the late 19th century, various European breeds such as Angus and Simmental were introduced and cross-bred with Japanese cattle. By the 1920s, the growing beef herds started to be registered, selected and, in 1944, eventually classified as four specific wagyu breeds: Japanese Brown; Japanese Polled; Japanese Shorthorn; and Japanese Black, which now constitutes over 90% of the nation’s beef herds.

Today, there are up to 200 strains of wagyu cattle produced throughout Japan. Of these, the best known — and most highly rated — are Tajima-gyu (from Hyogo prefecture); Matsusaka-gyu (Mie); Ohmi-gyu (Shiga); Yonezawa-gyu (Yamagata); and Saga-gyu (Saga). Of those, only Ohmi-gyu cattle are from a bloodline that does not descend from the Japanese Black population. 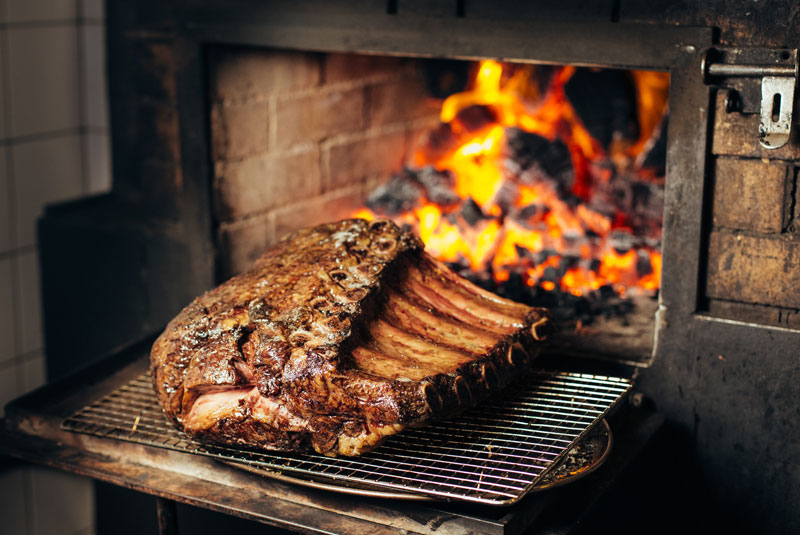 Not all wagyu cattle are equal when it comes to their meat. Yields are classified by the Japan Meat Grading Association according to the amount of high-quality meat on each individual carcass. Grade A represents the highest yield; C the lowest.

On top of this, numbers from 1 (low) to 5 (highest) are assigned to quantify the degree of marbling, the texture and firmness, colour and brightness and also the quality of the fat. The highest possible grade of wagyu is A5 and it fetches the highest prices.

There is one further index that is used to measure wagyu: the Beef Marbling Standard (BMS), which indicates the ratio of marbled fat, measured from 1 (low) up to 12.

Typically, wagyu cattle are raised for more than 30 months. This compares to an average of about 22 months for USDA beef. They generally lead quiet, pampered lives, spending much of the time confined without moving, to develop their rich marbling of fat.

The many local strains of wagyu cattle each have their own characteristics, which reflect their respective breeding and raising regulations, as well as local differences in feed — such as the pricy Olive-gyu from Shodoshima Island (Kagawa).

The best known of these strains is Kobe-gyu, source of the world-renowned Kobe beef. Named after the capital of Hyogo Prefecture, they are a subset of the prefecture’s Tajima cattle, but selected by even more stringent criteria. All cattle have to be born, reared and processed within the prefecture; they must have a carcass weight of less than 500 kg, a marbling ratio of 6 or over, and must have a meat quality and yield grade of at least 4B.

Only 3,000 head of cattle meet the requirements for Kobe each year, and all are bullocks. By contrast, Matsusaka beef is produced from heifers that have never given birth, as is Yonezawa beef. 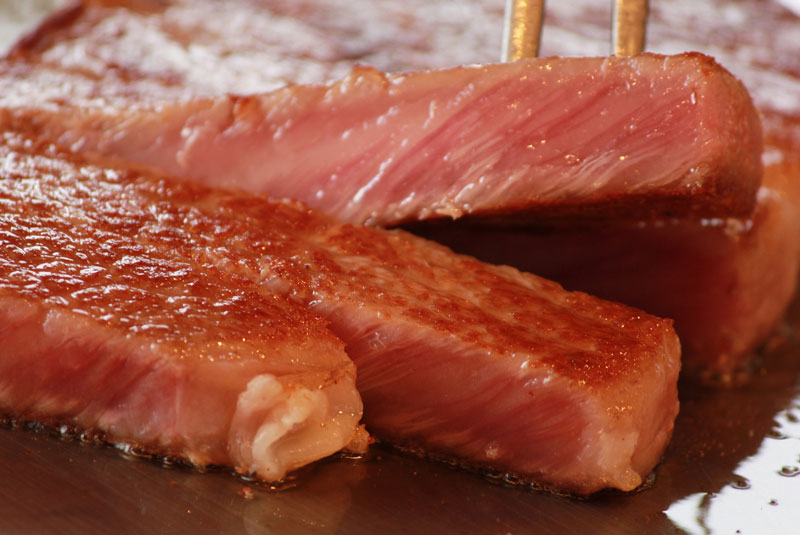 Because it was rarely eaten historically and due to its luxury pricing, when beef was finally accepted in popular culture it was initially prepared in ways that fitted the established patterns of Japanese cuisine. The two classic recipes are shabu-shabu and sukiyaki, both preparations in which the meat is cooked in pans placed at the centre of the dining table.

With shabu-shabu, paper-fine slivers of beef are briefly dipped into an open hotpot of boiling broth until lightly cooked, then seasoned with various dipping sauces. Sukiyaki, on the other hand, is prepared in a shallow skillet, in a rich, sweet-savoury broth made from soy sauce, sake or mirin (sweet cooking rice liquor) and sugar. Once the thinly sliced beef is cooked, it is dipped into a bowl filled with beaten raw egg, before being eaten.

Other popular wagyu dishes include steak, often cooked over a teppan grill (iron griddle), and yakiniku, in which cuts of beef are grilled over charcoal or electric elements set on the dining table, usually by the customers themselves.

The cuts from Japanese cattle are substantially more varied and detailed than those in the West, with terms such as zabuton (aka Denver steak) and marushin (knuckle main muscle) featuring on restaurant menus, alongside classic cuts like chateaubriand. Besides those favoured for steak, many lesser parts of the beef are also consumed, including tongue and, at yakiniku restaurants, even internal organs. 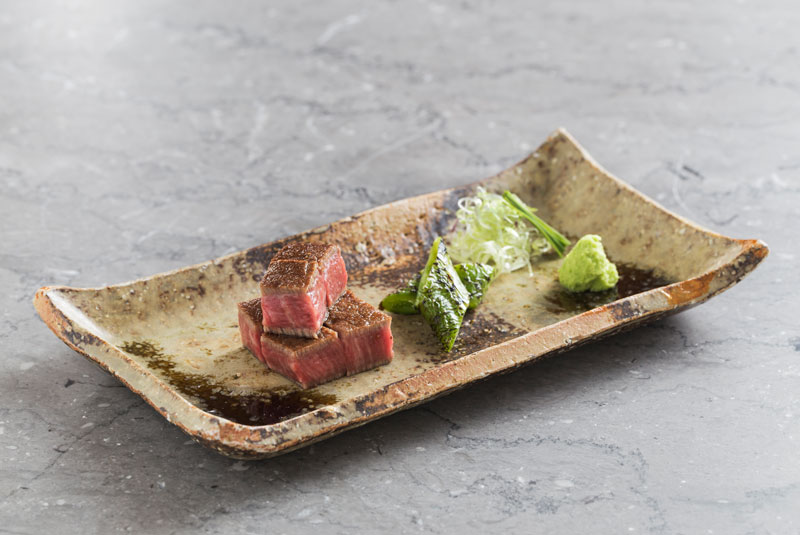 Clearing up the myths

From the 1970s onwards, typical PR posters for wagyu showed farmers massaging their giant Japanese Black cows and even tipping bottles of beer straight into their mouths. Spoiler alert: it was just for the camera, a way to illustrate the TLC they lavished on their bovine family members. Nonetheless, wagyu cattle do indeed live a pampered life, with special feeds intended to bring out an extra dimension of flavour. And yes, their hides are sometimes given a brush-down to make them look good.

One concern often voiced about wagyu is focused on its high fat content. It may imbue the meat with extra layers of umami, but isn’t it unhealthy? In fact, wagyu offers high levels of beneficial monounsaturated fatty acids, rich in Omega-3s. At the same time, the melting point for the fat from top wagyu is lower than for ordinary beef fat — hence the sensation of it actually melting in your mouth as you eat it.

Isn’t it expensive? Actually, that’s no myth: high-end wagyu does indeed cost a pretty yen at the high-end restaurants that serve it. And that is the other reason why in Japanese cuisine it is served in fine slices, as in shabu-shabu, rather than as massive steaks.

Saga Prefecture in Japan was set to be the host of the Asia's 50 Best Restaurants 2020 programme, which has now switched from an on-the-ground ceremony to a virtual event format in light of travel restrictions in Asia. 50 Best hopes to be able to facilitate further opportunities for chefs, partners and media to experience the wonderful food, culture and landscape of Saga in the future.