“The future of meat is the traceability of the food production chain” – Jefferson Rueda, A Casa do Porco

As many parts of the world move towards reducing meat consumption, one chef in São Paulo is arguing that meat is the future – but his innovative approach to pork is all about sustainability, traceability and using the entire animal. Jefferson Rueda spoke at #50BestTalks “Meat: the future,” presented by Miele, in Bogotá, Colombia.

At A Casa do Porco in São Paulo’s city centre, the humble pig reigns supreme. The restaurant, whose name means House of the Hog in Portuguese, serves pork in literally all its forms, from the cheek, served as sushi, to the trotters, tail and ears, used in croquettes, to the face and snout, made into terrines and sausages. Here, the entire menu is an homage to the hog.

At a time when veganism is gaining momentum all over the world, it may seem odd that a restaurant celebrating pork has risen to the top 10 of Latin America’s 50 Best Restaurants, but since its opening in 2015, A Casa do Porco has had queues of people around the block to sample chef-owner Jefferson Rueda’s pork paradise.

For Rueda, it’s all about respecting the animal and understanding the food production chain. Through serving cuts of pork that many diners have never seen before – such as carpaccio or pork jowl served nigiri-style on rice – he is educating São Paulo locals and international diners about the importance of raising animals that are allowed to roam freely in their natural habitat and that are then used in their entirety.

“The future of meat is the traceability of the food production chain,” he says. “That starts with the producer, refrigeration, health and safety inspection and the final consumer. My role is to connect and educate the various points of the chain.” 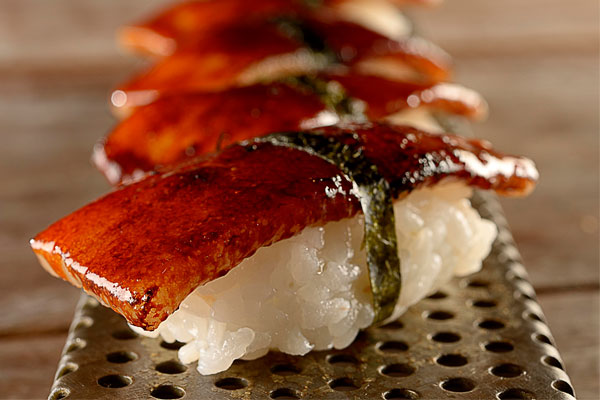 Pork sushi at A Casa do Porco

Rueda recalls a time when lard was the first exchange currency in Brazil, which remained the case until around 1945, when it was largely replaced by trans fats and vegetable oils. It was then that pigs began to be raised for pork, instead of almost purely for lard. Since then, pork has been a popular meat in Brazil for sausages, bacon and other common uses, but A Casa do Porco is introducing new ways to use the pig.

“My work is about using the whole animal and making people more aware about sustainable consumption,” Rueda says. “It’s important to have this exchange of experiences, of culture, of recipes, discussing our problems and solutions and talking about the future, which is meat.”

Header images: Porco San Zé at A Casa do Porco and Jefferson Rueda at #50BestTalks