Joan Roca: “They say I’m the leader, but sharing decisions is the key to our lasting relationship”

In the third of our Best and Beyond series, presented by Miele, we profile Joan Roca, chef-owner of El Celler de Can Roca in Girona, Spain, voted No.1 in The World’s 50 Best Restaurants in 2013 and 2015.

He’s “the perfect example of a contemporary chef,” says Massimo Bottura. He’s “generous, creative, thoughtful and warm,” according to Juan Mari Arzak. And in Jordi Roca’s opinion, he’s “capable of harmonising the impossible”.

These words could only be referencing Joan Roca, one third of the team of brothers behind the globally acclaimed El Celler de Can Roca. Often described as humble, nurturing and inspiring, he’s also a deeply competitive, ambitious and driven individual. He may be the kindest cook on the planet, but Roca makes no secret of his desire to be No.1.

Roca and his younger brothers, Josep the sommelier and Jordi the pastry chef, have seen their pride and joy top The World’s 50 Best Restaurants list twice – first in 2013, then again in 2015. Jordi was named The World’s Best Pastry Chef in 2014, Joan gained the recognition of his peers as Chefs’ Choice winner in 2016, and this year the restaurant won The Ferrari Trento Art of Hospitality Award, an accolade accepted by Josep, as head of the dining room.

But the hat trick of special awards won’t be enough until the trio of siblings have also taken home a hat trick of No.1s by winning the World’s Best Restaurant title just one more time. In 2013, Joan led the brothers on stage to collect the award; in 2015 Josep took the honour, and now the brothers would like the chance for their youngest sibling, Jordi, to lift that final trophy.

“All three of us brothers are competitive with each other and we’re also competitive as a team,” says 53-year-old Joan. “We like a challenge, we like working and we like doing things a little better every day.”

It’s not all about the awards though. Joan Roca is one of the first chefs at the top of the business not just to acknowledge publicly but to commit to change the fact that the profession of cooking, particularly at his level, is one of the hardest, most physically demanding jobs out there. He has set out to make it possible for young chefs to thrive in the restaurant industry without reaching total burnout.

“We could see talented young people were leaving the profession because the hours are so long,” says Roca. “We need to make this new generation of young people feel comfortable in the kitchen and not to feel like they’re sacrificing their lives for their passion.”

With this in mind, Roca has taken on the challenge of what he calls “humanising the profession”. At El Celler de Can Roca, they have recently developed a double team system so that instead of the same chefs doing back-to-back lunch and dinner services every day, there are now two complete teams: one for the lunch service and one for dinner. It’s a move that comes at an added expense for the restaurant in Girona, Spain, but Roca says it is worth it, and it’s an idea and a philosophy he wants to share.

From the outside, Roca has managed to juggle success with home life in exemplary fashion. He is a family man through and through, making time for his wife Anna and their teenage daughter Marina and grown-up son Marc, who has recently decided to become a chef. Each day, Roca takes his daughter to school and then cycles around Girona to clear his head before starting the day’s work.

“We live right above the kitchen so my kids have always been close to everything that’s happened in these wonderful years at the top of the 50 Best list,” says Roca. “They’ve lived it intensely with us. I thought that might scare them but no, on the contrary, it has brought them closer and it’s shown them there is an interesting world available to them, regardless of lists and acknowledgements.”

These family values no doubt come from his parents, who still run the Can Roca tavern just up the road from the restaurant. The Rocas’ mother, Montserrat Fontané, still cooks the staff meal at Can Roca every single day, and her spirit of hospitality and leadership has filtered through to eldest son Joan, though he may be too modest to admit it.

“They say I’m the leader, but it’s not really true because we agree on everything together,” says Roca. “We talk a lot before we make decisions and I think this is key to our relationship and the fact that it has lasted so long.”

Ask brothers Josep and Jordi though, and they will beg to differ – it’s clear they see Joan as the glue that holds everything together, and also a key influence in drawing both younger brothers to the family business. "He’s the architect of our world, accomplice in my creative chaos,” says Jordi. 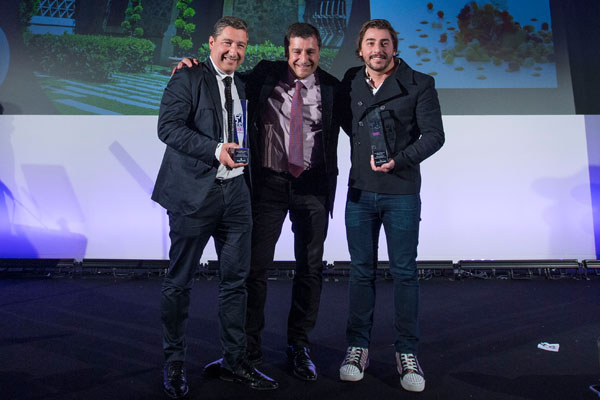 From left: Joan, Josep and Jordi in 2015 after El Celler de Can Roca was announced as No.1 in The World's 50 Best Restaurants

"Joan Roca is a major reference for me, for his profound knowledge and for his kindness,” says Rizzo, who runs the kitchen at Maní. “It was at El Celler de Can Roca, after eating there with friends, that I understood that food could be an artistic expression, not just mechanical or monotonous work. After insisting for many years, I got a ‘yes’ from Joan Roca to do a stage at El Celler. It was one of the happiest days of my life."

Many of the cooks who learned from Roca are now putting their own stamp on some of his trademark techniques. Roca’s cuisine is unique and avant-garde. Focusing on mood and emotions, he incorporates cutting-edge techniques to create highly stylised dishes that are designed to evoke memories, emotions and the landscape of the Catalunya region.

With a focus on the rich and abundant seafood in the area, Roca’s extensive tasting menu includes established favourites such as prawn marinated with rice vinegar – head juice, crispy prawn leg and seaweed velouté – and cuttlefish with sake lees and black rice sauce. Unmistakably Roca-esque courses include “Growing up in a bar,” where a cardboard pop-up of the Can Roca tavern is presented to diners with paper figurines of the three brothers and snacks representing their childhood memories; and “The World,” where an elaborate globe is set down on the table with branches for different snacks from various legs of their travels.

A degustation of up to 14 of Joan’s savoury courses and snack selections is accompanied by sommelier Josep’s unparalleled drinks pairings, which draw from one of the largest restaurant wine cellars in the world with over 60,000 bottles and homemade beverages such as vermouth from xarello grapes. The meal is completed by Jordi’s often startlingly inventive sweet creations, including “Old book,” a puffed pastry of butter cookies, cream of Darjeeling tea and old book essence. The combination of the three brothers’ work is undoubtedly the source of the winning formula. 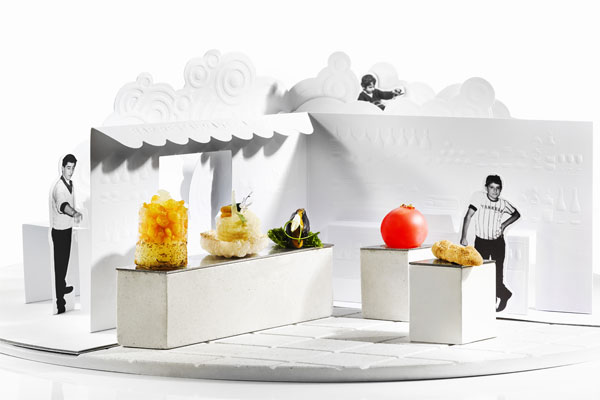 The "Growing up in a bar" course of snacks

Although almost all his career has been spent in Girona at his own family restaurant, Roca has also been influenced by some of the world’s greatest cooks. He completed his catering studies in 1983 and three years later he opened El Celler de Can Roca with his brother Josep, when youngest sibling Jordi was just eight years old. Although he ran the restaurant with little outside training, he learnt from avant-garde Spanish cook Santi Santamaria in 1988 and the following year he spent a season with Ferran Adrià at El Bulli, later to become The World’s Best Restaurant a record five times.

In 1991, Joan and Josep were influenced by renowned French chef Jacques Pic and his Restaurant Pic in the Ardeche region of France, which they credit for a decision to dedicate their lives to haute cuisine. The following year, Joan worked with Georges Blanc in Vonnas, France, where he discovered sous vide techniques and began to experiment with temperature control and cooking duration. He brought these learnings back with him to Girona and by 1995 had earned the restaurant’s first Michelin star, with a second following in 2002, just a few years after the young Jordi came on board as pastry chef.

Having found their calling for cooking, wine and desserts, the trio went on to write several recipe books together, gradually gaining a reputation as world-class cooks and restaurateurs. Although they moved El Celler de Can Roca to larger premises in 2007, they have always rejected the idea of international expansion, preferring to retain El Celler’s identity as a family restaurant with all three siblings frequently present.

While they may be primarily focused on just one establishment, the Rocas are no strangers to new projects, with Jordi’s Rocambolesc first ice cream parlour opening in Girona in 2012 and a chocolate factory slated for next year. In 2014, they embarked on a BBVA-sponsored series of world tours, which would see them closing the restaurant for a period over the summer for three consecutive years to travel with their entire team to countries including Colombia, the US and Turkey. During the trips, Roca and his brothers helped promote small producers and elevate talented young chefs, while bringing back ideas and inspiration for new dishes with international flavours.

“We've cooked in 18 cities in the last three years,” Roca said during his #50BestTalks speech as part of The World’s 50 Best Restaurants’s 15th Anniversary celebrations in June. “Our cooking has totally, irreversibly changed since we did that. The techniques and knowledge that we have managed to garner from other places have really been extraordinary for us. We're still working and researching various fields and projects.”

Their reputation established as conscientious, community-focused cooks, in 2016 the brothers were appointed Goodwill Ambassadors by the United Nations Development Programme. They are now working on a project in Kaduna, Nigeria, to create a pilot centre for food and agriculture education to be replicated across Africa.

It’s a role and a responsibility that is clearly suited to Roca, a man who is well known not just for his culinary talent but also for his ability to nurture those around him and to emanate an infectious happiness. This matches perfectly with the chef’s desire to use his influence as one of the world’s premier cooks to create a more sustainable industry.

“We hope to be able to use science to create awareness of ecology and sustainability,” he says. “Because the more sustainable we are, the healthier we are. The more human we are, the better. Because to cook is to care.”


Now watch Joan Roca's speech on why cooking is caring at #50BestTalks in Barcelona:

Over the next few weeks, we will be publishing articles on all seven of the chef-owners of the past and present No.1s in The World's 50 Best Restaurants as part of our Best and Beyond series, presented by Miele. Stay tuned to our Facebook, Instagram and Twitter channels for alerts and subscribe to our YouTube channel for all the videos.