After entering the Asia’s 50 Best Restaurants list at No.40 in 2018, Belon in Hong Kong has risen 25 spots to No.15 on this year’s list, winning the Highest Climber Award. Executive chef Daniel Calvert gives us the secrets behind his key signature creations.

“The food we serve at Belon is very simple, familiar flavour profiles, but executed to the highest degree,” says Daniel Calvert, executive chef of Hong Kong’s Asian-accented French bistro. While the menu may read as what you could describe as ‘safe’ – oyster tartare, an ode to salade niçoise made with shima aji, and a whole roasted chicken – there’s good reason the cosy, 36-seat boîte has jumped from No.40 to No.15 on this year’s Asia’s 50 Best Restaurants list.

For Calvert, the 31-year-old chef who spent two years working at the stand-out Epicure at Le Bristol in Paris prior to his move to Hong Kong, it’s all in the detail. “On the surface, everything can look very basic and nondescript, but we consider every detail,” says Calvert, referring to the restaurant’s use of super-high-quality Le Beurre Bordier as the standard kitchen butter, making all puff pastry in-house, and fermenting red miso-laced sourdough for 36 hours. “These elements go unnoticed by many, except for the people who truly understand.” 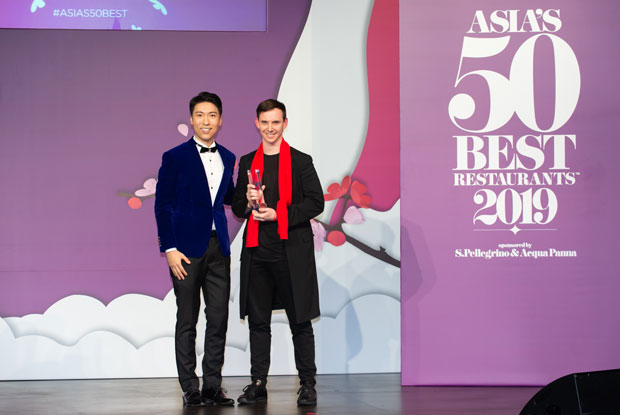 Since Calvert assumed control of Belon’s kitchen, the restaurant has had a stream of accolades. It earned one Michelin star,  landed on Asia’s 50 Best Restaurants list for the first time in 2018, and this year it has won the Highest Climber Award, jumping an impressive 25 places.

The plates he creates are made with stand-out ingredients cooked with flawless French technique and there is an approachability to Calvert’s cooking that appeals to travelling diners and locals alike. “At Belon we have a lot of regulars, some of whom come once or twice a week, so it’s important to keep things moving,” he explains, describing his menu, which changes every few days.

Below, the chef outlines four of his signature dishes and their genesis: 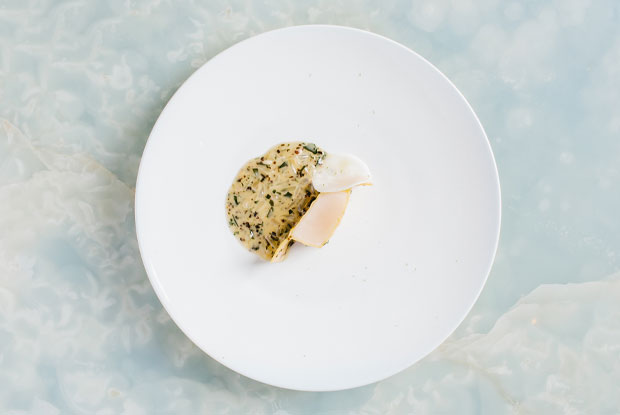 “This scallop dish was inspired by a meal I had at Flower Drum, a legendary Cantonese restaurant in Melbourne. The first course I had there was a whole scallop inside a dumpling. In Belon’s European kitchen, I swapped the dumpling skin for pasta, while adding a regionally influenced sauce with pomelo segments, shio kombu, and seaweed. I source scallops from Hokkaido, as I find the texture of Japanese scallops from this area to be more toothsome.

“I love how the scallop cooks inside the ravioli and the dashi, sake, and seaweed butter sauce really works. We use not only supremely high-quality Bordier butter for the sauce, but also a blend of seaweeds: namanori, tosaka, and shio kombu. Each one adds unique flavour and texture that help to round out the sauce. Namanori, in particular, has a super fresh and briny flavor, while tosaka has a wonderful bite. This dish has a lot going on, but when the balance is right, it’s truly one of the best on the menu.” 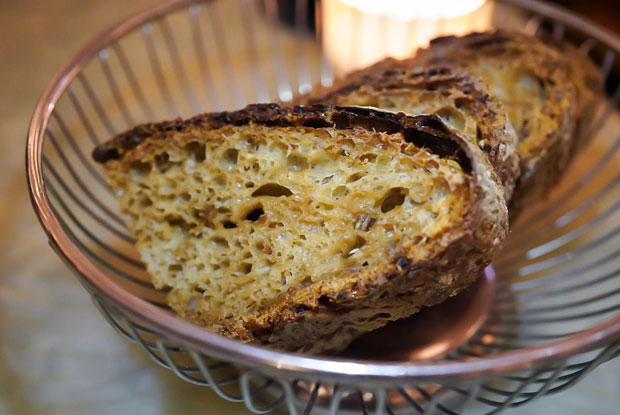 “When you sit down at Belon, I like to call the welcome a statement of intent. We start the meal with 36-month-aged Comté cheese gougères, and our bread and butter. It’s a red miso sourdough paired with grassy, high-acid, yet unbelievably light on the palate Le Ponclet butter from Brittany, France. Our original bread recipe came from James [Henry] when Belon opened, but I’ve changed and tweaked it over the last few years. My friend Pamela Yung [of Tartine in San Francisco and the now-shuttered Semilla in New York] also came by to give me some tips along the way.

“We are now up to a slow 36-hour ferment. The part I truly love about our bread is the contrast between the crust and the high hydration level of the flesh. We are around 87% hydration at the moment, and depending on the humidity levels in Hong Kong, we have to cut it back to 85%. We add coarsely ground barley porridge and red miso for dimension of flavour. Guests love the bread, and we are starting to supply other restaurants in Hong Kong, but we can really only make 16 loaves a day.” 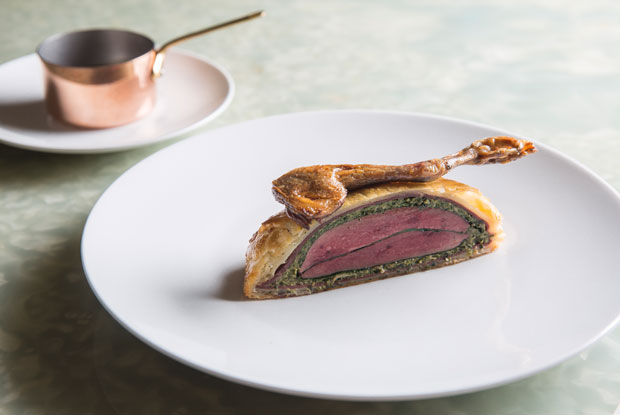 “This dish came from a desire to do things the Belon way – very simple, well-executed dishes that are instantly recognisable. Serving only what is important: the perfectly cooked bird, a wonderful sauce flavoured with fig jam and Amaretto, and the pastry, which brings everything together. The tweaking and bettering of the pithivier comes from looking at and analysing every component every single day. Starting from the homemade pastry, moving to only using pigeons that weigh 550g because that’s the perfect cook ratio. We finish the accompanying sauce with a fig leaf to really accentuate the fig jam’s flavour. All these slight changes come with time, and they are key to everything we do.” 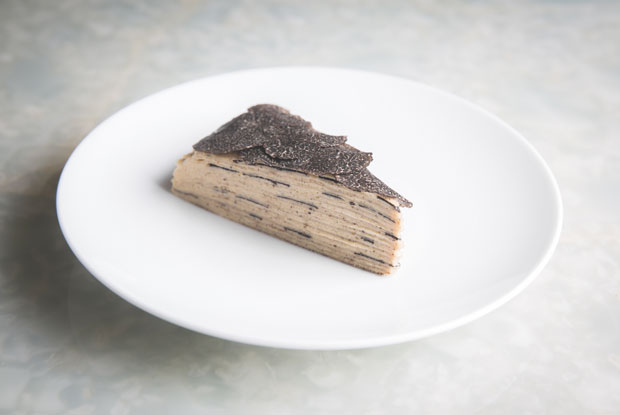 “This dessert blends a perfect match of hazelnut and truffle. The hazelnut purée and flour we use is from a small producer in Piedmont, Italy. For me, I question which is more luxurious, the rare local hazelnut, or the famously scarce truffle. Mille crêpe was founded upon the idea of taking two ingredients from the same terroir and putting them. Due to the small yield of hazelnuts from our producer, this dessert plays with the idea of which ingredient is more luxurious – the truffle or the hazelnut?”