As Jaan in Singapore today becomes Jaan by Kirk Westaway, we speak to the English cook about why he chooses to champion British cuisine in Asia and the struggles he has faced in doing so

Across Asia, restaurants celebrating European cuisines – such as French and Italian – have historically been very popular. From Joel Robuchon’s outposts in Hong Kong, Shanghai, Tokyo, Taipei and Macao, to the numerous Italian restaurants featured on the Asia’s 50 Best Restaurants list, including 8 ½ Otto e Mezzo Bombana in Hong Kong and Il Ristorante Luca Fantin in Tokyo, these cuisines enjoy a strong following in the region. British cuisine, on the other hand, hasn’t yet received the same acclaim – but chef Kirk Westaway is determined to change that.

The British cook, who grew up in Devon in southwest England, joined Jaan seven years ago, rising to the position of Executive Chef in 2015. At this time, Jaan – a restaurant set on the 70th floor of Swissôtel The Stamford with panoramic views of Singapore – had been serving French cuisine for almost 15 years. But since he took over the kitchen, Westaway has been infusing the menus with an increasingly British identity.

“For a long time, I felt embarrassed to say that we did 'European cuisine',” says Westaway. “What even is that? Now, I feel proud and happy to say that we are reinventing British cuisine. Ever since I started, this is the direction I wanted to go in. This is what I know and what feels true to me, I can’t reinvent French or Italian cuisine because I don’t know what that is like.” 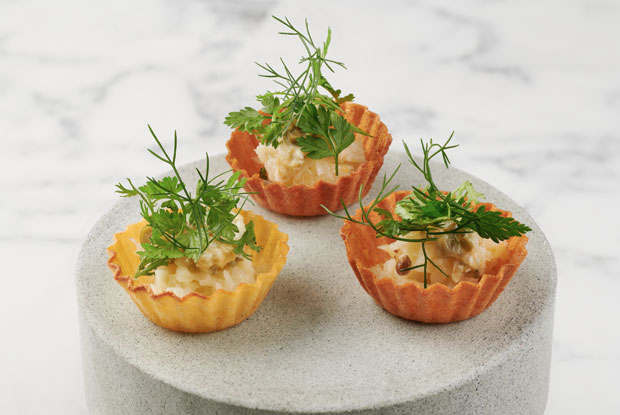 The chef admits that winning the support necessary to carry out his vision of contemporary British cuisine in Singapore wasn’t easy. “Initially, British cuisine was frowned upon, because people don’t really know it, or they think it’s just fish and chips or bangers and mash. But I wanted to create a version of the food that I grew up eating. After a couple of years, they let me give it a try. We started introducing more British elements in the menu, until in July 2018, that became our concept,” he says.

And the move, although bold, has proved successful. From No.44 in 2018, Jaan rose to No.32 on the Asia’s 50 Best Restaurants list in 2019, and Westaway won the Male Chef of the Year award at Singapore’s World Gourmet Summit in April 2019, where his restaurant also received the award for Restaurant Design of the Year for changes spearheaded by the chef himself. Now, the restaurant celebrates the indelible mark left by the chef by putting his name on the door, as Jaan is officially renamed Jaan by Kirk Westaway.

In rethinking Jaan’s menu, Westaway went back to his childhood memories to find inspiration for dishes that have become his new signatures in the ‘Reinventing British’ menu. “I grew up a vegetarian, as my mother and sister were vegetarian. I have these memories of my sisters and I going around our house’s garden and picking vegetables and herbs for a salad, and we would eat that in the garden with my family. English Garden is based on those memories,” he says.

An elaborate salad featuring more than 30 vegetables that change seasonally, English Garden may feature leeks, onions, cauliflower, carrots and Brussels sprouts, tossed in a beetroot dressing and incorporating a touch of dashi – a broth made from kombu, an edible kelp – that Westaway imports from a small producer in Scotland. 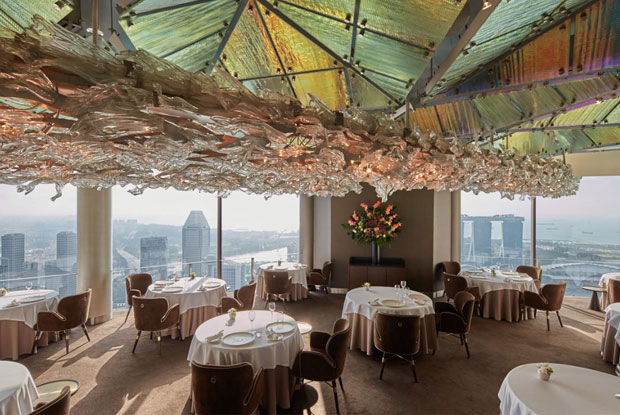 Inside Jaan by Kirk Westaway

“Sourcing from England is difficult, but the more I look, the more I find incredible produce,” says the chef. “France has a really good system where they know that their produce is wanted abroad and the export is really easy. It’s not like that in England. When I was looking to source Cheddar cheese, it took me a year to find someone who could do it.”

As well as cheese, the chef highlights that his home region of Devon produces many outstanding dairy products, such as clotted cream and butter. This provided the inspiration for another much-loved dish – the sourdough with Devon butter.

“When we had an afternoon snack, my grandmother would bring out this very posh butter dish with a stick of butter that we would have with bread. So we created a small butter stick that we serve with herbs that we grow here in the building, and top it with some Cornish salt.

“The sourdough is crunchy and aromatic. We serve it on hot stones that we keep warm in the oven, and they help the bread hold the heat. Between the stones and the bread is a hay that gives out this incredible aroma of the British countryside,” says the cook. 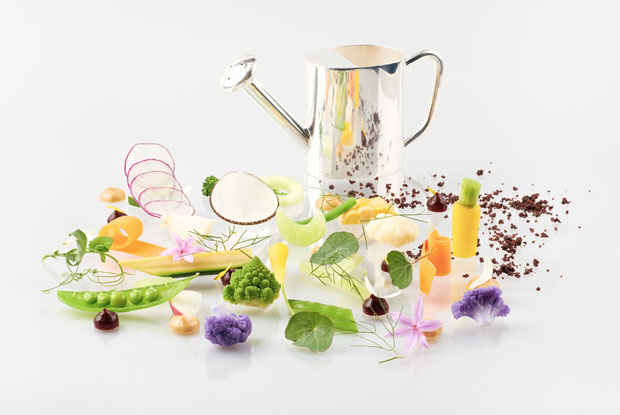 Westaway’s memories serve as the final ingredient for many of the dishes. A bite-sized tartlet version of fish and chips is a play on the chef’s recollections of sitting on Brighton pier – a popular British seaside destination – and enjoying fresh fish and chips from a carton with a dash of vinegar on top.

His signature ‘Egg in an egg’ is an egg-shaped container that, once opened, releases a heady aroma of rosemary – inspired by the memories of Westaway’s father burning rosemary branches on the barbecue. Pimm’s in the Park, a seasonal dish that is about to come back on the menu, features a cucumber sorbet and a Pimm’s-marinated pomelo served alongside a poem written by the chef about his memories of enjoying the traditionally English drink on summer afternoons.

The new Jaan by Kirk Westaway is set to continue on this mission to make British cuisine the next trend in Asia. With his drive and personality behind it, we have no doubt it will continue to gain credence and relevance across the continent.

Header images: Kirk Westaway and 'Egg in an egg'