Header: Saiko Izawa and her Romeo and Juliet dessert

Saiko Izawa, the newly crowned Latin America’s Best Pastry Chef 2017, sponsored by República del Cacao, has been breaking boundaries using savoury ingredients in her desserts at A Casa do Porco in São Paulo. Now she dreams of opening her own place to showcase her award-winning creations.

A Casa do Porco, the casual downtown São Paulo restaurant that opened in 2015 with queues around the block, is one of Brazil’s most successful launches of recent times, but it’s not just chef-owner Jefferson Rueda’s carnivorous creations that are causing a stir. Alongside Rueda in the kitchen is the talented Japanese-Brazilian pastry chef Saiko Izawa, whose desserts contribute significantly to the restaurant’s success.

Born in Tokyo and classically trained at Le Cordon Bleu in Paris, Izawa moved to Brazil as a teenager and fell in love with baking and the pastry arts. After working at El Celler de Can Roca in Girona and D.O.M. in São Paulo, she worked with Rueda at Pomodori and then Attimo, striking up a fruitful partnership.

Rueda and Izawa both left Attimo and joined forces for the opening of A Casa do Porco in 2015, and the rest is history – the restaurant won Highest New Entry to Latin America’s 50 Best Restaurants at No.24 in 2016 and this year rose to No.8, and now Izawa wins Latin America’s Best Pastry Chef Award. Here, she talks us through her dishes. 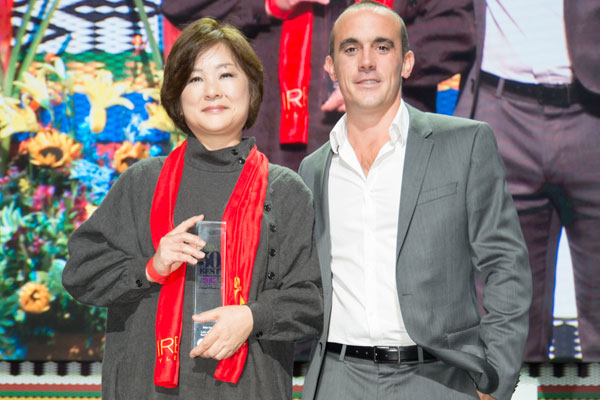 How do you go about creating your desserts?

Jefferson and I discuss his ideas for the menu or new dishes, and he gives me total freedom to create my desserts according to the selected theme and style. In our “Butcher’s” tasting menu, the dishes were created using various cuts of beef and I created a “Dairy Variety” dessert using cow’s milk in various forms.

Does the creative process start with a product or an idea?

There are no rules! Sometimes I am inspired by an artisan ceramic plate; other times by an ingredient. For example, Jefferson asked me to create a dessert inspired by the idea of salad. So I invented a strawberry-celery dessert with meringue and a basil sauce as dressing, playing with the classic combination of strawberries and meringue. My working style is a fusion of cultures, and not just between Japan and Brazil. I look for balance and try to find interesting and delicious combinations. Instead of matcha tea, I use mate tea to get delicate bitter notes in a particular dessert. I even use condensed milk occasionally. In our kitchen, there are no limits when creating a new dessert. 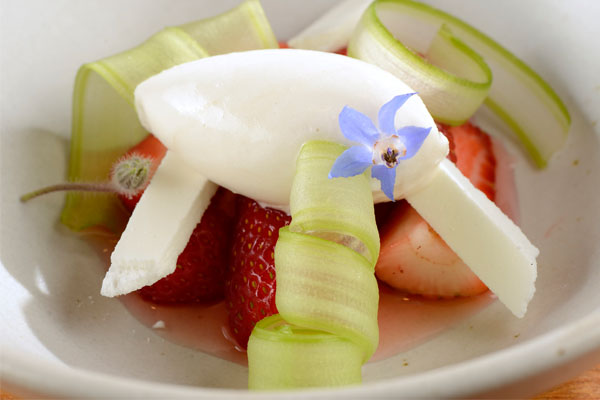 How would you describe your overall approach to dessert?

In my opinion, desserts must be light and not too sweet in order to achieve satisfaction at the end of a meal. It is important to research and experiment beyond the obvious. Some ingredients are nowadays not associated with desserts but they were once part of our culinary history. An example is my bone marrow and caramel cream dessert. We recreated the process of gelatine production to make bone marrow jelly and also caramel cream dulce de leche with bone marrow broth.

And your signature style?

The use of all flavours, including, for example, bitterness. I also like to put one element on the plate without sugar. I make it light yet complex in flavour. 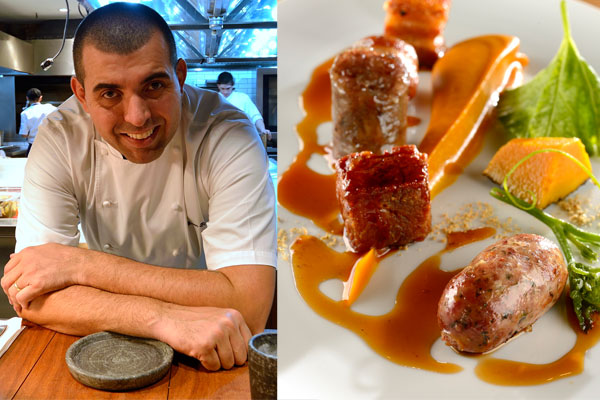 
Are you Brazilian or Japanese at heart?

I am mother of two Brazilian children and I have lived longer in Brazil than in Japan. But my Japanese side speaks louder in matters related to respect, preservation and discipline.

How do you juggle restaurant life with family life?

It is very difficult for a woman to have children and to manage a career in the kitchen. I was lucky enough to work at home while my children were small. My career in professional kitchens started later, so I had a lot of experience with my own business, and was a happy mother, which helped me a lot.

What is your dream?

To have my own dessert bar one day!