Meet the chef behind Lido 84, a restaurant you’re about to start hearing a lot more about

As Lido 84 in Gardone Riviera, Italy, receives the Miele One To Watch Award 2019, we speak to chef Riccardo Camanini about what makes his restaurant a blend of fantastic food and philosophical cookery

Nestled in a village home to only 2,500 people on the shores of Lake Garda, Lido 84 is the unlikely restaurant that has been garnering worldwide attention. Here, a team of 24 led by brothers Riccardo and Giancarlo Camanini runs an operation that sees the highest-quality ingredients from Lake Garda and beyond transformed into pieces of gastronomic art.

This is the Camanini brothers’ first venture, with Riccardo leading the kitchen and Giancarlo overseeing the dining room, and in its short history (it opened only in March 2014) it has seen seismic growth, culminating in the restaurant being recognised with the Miele One To Watch Award 2019, which highlights a restaurant considered a rising star in the world of global gastronomy. We speak to Chef Camanini to discover what Lido 84 is all about.

What was Lido 84 like when it opened in 2014 and how has it changed since then?

We started with four cooks, two waiters and Giancarlo and I. We had 80 wines and no sommeliers, the wine and water bottles would be on the table and the customers poured them; we couldn't do more than that. Now we are a team of 24.

The restaurant has improved a lot. We have refined the relationship with our suppliers and there is an incredible internal perception of this. Sometimes, pieces of fish or meat arrive at the restaurant that make people stop working to go and look at them, because they can't wait to cook them.

The customers have also changed a lot, we now have a customer who is much more stimulating and more attentive, and that creates a bond that pushes us to improve what we are doing. 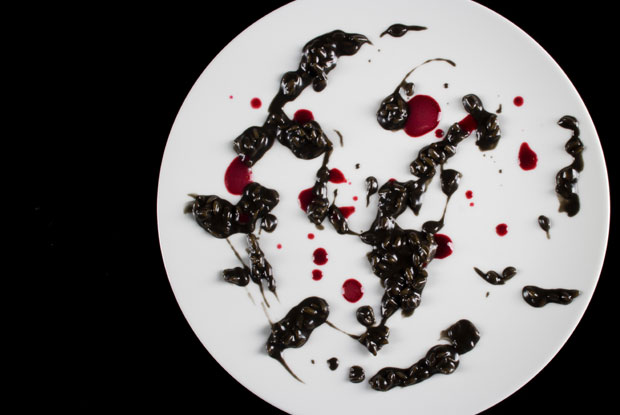 You have two tasting menus and one à la carte. What does each menu bring?

We have always had two tasting menus, one called ‘Classici’ (Classics) with six courses and one called ‘Oscillazioni’ (Fluctuations) that is the new seven-course.

The Classics menu tells an idea of gluttonous cooking, of pleasant cuisine. This doesn’t mean that the balance isn’t harmonious – it pays attention to the balance of harmonies even in its full and direct taste. This menu reflects the most delicious part of my approach to cooking. I like to cook it because every time I add a sauce or an ingredient to a dish, I imagine that I’m eating it. The Classics menu is inspired by this gluttonous aspect.


What do you mean by layering?

For example, we made a new line of appetizers that are vegetarian, without using any dairy products. The risk I generally see with this is that when you work only with vegetables, the result is a bit ‘on tiptoes’, the pleasant part is sometimes missing.

One of these appetizers is made with Roman sage leaves, which in this season are delicious. It is a coarse-leaved sage that Italian trattorias used to fry, and it is divine because it is not too persistent in the mouth and it is balanced in flavour. We fry this sage in a thin crunchy tempura, then we brush it lightly with honey, an acacia honey that has a light orange scent, then add two grains of coarse salt and a leaf of raw marigold.

Marigold is an herb that tastes a bit of mint and a bit of orange. The layering is the vegetable on the vegetable, or the meat on the meat, or the fish on the fish. I often do this, for example with sea fish and lake fish, or in this case with the fried sage leaf, which is extremely full of freshness. 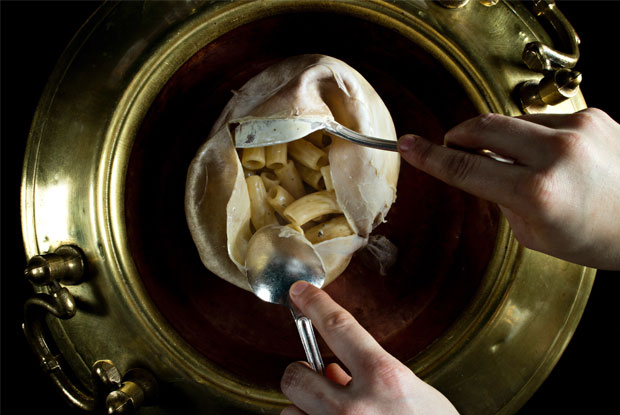 What makes your signature dish, a version of the Roman pasta recipe ‘cacio e pepe’ cooked in a pig’s bladder, unique?

The cacio e pepe en vessie is imperfect. It is blind cooking, all calculated in advance, because you can’t open the container. It lives on continuous micro transformations, because the pecorino cheese that arrives today might be different from the one that arrives tomorrow, the bladders are not always the same thickness, and so the cooking chamber is not like a steel pot that doesn’t change, therefore the rigatoni can’t all cook in the same way.

The inspiration for the dish comes from reading Apicius [a collection of Roman recipes compiled in the 1AD], where it’s written that pig bladders were used as containers to transport ingredients to the Roman colonies. We took what we learned from the French in this method of cooking and decided to apply it to a Roman recipe, because the writer, Marcus Gavius Apicius, was Roman.

Therefore, cacio e pepe en vessie lives on this imperfection. We always let the customer know that by choosing this dish, they are choosing to eat a poem or a story. It is a dish that absolutely does not aspire to the perfection of many other signature dishes by other chefs, because it is impossible.

What do you achieve through the unpredictability of the cacio e pepe en vessie?

It's a greater dialogue with the product. The cook who makes the cacio e pepe shakes the bladder during cooking to mix it, which creates an emulsion and allows the rigatoni to move. When the cook takes the bladder in their hands for the last time, they can feel with the sensitivity of their fingers what is inside the bladder. They can hear the rigatoni, from the noise they can hear the creaminess and the amount of liquid, and this helps them to understand to what degree of precision that bladder was cooked.

This is what today's gastronomy should be about; it should be about these experiences. We must not forget that in craftsmanship, you work with raw materials that always change, and this allows every cook to express themselves with greater tranquillity and less anxiety.

This gastronomic moment reminds me of a great artisan from whom I bought cheese until last year, who made only five or six cheeses for all his life. One day I said to him: 'Damn, this Bagòss cheese [a traditional mature cheese from Lombardy] is really good’. He told me: ‘Riccardo, I’ll explain it to you. When I move the Bagòss cheeses and turn them between the wooden shoulders, I grease them with linseed oil to help them mature, and through my hand I can understand if each cheese needs more or less oil, or if I need to open the window to air them or not’.

In the same way, with the bladder, the cook has this beautiful perception of pleasure through his hands. In the uncontrollable, that’s what you feel. It's much more human. This is one of the pleasures of our profession. 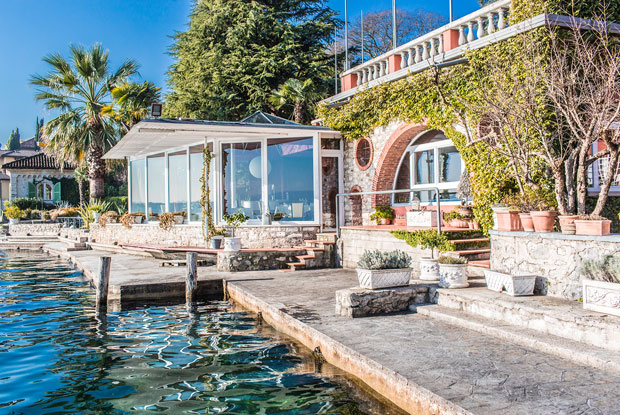 Lido 84's terrace on the water

You often talk about craftmanship. What is craft for you and how does it manifest itself at Lido 84?

Giancarlo and I are perceiving and feeling that we have a real ability at this time to feel every micro step and every small situation at the restaurant, because they all pass under our hands. This is the idea of craftmanship and small business for me.

It is a beautiful feeling that is linked to a very special memory from when I was a child. I was born in 1973, so I lived in Italy in the 70s and the 80s, when everything was still in that human dimension linked to the post-war period. In the small villages you could still play on the street, maybe there was a part of the village that was being re-built, and you lived in your little village with its artisanal shops.

So I asked myself: why do I have this beautiful memory of the artisanal shops, or botteghe, stuck in my head? Because it is a poetic part of Italy that made excellent products. Italy is recognised throughout the world because it has this small craft industry that makes the difference, that touches people's hearts. Since our profession is one of generosity and hospitality, I cannot ignore this. The power to touch the memory of people in our profession is something extremely pleasant and difficult to obtain.

Emphasising this aspect is an emotional feeling that Giancarlo and I are experiencing, it is the small atmosphere of a workshop where there is a connection between all people that is very strong, very alive, very lively and especially experienced by all.


How did you know that it was time to launch your own restaurant?

I felt the need to change, to do something different. There are passages, cycles of life where you need a renewal. I was curious to see what kind of cuisine I would do, because when you work for others, you have to account for what they want for their customers.

The need was simple and spontaneous, we got to an age where Giancarlo and I could afford to open a restaurant with our savings and the opportunity of buying Lido 84 presented itself. We liked the location, although the building needed a lot of work because it was little more than a grill restaurant open only in summer. 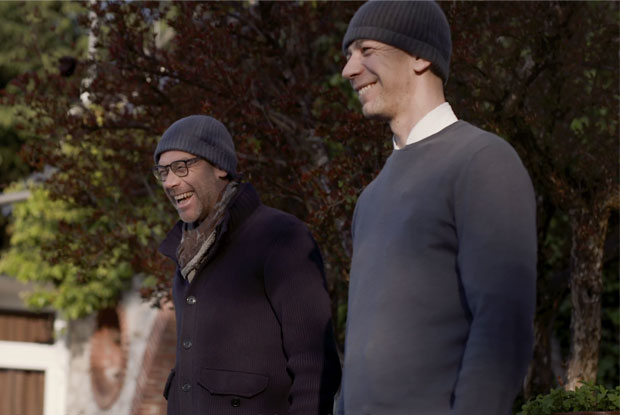 How's the relationship between you and Giancarlo?

Giancarlo and I have been friends for a long time, in the sense that we always hang out with the same people since we were kids, we were always together. He often went to restaurants with me, and we often said: 'One day, we’ll open a small village restaurant'. That was the idea, to open a small restaurant and finally have our own small business. There wasn't this perception of where it could go.

We have been lucky so far, because we realise how much friction there can be if the relationship isn’t solid, because the pressures within a company are so many. We trusted the relationship of mutual esteem that we have, and perhaps that’s what saved us so far because it is normal to have different views. We wanted to try something new together, to have a different life experience and to grow, but without thinking that we could get to where we are now and grow so fast.

How do you see Lido 84 changing in the coming years?

What we are feeling is that the restaurant is a place where you can develop an idea, and within the creativity and the idea of hospitality that we are carrying out, there are so many possibilities to diversify it. There is still a lot of potential because the place allows it, and at the same time, I think that we are still at the beginning of getting to know ourselves.

Riccardo and Giancarlo Camanini will officially receive the Miele One To Watch Award 2019 at The World’s 50 Best Restaurants 2019 awards ceremony on Tuesday, 25th June, at Marina Bay Sands in Singapore, when the new edition of the list will also be revealed.

Watch the live countdown of The World's 50 Best Restaurants, sponsored by S.Pellegrino & Acqua Panna, on the 50 Best Facebook page, and tune to Instagram and YouTube for more photos and videos.