Make the top dishes from #50BestTalks: Beyond Frontiers at home

In September, 50 Best organised its first official event in France with a special edition of its thought-leadership series in the capital. For #50BestTalks: Beyond Frontiers, presented by Miele, seven of Paris’s top chefs came together for a gastronomic extravaganza that defines the city’s food scene today. Here are our favourite recipes from the day that you can recreate

By Chiho Kanzaki and Marcelo Di Giacomo: Tomato, aubergine and Grana Padano crumble with criolla sauce
Kanzaki and Di Giacomo are the brains behind Virtus, one of Paris’s most forward-thinking restaurants. They met while working at The World’s Best Restaurant 2019, Mirazur, and much of their style is influenced by their time working with Mauro Colagreco. The dishes they create are full of aromatics, with a lightness of touch that creates beauty on the plate. Try this as a side dish with roast lamb or beef, or as a vegetarian main course on its own. 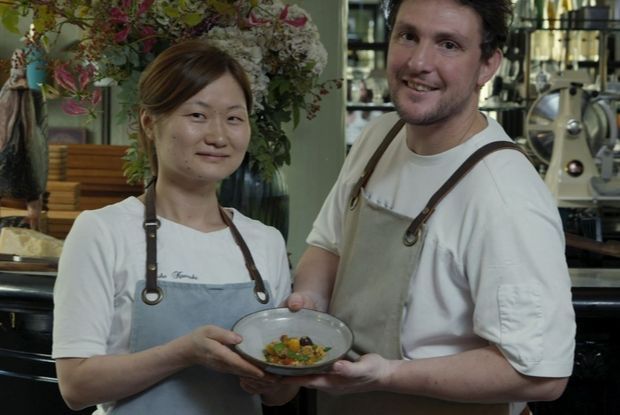 Method
1. Roughly chop two tomatoes and peel the aubergine, cutting into six pieces. Cook covered in foil in a 180C oven with garlic, salt and the herbs for 35 minutes. Once out of the oven, cover with half of the balsamic vinegar and paprika and allow to infuse until cold.
2. Deseed the aubergine, chop and mix with half of the shallot and olive oil.
3. For the criolla sauce, cook the peppers in the oven in the same way as the aubergine, covered with foil and with salt and herbs. Once cool, cut into brunoise.
4. Deseed three of the tomatoes and sieve, reserving the juice. Cut into brunoise of a similar size to the peppers. Combine all this with the reserved tomato juice, half of the shallots, half the balsamic, spring onions, salt and olive oil.
5. For the Grana Padano crumble, mix the cheese with the flour, butter, cream and salt and bake on a baking tray at 160C until golden (approx. eight minutes).
6. To finish, cut the remaining cherry tomatoes and place in the centre of the plate, topped with some of the aubergine mix. Drizzle on the criolla sauce and top with the crumble and some small basil shoots for garnish.


By Gregory Marchand: Fresh curd ricotta, Reine Claude plum, chive sabayon and Timut pepper
One of the early adopters of modern French cuisine, Marchand has restaurants in Paris and London. His style of food is fresh, light and modern, using local ingredients with clean technique, picked up from his time spent working all over Europe. This dish works perfectly as a starter at this time of year.

Method
1. Start by making the ricotta. Combine the milk and the cream, bring it to boil slowly, add the vinegar and the salt, allow the mix to split and simmer it for about 15-20 minutes. Once cool, strain it to separate the curd (fresh ricotta) from the whey.
2. For the sabayon, combine the egg yolk, lemon juice and salt, and whip it over a bain-marie (in a glass bowl over water on a rolling boil) until it reaches a smooth consistency. Add the chive oil drip by drip while whisking to allow it to emulsify gradually for an airy sabayon.
3. Cut all of the plums in half and remove the stone. Rub them in olive oil, sumac, zaatar and fleur de sel and bake in a 170C oven for 10 minutes.
4. To serve, place room temperature fresh ricotta into bowls and top with some of the plum mixture. Cover with the chive sabayon and top with toasted buckwheat (optional).

By Yann Couvreur: Vacherin noisette with Mirabelles
With his pastry, Couvreur brings together traditional flavours with modern design. After successfully launching patisseries in Paris, he opened last month in London. For #50BestTalks he put together three sweet treats, but the most popular was this excellent dessert. He learnt his craft with Stephanie Le Quellec and her restaurant La Scène restaurant in Hotel Prince de Galles and first ran a pastry section at Eden Rock hotel on the Caribbean island of St Barts.

Method
To make the plum jelly, heat the plum pulp with the honey to 40C (measure using a food thermometer), then begin to add the agar agar gradually and cook at 90C. Mix once completely cooled until you reach a smooth, shiny texture.
2. For the meringue beat the egg whites and sugar together. Add sieved icing sugar with the potato starch and mix with a spatula, folding it together. Form domes of different sizes and bake for 10min at 120C.
3. For the Chantilly cream, Whip the cream with the vanilla and put it in a piping bag fitted with a star tip.
4. To bring it together, in the bottom of the cup put a spoonful of fresh Mirabelle plums, then add a spoon of plum jelly. Place three small swirls of whipped cream and some mini meringues and top with quality hazelnut ice cream.

Now watch the highlights from #50BestTalks: Beyond Frontiers in Paris: