Meet the mother and son behind Nicos, home of the world’s most beloved Mexican cooking

The season of Latin America’s 50 Best Restaurants 2018 officially starts today with the announcement of María Elena Lugo Zermeño and Gerardo Vázquez Lugo of iconic restaurant Nicos in Mexico City as the joint winners of The Diners Club® Lifetime Achievement Award.

The mother and son duo are widely considered as the global ambassadors of traditional Mexican home cooking. Here, they talk about Nicos’ 61-year history, how Mexican cuisine took a global foothold and the importance of preserving culinary traditions.

When María Elena Lugo Zermeño and then-boyfriend Raymundo Vázquez opened a café in an industrial neighbourhood of northern Mexico City in 1957, little could they imagine the impact that Nicos would have on the capital’s restaurant scene some decades later. In fact, they didn’t even serve meals at the time; the café’s main attraction was a traditional coffee machine from renowned Italian brand La Pavoni.

The local factory workers became Nicos’ first regulars, visiting during their break for good coffee and a chat with Raymundo. Neither María Elena nor her soon-to-be husband had any hospitality experience – she had just left a career as an executive secretary, while he came from a family of marble workers. But one lunch break after another, the patrons started noticing the meals that María Elena prepared for the staff, traditional Mexican dishes made from her family’s recipes.

“They started saying: ‘We would like some of that,” says María Elena. “I would say: ‘but it’s just staff food!’ But they wanted it, so we started serving it. First it was four guests, then six, then eight; within a year and a half, we were serving 85 covers every day.”

The humble beginnings of Nicos – now a restaurant that attracts national and international gastronomes longing for a taste of real Mexico and voted into the Latin America’s 50 Best Restaurants list every year since 2015 – says something about its owners and their dedication to ensuring a future for authentic Mexican home cooking.

“With Raymundo, it was the phase of sowing seeds, putting down roots and growing,” says María Elena. “We started from nothing. We fought to earn a living, to start a business that could support a family. Raymundo was a visionary and an entrepreneur. He shone a light on the future with hard work, creativity and a spirit of constant improvement. I’m sure he’s applauding us from above, now.”

After almost 40 years with María Elena in the kitchen and Raymundo in the dining room, the couple’s fourth child, Gerardo Vázquez Lugo, joined Nicos as head chef in 1996, changing career after a promising start as an architect to follow the family dream of preserving traditional Mexican recipes.

Look inside restaurant Nicos with chefs María Elena and Gerardo:

When Nicos was first voted into the Latin America's 50 Best Restaurants list in 2015, it was a poignant moment for María Elena and Gerardo. The pair attended the awards ceremony in Mexico City without Raymundo, who passed away only weeks before the family collected the first award for the restaurant.

Since then, the mother and son duo have persevered in their mission to make Nicos a reference in Mexican gastronomy, and will collect their Diners Club® Lifetime Achievement Award for Latin America’s 50 Best Restaurants 2018 on Tuesday 30th October in Bogotá, Colombia, for their family’s shared accomplishments for Mexican cuisine on a global level.

Gerardo grew up inside restaurant Nicos, where his mother would mash small portions of the dishes into baby food to feed him – it goes to show how homely Nicos’ cuisine is. Gerardo comments that Nicos was his parents’ ‘first child’ before they were married, and María Elena says that her children are all ‘100% Nicos products’. The family feeling is strong, not only in the recipes, but also within the close-knit team led by mother and son.

What constitutes ‘Mexican home cooking’, however, can be difficult to define. “Everyone has a different reference of what was made in their home, but [Nicos] is based on family cuisine and how we eat at home in Mexico City, without trying to imitate it, but respecting the origin of this seasonal and unpretentious cuisine,” says Gerardo. The head chef has researched the topic at length, investigating old recipe books, discovering traditions and techniques from across the whole country and formalising recipes previously only passed down within local families. 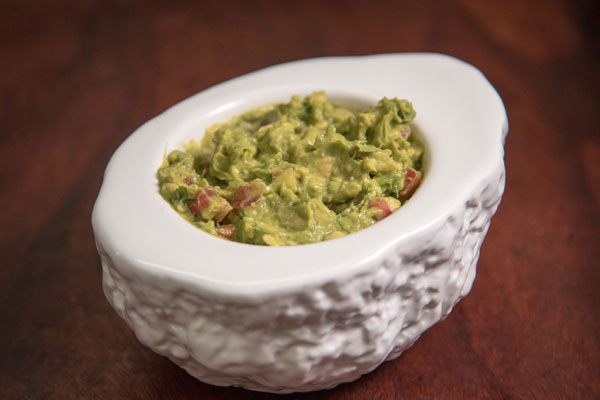 “When I joined Nicos [in 1996], I tried to understand the context of what it is, which is a neighbourhood restaurant,” he says. “I learnt to see it from a different perspective, looking at my memories. Memories of my parents discussing an artisanal cheese they brought back from a certain region, or talking about the seasons and the produce of Mexico, like the rainy season with its mushrooms and herbs.”

“Memories of when, as a kid, we were driving on a day of holiday and we stopped at a milpa [a cropping field of Mayan origin] and we ate the squash, corn on the cobs and chayote squash sold by the owner. I tried to bring those memories back, that style of home cooking that also takes in the foreign influences and the products that were adopted into Mexico City’s cuisine, which is what makes it unique,” says Gerardo. “Women have been preserving traditional Mexican cuisine for centuries. That this award now goes to a restaurant that has been trying to respect that tradition is a big honour for them.”

Under the catchphrase mesa chilanga, representing all the various cuisines and influences that live side by side in Mexico City, Nicos’ cuisine incorporates elements of the history and culture of the country through the centuries. A meal may start with traditional guacamole prepared at the table according to Nicos’ own recipe, followed by one of the traditional soups – made with fresh market vegetables from Mexico City’s market, with wild herbs and cactus, or the classic sopa seca de natas. 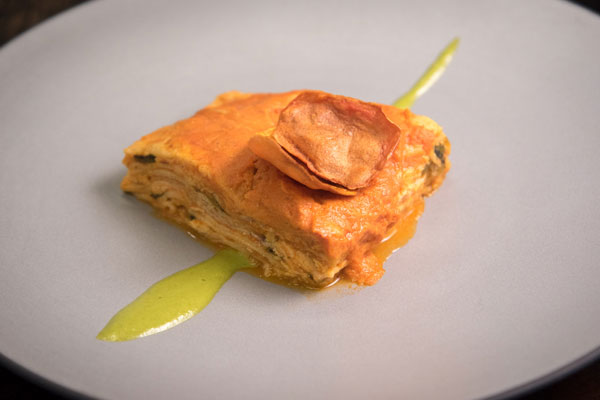 Gerardo’s recipe for sopa seca de natas is characterised by elements of French influence. The dish was conceived by the nuns of the Convent of the Capuchins in Guadalajara in the 19th century, after a brief intervention in the city by French troops between 1864 and 1866, and consists of layers of crepes and shredded chicken in a creamy and spicy tomato sauce made with chile poblano. The fact that this traditional recipe still exists today is largely thanks to Gerardo’s recovery efforts.

The main part of the meal may include fresh fish or meat, served in traditional preparations such as enchiladas or enmoladas, with tortillas made from heirloom corn varieties and plenty of seasonal products.

María Elena and Gerardo often had to formalise traditional recipes that had previously only been passed on orally or through example from mother to daughter. “Since I was young, I loved cooking,” says María Elena. “At home you sow the seed of the taste for cooking and that’s very important. I saw my mother, my grandmother and my aunty preparing delicious things, and I wanted to learn how to make them, because that’s what we do every day – we eat and we feed ourselves.”

There was, however, a striking difference between the two generations. “With María Elena, everything was grams and measures, and with my grandmother, it was all handfuls and pinches,” says Gerardo. María Elena would watch her mother cooking and secretly run to another room to measure the quantities she saw – she says that she soon worked out that her fist held exactly 20 grams of coarse salt – but through her unrelenting work, she made her mother’s recipes possible to replicate by all the chefs at Nicos. 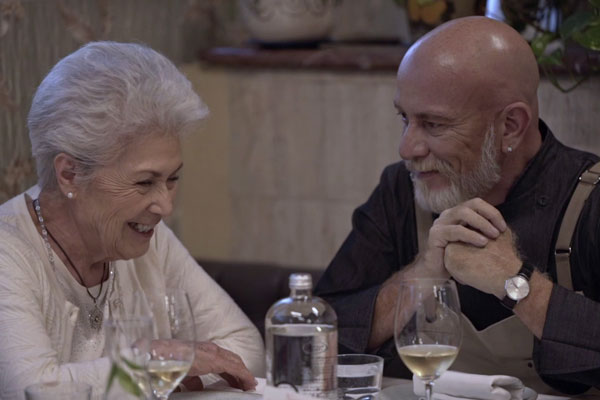 María Elena and Gerardo at Nicos

Working together for more than 20 years, María Elena and Gerardo have developed an unmistakable complicity. “She’s the boss,” says Gerardo. At the restaurant, he is the head chef, while she is the restaurant director and oversees all of Nicos’ gastronomic output. “We respect each other professionally, independently of our family relationship. She gives me all the freedom I want, within a certain standard of quality and cost.”

Over the 61 years that the restaurant has been open, Colonia Clavería – the area in which Nicos has always been located – has changed dramatically. The factories have moved further out of Mexico City, while new houses, residential buildings and universities have moved in. María Elena says that when Nicos opened, ‘there wasn’t even a single quesadilla stand’, while now the neighbourhood is full of small places to eat and drink, though it is somewhat out of the way of the main touristic routes.

Within all this movement, Nicos has stayed fixed, instrumental in the transformation of Mexican gastronomy from a virtually unknown tradition to a globally celebrated gastronomic movement, through María Elena and Gerardo’s work of recovery, preservation and promotion of family recipes. It all started with hungry factory workers – and it’s mission accomplished, judging by the many different nationalities and languages now spoken by Nicos’ guests and the long waiting list to try the Lugos’ inimitable family food.

“When my parents used to go out for dinner with me as a kid, we went to elegant restaurants that made French, Italian or Japanese cuisine, while Mexican cuisine was seen as something homely, we didn’t see its value,” says Gerardo. “Now, Mexican cuisine has been part of what made Mexico City a destination. There is a gastronomic tourism that comes here to know real Mexican cuisine, not adapted to foreign palates.”

Despite the global growth of Mexican cuisine, María Elena says that receiving The Diners Club® Lifetime Achievement Award was completely unexpected. “I thought that no one knew, that no one noticed Nicos. But maybe the problem was that I wasn’t seeing it, that it was so everyday for me that I didn’t think it was relevant. But others did notice our work. So thank you, thank you, thank you.”