Worshipping at the altar of progress: meet the Brazilian chef marrying gastronomy with spirituality

In Recife, northeast Brazil, Altar, Cozinha Ancestral offers homage to the culture, cuisine and community of Candomblé, an Afro-Brazilian religion. In November 2020, it was recognised as part of El Espíritu de América Latina, an initiative celebrating restaurants that embody the spirit of the region as part of Latin America’s 50 Best Restaurants 2020. 50 Best talks to chef Carmem Virginia Barbosa dos Santos about spirituality, food as a symbol of freedom and why she’s speaking out against racism, homophobia and religious intolerance

When Carmem Virginia Barbosa dos Santos lost her sense of taste last month due to the coronavirus, she feared she would have to give up her profession. Hospitalised for six days with symptoms, she began to think of solutions – if she couldn’t cook, she would teach people to cook, using her memory of how things taste. Though there were desperate times, she says her faith in the Candomblé religion helped her through.

“I was chosen as a child to be an iyabassê, cook of the orishas,” she says, referring to the gods of Candomblé, which blends West African and Catholic beliefs. “My orishas would never let me lose my taste and smell for good. If they put me on this world to be a cook, then I will be a cook.” Indeed she would: her sense of taste and smell have returned and she is now at home convalescing. 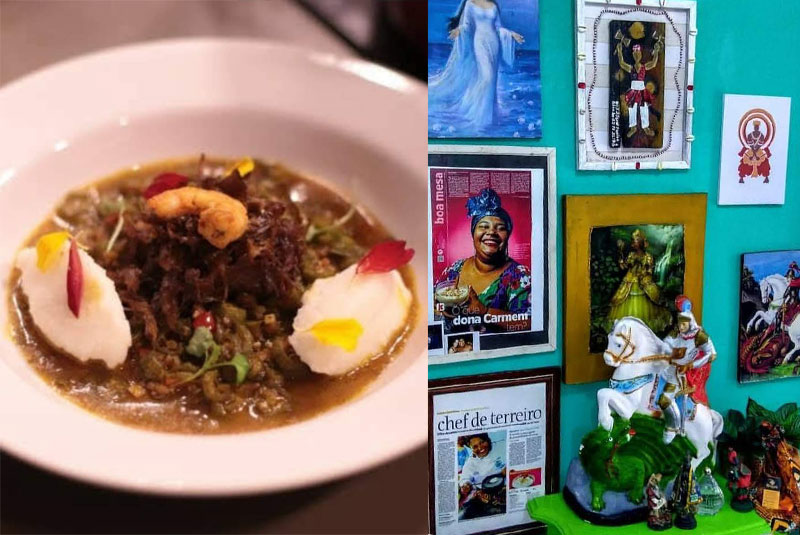 While Barbosa shares the same Nigerian Yoruba roots as Candomblé itself, she came upon the religion by chance. As a child, she was sometimes looked after by an elderly neighbour who belonged to a terreiro, the traditional temples where Candomblé rituals are practised. One day, when she was seven years old, she joined her neighbour at a religious ceremony and received communication that she had been ‘chosen’ to be a cook of the orishas, a sacred role within the religion.

It was another seven years before Barbosa learned to cook; even longer before she would open her restaurant. In the meantime, she sold everything from life insurance to lingerie, but was suffering from depression. One day, after cooking for friends at home, she began catering for parties at the temple. People started to praise her food, telling her she should make it professionally, and in May 2014, her restaurant in Recife – a city in the north-eastern Brazilian state of Pernambuco – was born. Altar, Cozinha Ancestral translates as ‘Altar, ancestral cuisine’ and is a shrine to the food of Barbosa’s ancestors, serving recipes passed down through oral tradition.

Acarajé as a symbol of freedom

Now a well-known television cooking show judge, Barbosa uses the spotlight not only to show off Afro-Brazilian dishes but also to explain their origins. The most emblematic is acarajé, a street-food fritter made from black-eyed peas and shrimp that originated in West Africa and serves as a religious offering to the gods in Candomblé. Traditionally made by women in the northeast of Brazil and particularly the state of Bahia, it was declared national cultural heritage and is central to both Afro-Brazilian culture and Candomblé. Barbosa explains that acarajé is symbolic because the women who made it would use their earnings to pay for their freedom from slavery until its abolition in 1888. 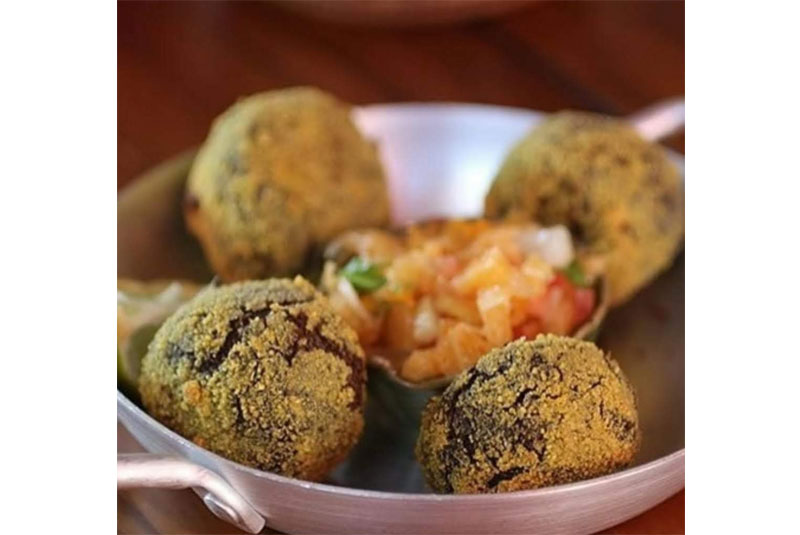 Barbosa's acarajé, inspired by a street food from north-eastern Brazil

“Many people don’t know what an orisha is, so my role above all is to educate and give credit to the orishas for their role in gastronomy,” she says. “It’s essential for people to understand that acarajé isn’t a dish that belongs to a particular state; it belongs to a people and comes from the orishas. I need people to understand our culture and cuisine and to have respect, acceptance and, above all, tolerance of what we do.”

Barbosa has suffered not only from religious intolerance but also from racism, fat-shaming and bullying. Now, she uses her popularity to speak up for those who are marginalised. A lover of the written word, she wanted to be a journalist, loving nothing more than the smell and feel of a newspaper in her hands. While she opted to follow the profession that chose her, she fulfils her love of writing through social media, posting several times daily on Instagram with long captions speaking out against racism, homophobia and religious intolerance.

She also makes a point of hiring people from diverse backgrounds, proudly putting trans women “on the front line” instead of “on society’s margins”, and inviting customers to leave when they exhibit prejudice against her staff. “I’m with the gay community, the fat community, the Black community and the people of the temple because those are the people that [some clients] don’t want to see,” she says. 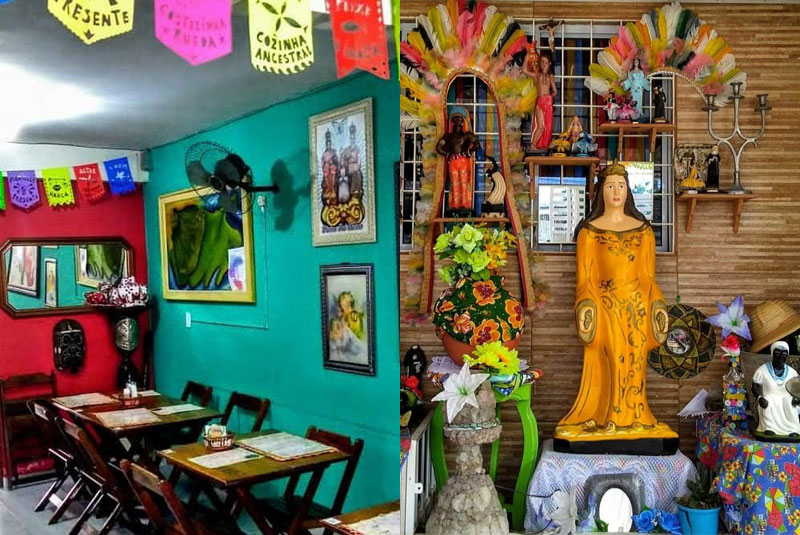 Altar, Cozinha Ancestral has become a symbol of equity and opportunity

A mission for inclusivity

Barbosa wants more black chefs to be recognised in Brazilian culture, but says that for that to happen, white people must understand the sacrifices their black peers have to make to achieve the same success.

“I am fighting not just for myself but for all the other black women,” she says. “We have to go much deeper than gastronomy, be more inclusive and empathetic. Most people have no idea what a woman has gone through; how many buses she takes to get to work; whether she suffers from domestic abuse; whether she has food at home. I have done events for famous chefs then fed my kids instant noodles because I didn’t have anything else.”

Despite her success, Barbosa’s business has suffered financially from the pandemic, closing for six months in 2020. But she is grateful Altar closed when it did. Two weeks into the pandemic, heavy rain caused the restaurant’s roof to collapse, a disaster that could have killed those inside it, including her mother and children, who live upstairs. Thankfully, the chef had already told her team to isolate at home, after a dream involving Iemanjá, the goddess of the sea. “She told me I needed to protect [people], so I knew I had to close the restaurant.” 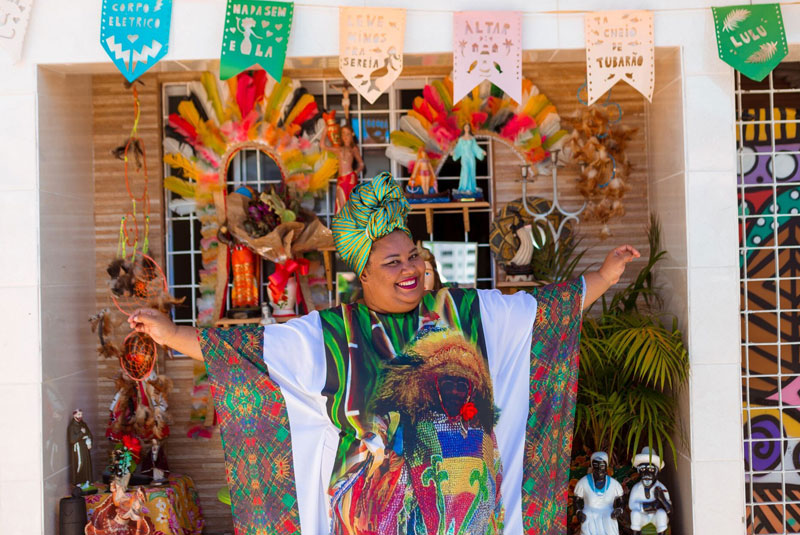 Altar has now reopened and Barbosa is cooking dishes from her home and helping out over the phone while she recovers from the virus. Looking forward, her greatest hope is for a more tolerant world that allows everyone to thrive, regardless of race, colour or creed. “People need to start practising what they preach. They need to get it into their heads that the world is divine and marvellous just the way it is, full of people who are different, places that are different and foods that are different.”