Meet the chefs behind KoreaNYC Dinners in New York

In June, New York will get a taste of authentic Korean food with three nights of fine dining at top local restaurants.

Get to know the five Korean chefs and two New York locals who'll be cooking at the extraordinary KoreaNYC Dinners, which is taking place in association with Seoul-based gourmet magazine La Main.

The restaurant: Part of the Artisan N Design group, which owns A&ND Coffee Lab, A&ND Dining is a speakeasy-style restaurant in the Hannam-dong district of Seoul.
Chef style: Chef Jang prefers not to define his cuisine, instead opting for the unexpected. He focuses on seasonal ingredients and uses as many different techniques as possible, with the aim of creating stories. So instead of providing menus, the chef offers four different ‘Episodes,’ featuring dishes like Carrot Croquette, Foie Gras and Uni, Apple Goat Sandwich and Chocolate with Pork Skin. Diners will even find Peruvian influence at A&ND, with plenty of ceviche on the menu.
KoreaNYC: Jang will be cooking with Hyun-Seok Choi and Carlo Mirarchi at Blanca in Brooklyn on Thursday 9th June for a special Korea-meets-USA dinner.
http://www.anddining.com/ 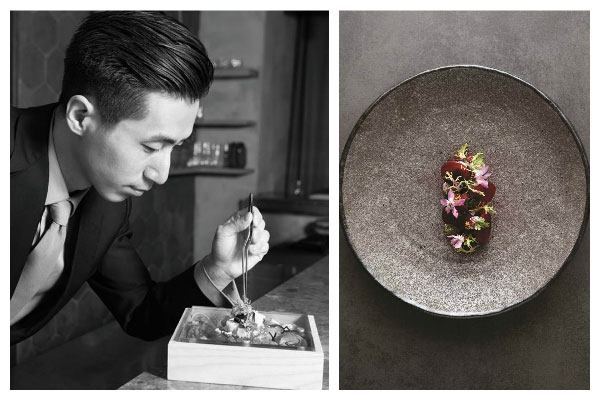 The restaurant: Part of a hip fashion, food and party concept store in downtown Seoul, Elbon The Table fuses Western and Korean cuisines into innovative dishes, such as xiaolongbao (steamed buns) stuffed with foie gras, and eel and kimchi risotto. The restaurant is located in a cool grey, box-like building with a sleek dining room and stripped back industrial-chic interior, open kitchen and roof garden.
Chef style: Chef Choi is one of Korea’s most creative chefs, known for his use of molecular gastronomy with traditional Korean ingredients and an Italian twist. While he is most well-known as a chef, he’s also a TV celebrity in his home country, currently starring in cooking variety show Please Take Care of My Refrigerator.
Fun fact: Known as ‘The Crazy Chef’ for his daring and unusual flavour combinations, Choi is sometimes billed as Korea’s answer to Britain's Heston Blumenthal.
KoreaNYC: Choi will be teaming up with Jinmo Jang and Carlo Mirarchi at Blanca on Thursday 9th June.
http://www.elbonthetable.com/ 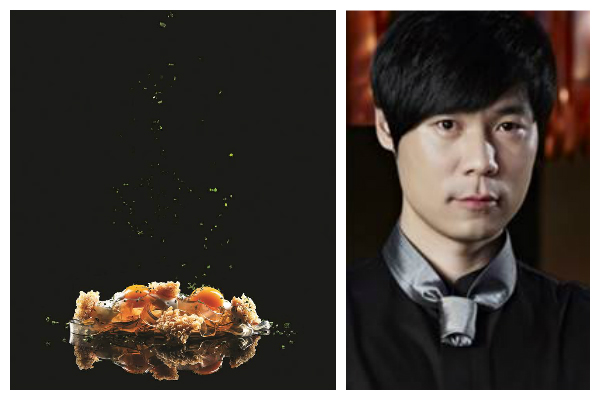 Hyun-Seok Choi and his capellini with lobster cream powder

The restaurant: With seating for just 12 people on luxurious leather chairs around the counter of Mirarchi’s open kitchen, Blanca has become one of the most coveted spots in NYC.
Chef CV: Mirarchi is largely self-taught and opened Blanca in 2012 after introducing tasting sessions at his adjacent pizza restaurant, the widely acclaimed Roberta’s.
The food: An epic tasting menu of 20+ courses is accompanied by a perfectly paired soundtrack. Dishes are influenced by the chef’s Italian heritage and might include nduja ravioli seasoned with anise hyssop (a type of herb) or wagyu beef paired with roasted palm hearts and vincotto.
KoreaNYC: Chef Mirarchi will be opening his doors to Korean chefs Jinmo Jang and Hyun-Seok Choi for a special, intimate dining experience on Thursday 9th June.
http://www.blancanyc.com/ 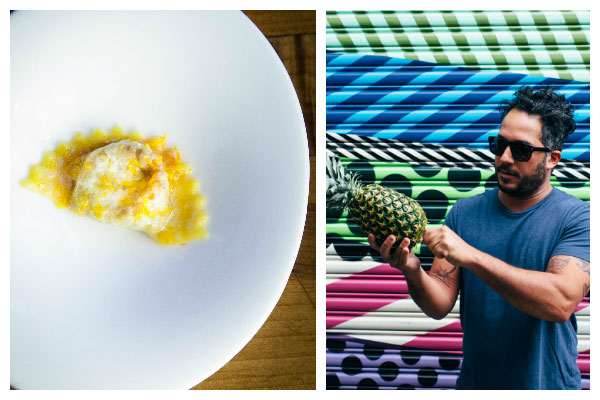 Carlo Mirarchi and his nduja raviolo

The restaurant: Mingles has been rapidly gaining popularity in the last year or two and made its debut on the Asia’s 50 Best Restaurants list this year at No.15, winning the Highest New Entry Award, sponsored by John Paul, as well as The Best Restaurant in Korea.
Chef CV: Young chef Kang trained under acclaimed Spanish cook Martín Berasategui in San Sebastian and later enjoyed stints at Nobu in Miami and the Bahamas. He opened Mingles – so named because it ‘mingles’ Korean and European influnces – in 2014 in Seoul’s buzzy Cheongdam-dong district.
Key ingredients: Mingles’ seasonally changing menu is divided into sections such as ‘grains,’ ‘vegetable’ and ‘fish,’ with jang and cho – Korean traditional fermented sauce and vinegar – playing an integral part. Main courses include charred beef tenderloin with truffle ‘Jang’ sauce, followed by the ‘Jang trio’ dessert of Doen-Jang crème brulee, Gan-Jang pican, ‘Gochu-Jang’ grains and vanilla ice cream.
KoreaNYC: Chef Kang and Tony Yoo from 24 Seasons will be cooking with renowned New York chef Dan Barber at the Manhattan branch of his restaurant, Blue Hill.
http://www.restaurant-mingles.com/ 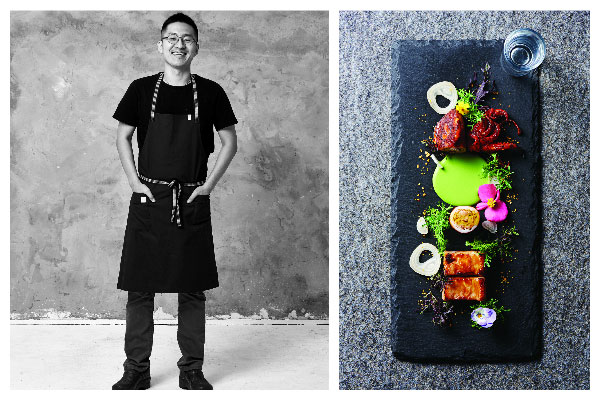 The restaurant: 24 Seasons (Yisipsajeolgi in Korean) serves the finest Korean dishes cooked with seasonal, organic ingredients and traditional fermented condiments. Dishes might include watery kimchi with cabbage, radish, date and chestnut or low-temperature braised wild boar rolled with pumpkin leaves and doenjang sauce.
Chef CV: Chef Yoo gave up his career as a designer to pursue his love of food and began travelling around the world on his culinary quest. Inspired by everything from temple cuisine to western food, he developed his Hansik menu at 24 Seasons in Seoul’s Gangnam district.
KoreaNYC: Chef Yoo teams up with Mingoo Kang of Mingles to cook at Dan Barber’s Blue Hill in Manhattan on Friday 10th June before joining the other Korean chefs at the grand finale at Jungsik on Saturday 11th.
http://www.cheftonyyoo.com/ 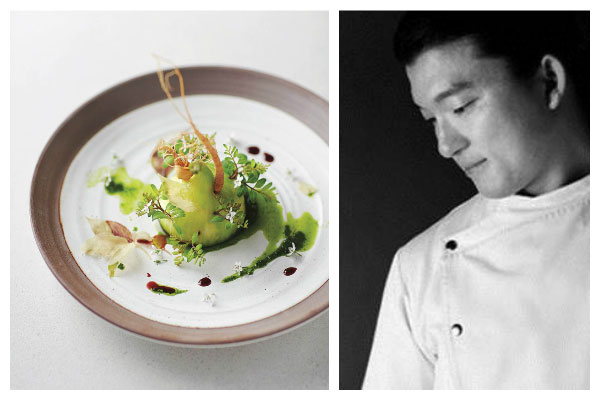 The restaurant: Blue Hill in New York City is the original restaurant in the series and opened in 2000 in Greenwich Village to showcase local food and wine. Chef Barber later opened Blue Hill at Stone Barns in Pocantico Hills, 45 minutes from New York City, which entered The World’s 50 Best Restaurants list in 2015 at No.49. The restaurant moves beyond farm-to-table, instead aiming to offer “a revolutionary new way of eating”.
Chef CV: Executive chef and co-owner Barber was appointed by US President Barack Obama to serve on the President’s Council on Physical Fitness, Sports and Nutrition and has won multiple James Beard awards including Best Chef for New York City in 2006. In 2014 he published The Third Plate (The Penguin Press), recounting his experiences with chefs, farmers and seed breeders around the world.
Signature dishes: Blue Hill has a four-course Tasting Menu and a six-course Farmer’s Feast, inspired by the week’s harvest, and dishes might include Blue Hill Farm grass-fed veal, This Morning’s Farm Egg or Jerusalem artichoke in the style of a baked potato with smoked cheese and bacon bits.
KoreaNYC: Chef Barber invites Korean chefs Tony Yoo and Mingoo Kang to cook with him at his New York restaurant on Friday 10th June.
http://www.bluehillfarm.com/dine/new-york 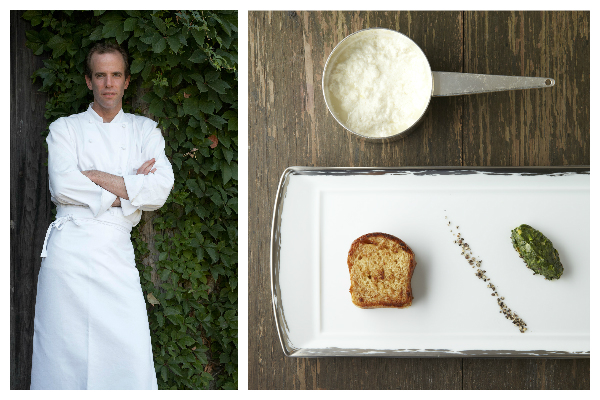 Dan Barber and his wheat brioche, ricotta and spinach marmelade

The restaurant: As the Highest New Entry to Asia’s 50 Best Restaurants in 2014 at No.20, Jungsik has been a firm favourite in Seoul since opening in 2009. Young chef Jungsik Yim has been credited with bringing molecular mastery to Korean food and in turn introducing his modern Korean cuisine to the world stage.
Chef CV: Jungsik trained at Aquavit and Bouley in New York and Zuberoa and Akelarre in Spain before returning to Seoul to set up his eponymous restaurant in Cheongdam-dong. He opened his New York branch in 2011.
KoreaNYC: The three-day KoreaNYC extravaganza will culminate at Jungsik’s New York branch, with all five Korean chefs cooking together for a special Gala Dinner on Saturday 11th June.
http://jungsik.kr 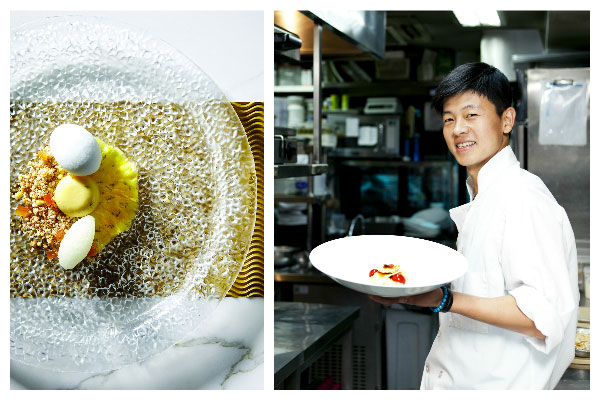 Looking for tickets for these events? Stay tuned to this page and our social media channels – the tickets will be on sale direct from the restaurants’ websites in early May and we will be announcing it on our Instagram, Facebook and Twitter pages.