At her restaurant Fusions by Tala in the Gulf island-state of Bahrain, dynamic young cook Tala Bashmi is helping reinvigorate Middle Eastern cuisine. The newly crowned MENA’s Best Female Chef for 2022 discusses her soccer-mad adolescence, sexism in the kitchen and how she reinterprets her region’s most traditional dishes

On meeting Tala Bashmi, her determination and drive for self-improvement are palpable, albeit laced with considerable personal charm. This is a young chef who has overcome plentiful barriers – from entrenched views on her country’s culinary staples to gender stereotyping – to become one of the most exciting talents in the Middle Eastern restaurant scene.

In early 2020, she relaunched a dining space in Manama’s iconic five-star Gulf Hotel Bahrain with her own name in the title. Fusions by Tala is a physical reflection of the chef’s philosophy, with an open kitchen, theatrical service style and modernistic takes on regional classics.

“My goal when opening the restaurant was to re-educate my local audience and show them our food in a new light – and for foreigners who have never experienced our food to learn about our memories and our history,” says Bashmi. “I’m trying to create a culinary renaissance for Middle Eastern food and for Bahrain especially.” 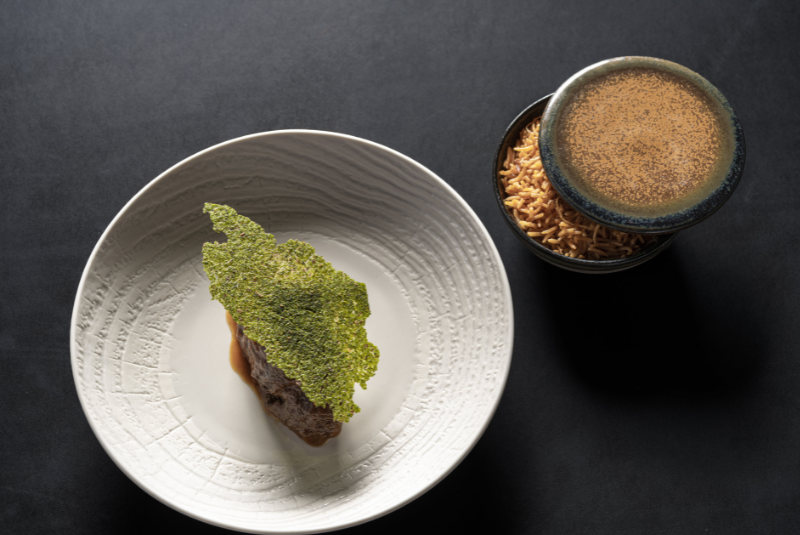 The current five-course tasting menu is soon to be extended to eight courses, though an à la carte option remains available to guests in the 45-cover dining room, which is abetted by a spectacular terrace lounge for pre- and post-dinner drinks.

Here we get to know this Bahrain-born rising star a little better:

How are you trying to change international perceptions of Middle Eastern food?
Growing up and studying in culinary school, you learn about the foundations of French cuisine, Italian cuisine and so on. We've seen the development of these cuisines and great chefs turn them into the avant-garde versions of what they should be. Middle Eastern and Bahraini cuisine has always been viewed as comfort food, as a meal to share with family – and there’s nothing wrong with that – but young generations have lost touch with it and don’t find it attractive. I’m trying to reinterpret it for them, and also introduce this food in an elevated way to those people who have never tried it before.

Can you give us an example?
Sure. Bamia is traditionally a stew made with off-cuts of meat and okra, and it's cooked for hours until the meat is really tender. Instead, I've utilised wagyu beef cheeks, and the okra comes in the form of a crispy ‘glass’ which covers the entire piece of meat. I then serve it with a side dish of tomato rice broth. It’s kind of funny but it’s controversial, especially for the older generation who expect the okra in a stew, but it captures what I’m trying to do. Visually, you think it's something completely different, but when you eat it, it takes you back to a nostalgic dish you might have grown up with. 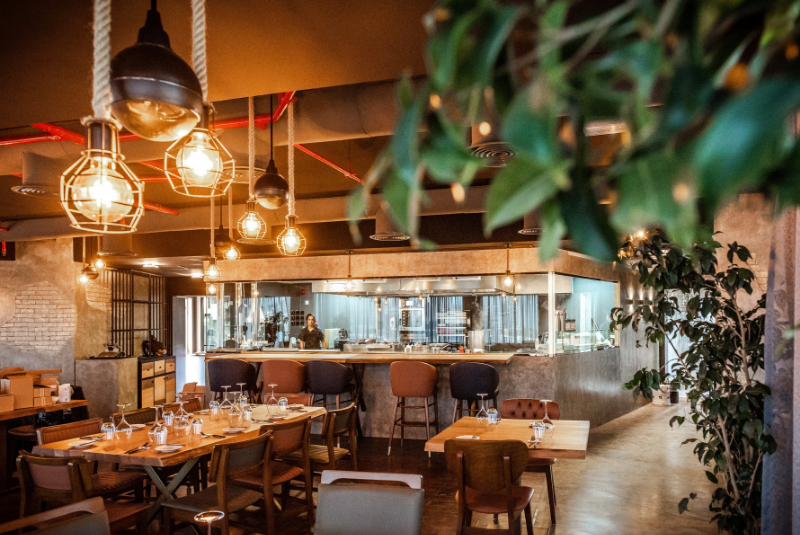 The interior of Fusions by Tala, in Manama, Bahrain

Where did your love of food and cooking stem from?
Food gave me comfort growing up. I wasn't a very social child, but food kept me company. My father was always taking me out to markets and introducing me to weird things and strange dishes. Pigeon, for example, is not something so common for people to eat in Bahrain. I remember there was a day when I had a couple of friends come over after school; to me, eating pigeon was normal, but when we put stuffed pigeon on the table, they looked at me like “Oh, gross!” I got used to being made fun of for the strange things I was eating, or made people eat, and it's these introductions to different ingredients and dishes that made me want to experiment and never hesitate when it comes to trying something new.

So your family has been an important influence?
Yes, I’m one of three sisters and throughout my entire life I always found comfort and joy around the table and in cooking with my dad and for my family. My father is a writer and also a huge foodie – he’s a cultural food historian, in a sense. He introduced me to the oldest cookbook in the Arab world, which has recipes that are crazy, but it’s very interesting to see how they’ve developed. My father is very knowledgeable in this field, and also my biggest critic.

When did you decide you wanted to cook professionally?
Growing up, my life was dedicated to playing football and I wanted to be a professional soccer player; that's all I did, all the time. I headed to the US first [for college] to pursue soccer and then I got an injury so I couldn't continue. I moved to London and studied illustration and fine art and then I moved home. But even back when I was 17 and graduating high school, I remember thinking, ‘Would it be so crazy if I wanted to go to culinary school?’ I had that realisation that you can turn a person’s day around with a good meal. 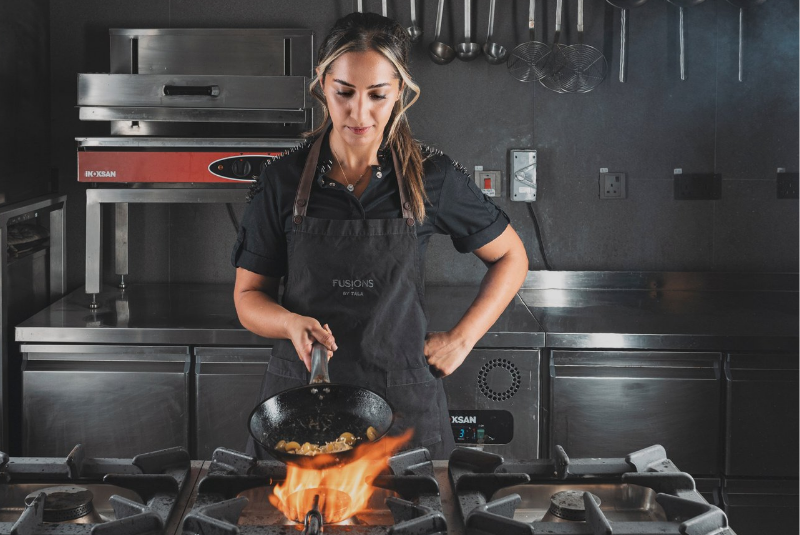 Soccer’s loss was food’s gain...
Haha! It’s quite random, but football, art and food kind of complement each other. You learn discipline from being in a team and I bring art into my food, for sure, so somehow it worked out... In Bahrain I started my home cooking venture, Baked by T, and I realised I wanted to legitimise myself in a sense, so I joined the Gulf Hotel and worked hard in order to prove that I was eligible for its management training programme. I knew I had to claw my way in and as part of that scheme they sent me to Switzerland.

How was that?
I'm not going to say my time in Switzerland was perfect. It's the struggle and the hardship that made me who I am. Culinary school was great: you're like a chick being nurtured. Then you go out into the real world as interns. The chef I worked under for six months was not the nicest, to say the least, but the experience taught me how to be resilient and also that I really wanted this career, despite the difficult circumstances.

Did you experience overt sexism?
Yes. 100 per cent. The chef literally referred to me as ‘woman’ for six months. I think the combination of being a woman, an Arab and a Muslim was like the Holy Trinity of what he hated. I knew his goal was to make me quit. So it makes me really proud of myself for making it through that time and I hope he hears the news [of this award] someday, wherever he is now. I don't know how it's going to make him feel, but I know how it makes me feel. I made it.

What do you hope this award might do for you and your cuisine?
I hope people will finally be able to see us and our food in an interesting light. It brings attention to the origins of our cuisine – as an island and port, Bahrain is historically where so many spices were traded. I feel like it's our time to shine, as Bahrain and as the Middle East. Because we really love food in this region! 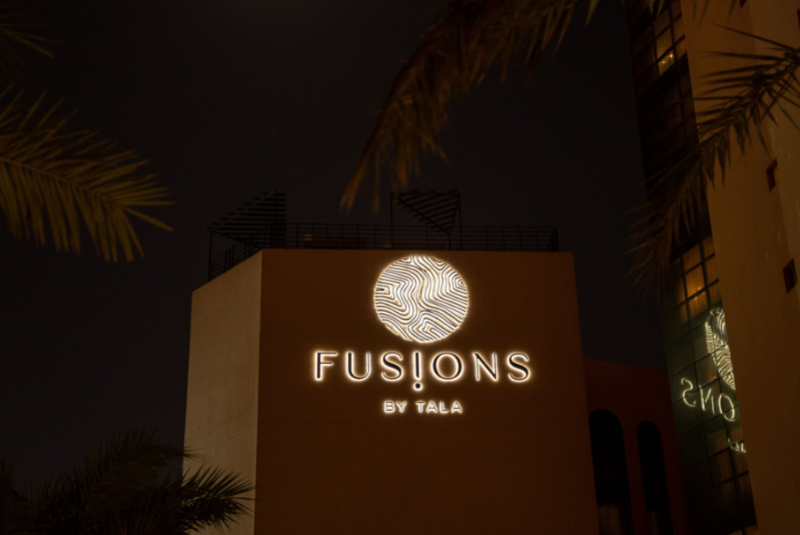 After Bashmi's success at the restaurant, Fusions by Tala was redesigned in February 2020

How was Fusions by Tala born?
I worked my way up to sous chef for the hotel, which has 10 restaurants in total, but I always had my eye on this restaurant, Fusions. It wasn't doing so well, it was more like a tacky bar, but I knew I could transform the space and make it my own. Eventually, they gave me one year to turn it around with the existing equipment, team and set-up, and if I succeeded, they would renovate the space. Thankfully, we made it work. We redesigned it and opened Fusions by Tala in February 2020 – then one month later we closed [due to the pandemic]. It was devastating for all of us, but slowly we’ve been able to open up again. Bahrain borders Saudi and visitors from there are a big part of our economy, so now the bridge [between the two countries] has reopened, it’s really made a difference.

You started out with a baking venture. Do you still love desserts?
Yes, of course. I would say one of my signatures is a version of baklava which is deconstructed. We make our own saffron ice cream with mango orange blossom gel, fresh mango, caramelised pistachios and crispy filo, layered into a tower. I like my food to be fun, so I ask guests to literally smash it, mix it all up, get messy and enjoy. We tend to end up having guests smashing each other’s desserts.

Looking back, is there any particular advice you’d give to your younger self?
Don't be in such a hurry to get on the pass with a pair of tweezers. Savour the journey because it's the moments of repetition and practice that will let you hone your skills and make you the best chef you can be.

Finally, why do you see the launch of Middle East & North Africa’s 50 Best Restaurants in 2022 as an important step for the region?
It was always a dream of mine to have 50 Best here one day and I can't believe this day is here. The awards create this cross-cultural exchange. It makes it possible to change whatever view or image or fears people may have of this part of the world. Food is what brings us together.


Bashmi will receive her recognition at the Middle East & North Africa’s 50 Best Restaurants 2022 awards ceremony to be held in Abu Dhabi, UAE, on Monday 7th February. Visit the MENA’s 50 Best Restaurants website to discover how the list is being created and join the community on Instagram, Facebook, Twitter and YouTube to be the first to hear about the latest news and announcements.