Speaking in San Francisco at #50BestTalks: Voices for Change, presented by Miele, chefs Enrique Olvera of Pujol in Mexico City and Daniela Soto-Innes of Cosme in New York discussed the changing perception of Mexican food and the challenge of opening new restaurants.

Daniela Soto-Innes met her mentor Enrique Olvera in 2012 in New York, where she was attending a charcuterie class. They immediately hit it off and soon the young chef went to Mexico City to spend a weekend at Pujol, Olvera’s restaurant ranked No.13 in The World’s 50 Best Restaurants 2018. She ended up staying for a year and a half, when she told Olvera that she was ready to move to New York. “He said: ‘Okay, let’s go. We’ll open a restaurant there’,” recalled Soto-Innes.

When they opened Cosme in late 2014, Olvera and Soto-Innes found they had to fight a number of stereotypes and misconceptions around Mexican food in order to carve a space for their restaurant in the US. “One of the barriers is that a lot of people think about Mexican food as something that is too folkloric,” said Olvera on stage at #50BestTalks. “Mexican restaurants haven't been able to change this perception and I think this is what we wanted to do in Cosme: to show ourselves. Not necessarily show the folkloric aspect of our culture, but we did want to keep it very Mexican.”

Over Cosme’s successful four-year history, not only have the chefs shown diners that Mexico isn’t only corn tortillas and guacamole, but they also had to convince the local cooks that a Mexican restaurant in New York could work. “We started with four cooks. Nobody really wanted to work in a Mexican restaurant and we started with 100 covers, then 200, then 300 and we still had four cooks,” said Soto-Innes. “But now a lot of people are more interested in Mexican food and they're actually proud to be cooking it, which is amazing.” 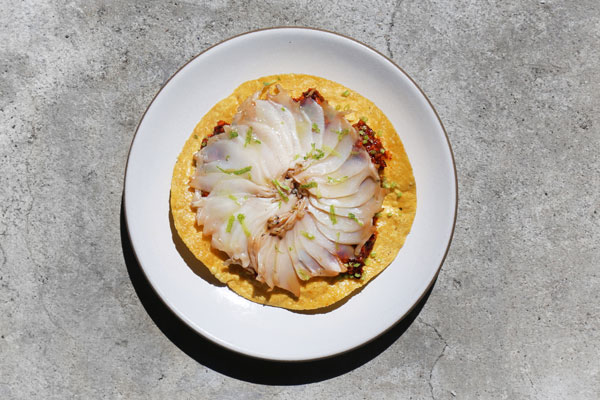 Cosme was also a chance for Olvera to reinvent himself and his restaurant concept, after 15 years of running his flagship Pujol. It provided an opportunity to rethink the experience and the way the restaurant is run. Under Soto-Innes’ direction, Cosme’s kitchen is a high-energy, positive and inclusive space. And since breaking the ice with Cosme, Olvera and Soto-Innes keep coming up with new restaurant concepts.

“We wanted to have breakfast [in New York], we wanted conchas and chilaquiles and quesadillas and we couldn't go anywhere, and Mexico City was four hours away,” said Soto-Innes. “So we said: 'Let's open a restaurant'.” The resulting eatery, Atla, which opened in 2017, is a popular all-day café that serves Mexican-inspired dishes and incorporates a mezcal bar, with a casual and informal atmosphere. Olvera is also opening a new mezcal bar in the space that housed the old Pujol in Mexico City in December this year. He will open the bar with Cosme’s former general manager, Gonzalo Gout.

While the offer is Mexican across the board, the chefs agree that it is important to be engaged with the local community. “We get asked a lot if we're authentic,” said Soto-Innes. “If you're authentic, you use whatever you have around you. So it's easier for us to open restaurants now, we just use the producers and the farmers that are around us and we use dry ingredients like corn, beans and chilli from Mexico.”

The next step in Olvera and Soto-Innes’ journey will be in Los Angeles, where the pair are planning to open a new space with a hybrid concept between Pujol and Cosme. The restaurant is slated to open in May 2019 and the chefs both expressed great excitement at the prospect – although one is left wondering how long it will be before one of them says, once again, ‘Let’s open a restaurant’.

Watch the full video with Olvera and Soto-Innes at #50BestTalks:

Watch the full playlist from #50BestTalks: Voices for Change and stay tuned for the upcoming speeches from Virgilio Martínez and Lara Gilmore.