After entering the Latin America's 50 Best Restaurants list at No.50 in 2017, Mishiguene in Buenos Aires climbed an impressive 32 places to No.18 in 2018, earning the Highest Climber Award. We spoke to chef-owner Tomás Kalika about the restaurant's success.

Expelled from the first of four schools starting in second grade, 17-year-old Tomás Kalika’s immediate destiny was an Israeli kibbutz. Leaving his home city Buenos Aires with no Hebrew and few English words, Kalika managed to forge a way into leading Israeli chef Eyal Shani’s kitchen to take up his first paid job as a glass washer.

Returning to Argentina eight years later with Michelin-starred restaurant experience under his belt, Kalika worked on cruise ships before opening The Food Factory, which he then closed two years later. In 2014, he teamed up with gastronomical entrepreneur Javier Ickowicz to open Mishiguene, which rescues Jewish recipes and ingredients and passionately conveys their stories.

In the Argentine capital, which is home to the world's third-largest Jewish community, Mishiguene has proved a hit with Kalika's Argentine-Jewish dishes such as sous-vide guefilte fish wrapped in carrot ribbons and topped with fish roe and micro greens; Mi Baba Ganoush with char roasted eggplant, yoghurt sauce, toasted almonds and tahini; and Kalika's bubbe (grandmother)'s varenikes, a potato-stuffed dumpling.

As a rebellious teenager, was becoming a chef even on your radar?

I rarely went to school, but I loved playing guitar with my band, smoking marijuana and watching cooking TV shows. I remember seeing Francis Mallmann and Dolly Irigoyen on the television, and my mum, knowing I wouldn’t finish high school, suggested I took a cooking course.

Instead, I ended up going to Israel, sat an exam and was sent to a kibbutz in the north, where I alternated between working and studying each day, getting up at 4am. After a week, I’d had enough, callouses all over my hands, and asked to transfer to the kitchen, which catered for 7,000 people: I was a glass washer. 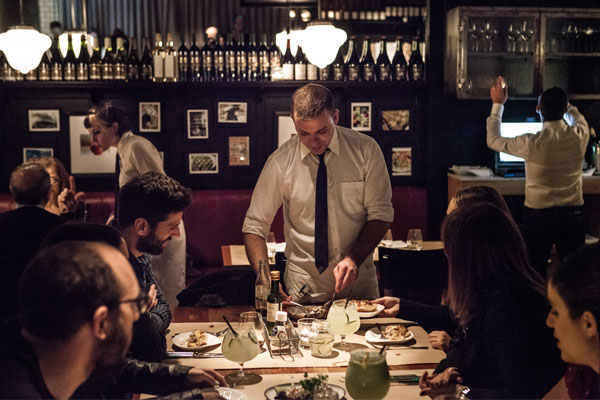 How instrumental was living in Israel to your future?

Israel was a great school for me. After working at the kibbutz, I moved to Jerusalem to ‘become a chef’. Imagine that! An experienced glass washer! One day I was looking in the classifieds and read about Eyal Shani: I was determined to work for him. I went to his restaurant Ocean and sat on the pavement every day for a week until I plucked up the courage to knock on the door. He wasn’t there. I insisted on waiting, rude and insolent teenager that I was.

When Eyal arrived, he asked how I could help, and I said, in basic English: “I need to work, I need to eat, I need money.” He asked if I could cook, and I said no, but I was a fast learner. He said no and I started crying (I was very young). He offered me a job washing glasses. “Break anything, miss a day, lie or steal from me and I’ll sack you. But, you can learn here. Put on a jacket – you start now,” he said. I felt like a million dollars.

I didn’t speak much Hebrew so my boss told me to buy a notebook to draw ingredients and tools and its name on a piece of paper, then stick it to the wall. That’s how I learned; I had to work harder than anyone else but Eyal was my idol and working for him was very special. I returned to Argentina a cook.

Your first project, The Food Factory, closed after two years. What did you learn from that experience?

After working as an executive chef for Princess Cruises for two years, I opened The Food Factory in Buenos Aires. It was a big mistake from start to finish. I thought I was more capable than I was and that I could manage a big restaurant on my own. After it closed, I didn’t work for a long time until Nucha’s owner Javier Ickowicz called me to help him out at the bakery’s factory. I was pretty sad working there as I believed I was a big deal even though I hadn’t actually done anything notable, going from running my own restaurant to making ham and cheese sandwiches. But I did it, and became great friends with Javier, who suggested we start a genuine project, a Jewish restaurant, together. I said “¡Ni loco!” (No way!). That’s how Mishiguene was born [the name means 'crazy' in Yiddish]: we opened in October 2014.

At Mishiguene, you rescue recipes such as varenike. What are your most emblematic ingredients and dishes?

It’s impossible to compete with people’s emotive memory and it was important to not simply replicate what bubbe [grandmother] cooks at Mishiguene. But there is a story behind every recipe. Culinary culture has passed down through the generations and that’s Mishiguene’s greatest virtue.

My number one ingredient is aubergine, followed by lemon then tomato. Aubergine was one of Eyal’s favourite products so that had an impact on me: it’s magnificent and versatile, whether it’s smoked, fried, cubed, puréed or grilled. Baba ganoush is a key Mishiguene dish and it uses all three ingredients.

How do you mark the Shabbat?

As the Shabbat indicates the start of a new week, families usually get together at home; it’s a moment of joy and celebration. But, as we’re working at the restaurant, we create a party atmosphere. A group of musicians pops up at midnight, all the cooks come out of the kitchen and along with the wait staff we sing and dance, celebrating what we do: that’s Mishiguene.

You’re in pre-production with Proyecto Diáspora. What’s that about?

A cultural culinary collaboration that maps out Jewish ingredients, dishes and places, Proyecto Diáspora is much more than a TV series or book. Mishiguene opened a door to the untold story of Jewish cuisine, which we want to continue researching. I’ll be travelling to Toledo, Athens, New York, Warsaw, Mumbai, Morocco, Jerusalem and Tel Aviv – all distinct cultures – to carry on learning while sharing Jewish cuisine with the world. An eight-episode series, it’s due to be screened in December 2019.