Mishiguene, which means 'crazy' in Yiddish, was one of three Buenos Aires restaurants to make their debut into the Latin America's 50 Best Restaurants list this year. 50 Best and partner Aspire Lifestyles spoke to chef Tomás Kalika, who also has a second restaurant, Mishiguene Fayer, about the inspiration for his cooking, his perfect dinner companions and his grandmother's food.


Your cuisine is modern Jewish. While cooking dishes from various areas, do you keep them fairly traditional or make them your own?

I grew up in a Jewish home where my grandmother's cuisine was very important. The Jewish cuisine of Eastern Europe was her repertoire. I started in Jerusalem as a chef but with a strong base of classic French cuisine. No doubt that the culinary world of Jerusalem was also important in my training.

The wide variety of cuisines that make up the Israeli culinary culture is very large – the cuisines of the Mediterranean Levantine, North Africa, Europe and the Middle East all coexist in the same city.

Today in Mishiguene, we take the recipes of my grandmother Olga and also those of many others. We bring them from the past to the present to recreate them through a modern lens, with current cooking techniques.

What is your favourite dish from your childhood and do you prefer your version or the original?

My favourite childhood dish would be my grandmother Olga's varenikes – the memory of my grandmother kneading those varenikes in her kitchen, her hands full of flour, the aroma of fried onions, the schmaltz and the gribenes. All this is linked to my emotional memory so it would be impossible to prefer any other dish to that which my grandmother made for me with so much love and cariño (affection). 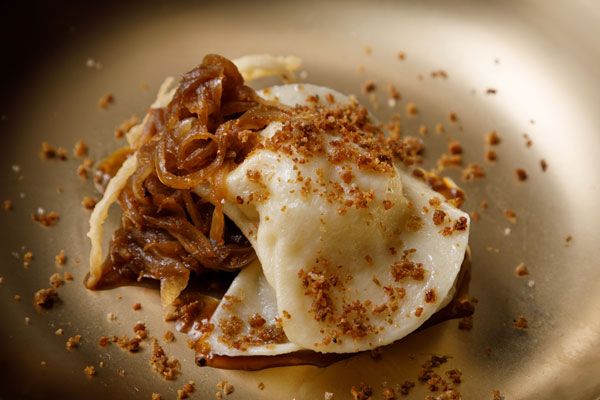 What is the most important value in cooking that you teach your kitchen team?

In Mishiguene, we have a mantra: make it worthwhile. It is a concept that I try to apply to each step and in each instance. Do not advance as automata but on the contrary advance with consciousness to make everything we do have meaning.

When friends come to town, where do you take them, both to dine and to get an insider view of Buenos Aires?

What has been your most memorable food destination and why?

There are many cities to which I am attracted for their diversity, breadth and style. Several cities come to mind, such as Jerusalem, Tel Aviv, New York, San Sebastian, Lima, Paris ... but today I think Buenos Aires. It has grown and changed a lot. It's the moment when Buenos Aires can begin to show itself as a destination. 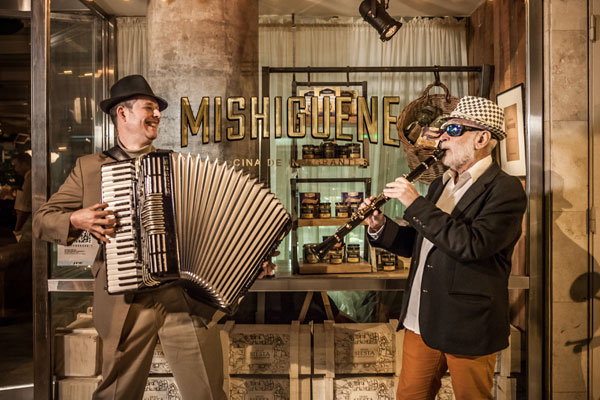 You can take five chefs to dinner at any restaurant in the world. Which chefs do you choose and where do you take them?

My grandmother Olga – I would take her to Mishiguene because she wasn't able to see everything that I achieved in recent years and because much of what we do in Mishiguene is in her honour. I would love to share with her the recipes we are developing and get her opinion.

Luis Andoni Aduriz of Mugaritz – With Andoni, I would walk the streets of New York and enter every place that calls our attention. A sort of tapas trip, but in New York. We would talk about gastronomy, friends, politics and a bit of everything. Andoni is great. He is a dear friend, one of the most intelligent and irreverent chefs I've ever met... and most of all, talks with Andoni are always great and unforgettable

Germán Martitegui of Tegui – I would take him to Blue Hill at Stone Barns. I think it has a lot in common with the way Germán sees the gastronomic industry, the care for the produce and above all the producers. I know we would have a great time. I admire his work, his way of seeing gastronomy.

Dan Barber of Blue Hill at Stone Barns – One of the best culinary experiences of my last years was in Blue Hill in the farm outside of New York. I felt overwhelmed by the incredible concept they created, with so much creativity and above all the incredible style with which they carry out each recipe. I would love to share a table with him. I would take him to Tegui – I think Dan could be fascinated with what Germán is doing in Argentina.

Harry Sasson of Harry Sasson in Bogotá – Because Harry is adorable, because I enjoy spending time with him, because we have recently joined in a search that will come to light very soon. I would take him for hummus and falafel in Tel Aviv and Jersualem and make a tour to find the best of all... of course all accompanied by some cold beers.

What has been the impact of Mishiguene entering Latin America’s 50 Best Restaurants?

I am very honoured and I feel it's an incredible achievement to have entered this list with a concept like ours, wow! But to be honest the 50 Best hasn't changed my life. I see the list as tool that must be capitalised in an intelligent way to raise the bar with which gastronomy is created and projected in general. The list, if used in an intelligent and healthy way, provides greater visibility and helps restaurants to continue improving every day.

This interview was originally published on the website of Aspire Lifestyles, Official Concierge Partner to Latin America's 50 Best Restaurants.

Watch the highlights from the 2017 awards ceremony: