The reincarnation of a former World’s Best Restaurant in Copenhagen enters this year’s list at No.2

If there’s one thing René Redzepi does well, it is reinvention. He is not afraid to undo years of hard work by wiping the slate and starting over. In fact, he has done it many times, uprooting his entire team for quick-fire, short-run residencies in Japan, Australia and Mexico. But now he is back in Copenhagen with a permanent Noma built from scratch over the course of several years – and with two Michelin stars and a debut spot at No.2 in the 50 Best list, he has already won the approval of critics and anyone lucky enough to secure a reservation.

Perhaps his most original move was to divide Noma’s year into three distinct seasons – seafood from January to June, vegetable from June to September and game and forest from October to December. The restaurant closes for three weeks to prepare everything anew for each season, with an entirely fresh menu each time and updates to the décor.

“It dawned on us that we really only have three strict ingredient seasons in our Nordic region,” Redzepi said before opening the current Noma. “We have a very cold season when nothing grows. That's when the ocean is in season. Why haven't we just been focusing on the ocean instead of trying to put in all these things that are necessary in the standard tasting menu? Then comes a green season when ingredients are abundant; you can pick and choose from hundreds of things. So why haven’t we just focused on that? Why were we always pushed into having that meat main course because that's what the tasting menu dictates? When the leaves start falling from the trees, game comes into season – berries, mushrooms – that's when you should eat meat.” 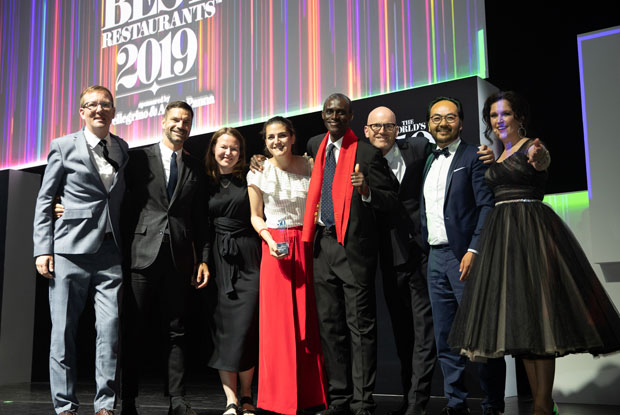 Now Noma’s dishes have become stars in their own right. Taking the idea of ‘food that looks like other food’ to another level, Redzepi has created ‘shrimp’ made from rose hips and gooseberries (stuffed with actual raw shrimp); a beetle made of berry leathers and black garlic; a rose-scented cake shaped as a plant pot; and toffee in the shape of duck’s feet, made from duck fat instead of butter. A read through the comments on Instagram will expose the level of awe at his creations: one called his duck wing “hauntingly beautiful”; many have called his food “mind blowing”.

But it’s not just the food that has helped propel Noma to where it is today – it’s the whole experience. It’s the greeting at the roadside by a staff member, who walks diners through Noma’s gardens and greenhouses to the main building. It’s the welcome from the kitchen staff, who variously deliver their dishes with extensive explanations tableside. It’s the log-cabin décor with its lush greenery, wooden tables and glass walls to give the feel of being outside. And it’s the fact that everything is dictated by the season – not just the menu, but the wall hangings and end-of-meal keepsakes such as a carrot or a bird made out of string - the perfect “I went to Noma” souvenir.

Here are three of his most creative inventions:

With a technique learned during his time in Tulum, Mexico, Redzepi created a flatbread cut into the shape of a crab and fried in hot fat so that it inflates like an infladita. The dish is then served with freshly cooked, sweet crab meat on top.

“You might ask, why go that extra mile to make the flatbread look like a crab?” Redzepi says. “After all, it’s just flatbread. But the reality is that it isn’t just flatbread. It is the ingredient, but it’s also the craft, it’s the technique, it’s the surprise, and pride in the work we do every day. To us, it’s about devoting as much time to making a piece of flatbread as you would cleaning and carving the finest cut of meat or fish. It is simply who we are – doing that little bit extra.”

“Treat your vegetables with the same care and effort as you would a fine cut of beef,” Redzepi said in an Instagram post about a cauliflower cooked in the smoker. “It’s not meat. It might be better than meat.” This is the approach he took to the celeriac shawarma, the star of his first vegetarian menu.

Inspired by tacos al pastor from his time in Mexico, Redzepi’s team made the vegetable look just like a glistening lamb shawarma by slicing it into hundreds of tranches and adding layers of truffle juice and purée before caramelising it over several hours. The celeriac ‘meat’ is carved at the table and served with truffle, steamed greens, white currants and grilled apple. Redzepi called it “one of the best dishes we’ve ever made” and said that the vegetarian season was “the most challenging, but also a gratifying and eye-opening time of my career”.

At the end of the growing season, Redzepi said of his Instagram account: “Vegetarians, I need to warn you. The next many months will have pics and videos of animals in all cuts and sizes.” The chef was true to his word, posting photos of his duck brain dish, complete with a duck’s head with the top of its skull surgically removed.

Then there was the duck breast, separated by thick string from an actual blue-feathered duck wing, which is used to pick up the tempura-style poultry bite. While some called it “unsanitary” and “sad”, others said it was “conceptually stunning”. Undoubtedly provocative, Noma’s presentation of meat that more closely resembles its original animal form is a bold move towards greater consciousness from the chef who says foraging is as important as learning to read and write.


Now watch as Redzepi reflects on the new incarnation of Noma in our Best and Beyond series: