Torontonian Christina Veira was palpably shocked when she was announced as the Roku Industry Icon at the ceremony for North America’s 50 Best Bars in New York. Though her surprise was unwarranted, as Emma Janzen examines her diverse and dazzling career that prioritises community, equality and fairness over everything else

Describing Christina Veira’s impact on the bar world in a nutshell is almost impossible. As a vital member of Toronto’s cocktail scene, Veira boasts an impressive resume that includes: WSET instructor, director of programming for Toronto Cocktail Week, bar and beverage curator for Restaurants Canada, general manager at Mordecai (ranked No.47 in the first-ever list of North America’s 50 Best Bars), hospitality educator, fundraiser and national coordinator for the Canadian chapter of the all-female bartending competition Speed Rack.

A vanguard for social change within the hospitality industry in ways both small and outsized, the Toronto-born heavyweight has long used every tool in her barkit to make the bartending industry a more equitable, safe, and community-oriented place, which are key reasons why she was voted by the Academy as the Roku Industry Icon as part of North America’s 50 Best Bars 2022.

Like many young adults looking for a side gig to help pay their way through school, Veira landed in the hospitality industry while studying at the University of Toronto. She started out working in kitchens, doing prep work and bussing tables before moving to the front-of-house positions. The public-facing jobs suited her well. “My family is involved in the church, and our church had a very heavy focus on entertaining and making people feel welcome. And my mom was an administrator for the church, so I was always helping her with things – holding keys or setting up platters of food or coffee stations. I was a bossy child running around doing all this stuff,” she laughs. 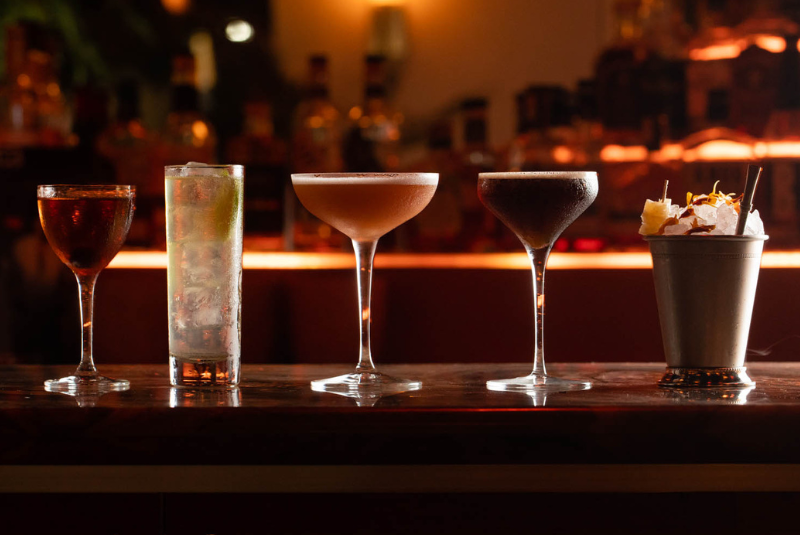 Those skills paid off as her career veered away from restaurants and towards cocktails. Finding her way forward as a woman of colour in an industry largely dominated by men posed its challenges, but she persevered, using her book smarts and social skills to carve out a space where she would be taken seriously by her peers. “I am great with guests, but I am not the typical outgoing bartender personality,” explains Veira. “I did know beer and wine though, so I started to get into spirits and cocktails from an educational perspective. I knew I could connect with people that way. I am a real nerd and I knew I could use that to get my foot in the door.”

This revelation led to her role as a WSET educator, where she has worked to create training programmes that address some of the industry’s most pervasive (and oftentimes least acknowledged) issues. “I’m still doing seminars in hospitality and have done a lot around gender-based violence and sexual violence in nightlife and things like that,” she says. “I’ve always been outspoken on those issues but I ended up bringing structure to those discussions through that programme.”

Participating in cocktail competitions – “which I did at first just to meet people,” she explains – expanded her network and eventually she landed on the advisory board for Toronto Cocktail Week. Her role grew alongside the festival and now she is the director of programming for the event, working behind the scenes to integrate a broad and diverse spectrum of events and panel discussions into the traditional cocktail week model to bring more important conversations into the mainstream. “If you want to have a good range of people who represent the community [at an event like Toronto Cocktail Week], you have to make sure that the person doing the programming is a person that people trust. I think that’s why I’ve been useful – I already have that personal rolodex of relationships and I’m also willing to grow the ones I don’t have, so it’s not just a cool kids’ club.” 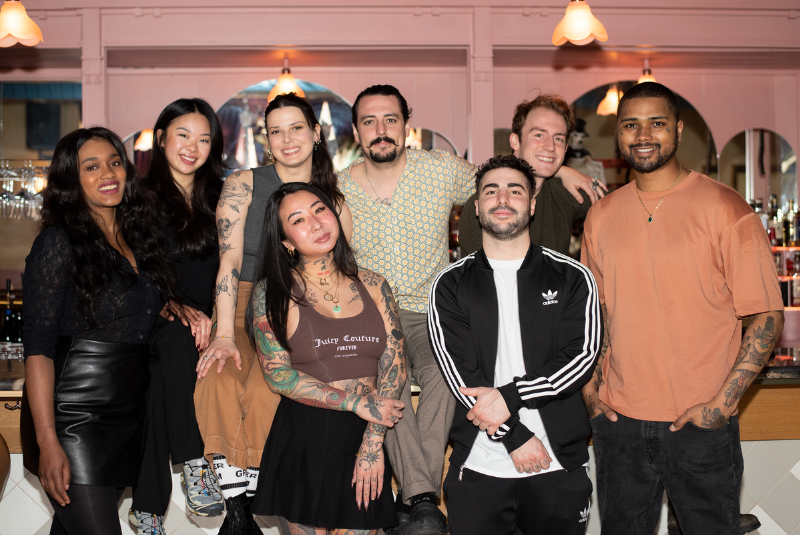 As a co-owner of Bar Mordecai she has worked to buck the traditional brick-and-mortar status-quo by creating a space that would feel welcoming, accessible and inclusive to both staff and guests. The kind of place where someone can order a serious cocktail but “if you just want to dance on the banquette to Drake while slamming an Espresso Martini, that’s fine, I will gladly take your money and join you,” she says.

This inclusive atmosphere is important to her on a philosophical level, but also aligns with her hopes to build tangible, real-world connections between the bar world and the community at large. “The way we talk about hospitality… sometimes we don’t pay attention to how we make people feel seen or set the tone of a place. It’s important to make people feel good and engaged. To make them trust that you’re going to give them something good, and that you are trying your best to push everything forward in every way – not just in the cocktail programme, but through design and collaborations with local artists… there are so many ways you can work to make people feel comfortable.”

Veira does it all with a humility and friendliness that inspires others to get on board with the causes she champions. For example, she regularly hosts fundraisers at the bar using an approach she calls “casual benevolence”, where folks are encouraged to raise funds or donate in a way that lacks the typical self-congratulatory fanfare she has seen proliferate throughout the alcohol industry. “People always seem to want to do these elaborate tasting menus that actually generate quite little money and at those events people didn’t seem to want to talk about the charities, or when they did it would be in a very ‘aren’t we special’ way, so I’ve been very taken by the idea that you can just have an event that makes money without all the song and dance and crazy auctions and stuff, and it ends up being more profitable for the charity.” The model works: in total, she has raised over $100,000 for local women’s shelters and organisations that support LBGTQ+ rights to date. 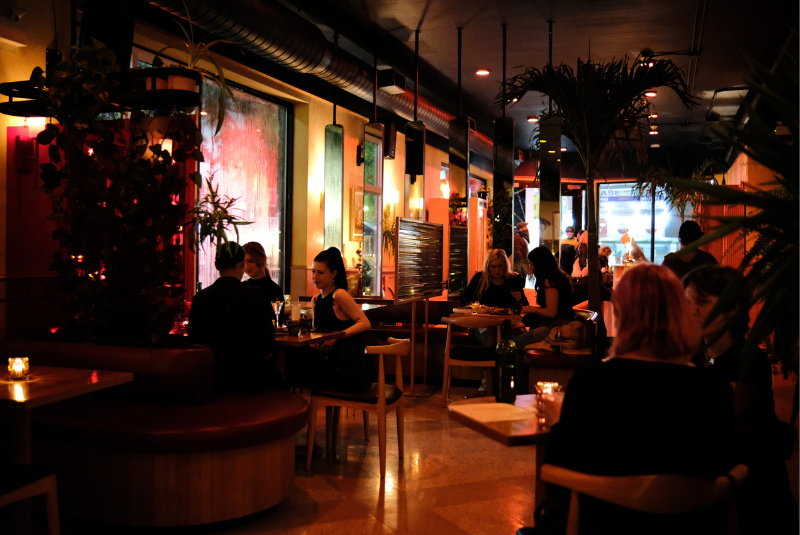 Bar Mordecai is located in the centre of Toronto, Canada

And as if it wasn’t all very impressive already, on the heels of the pandemic Veira is combining many of her skills and ventures into launching a school called Stave. When it opens this summer, the program will offer WSET certification, tastings for consumers and industry folks, and general hospitality training including first aid and de-escalation techniques.

The waves Veira has made in the industry are tangible, her career goals serious, but it all comes from a place of love for her community and her role as a connector within that space. When asked to reflect on the bigger picture, she recalls a moment in early 2020 when the pandemic had shut down the bar industry in Toronto and beyond. “I remember my mom was like, ‘well maybe it’s time to do something else,’ and I thought: ‘I don’t want to do anything else.’ I really do love this industry and while the last few years have given me an opportunity not to [love it], it didn’t happen,” she says. “Whether or not everything is perfect, there is something kind of perfect about truly going through some of the hardest times and realising that it’s still where you want to be.”

Catch up with the action and watch the highlights from North America’s 50 Best Bars 2022 here:

The first edition of North America’s 50 Best Bars, sponsored by Perrier, was announced at a live awards ceremony in New York on Tuesday 7th June 2022. Browse the website to discover the ranking and follow us on Facebook, Instagram, Twitter and YouTube to stay up to date with all the news and announcements.