Header images: Ruano and his scallop ceviche at Alcalde

Francisco ‘Paco’ Ruano is the chef and co-owner of Alcalde, newly announced as the winner of Latin America’s One To Watch Award, sponsored by Glenmorangie.

Over a celebratory dram of the single malt Scotch, the 33-year-old discusses his influences, his food and his home city of Guadalajara in western Mexico.

You’ve worked in some of the best restaurants in Europe and Mexico. Why come back to Guadalajara?

It’s where I’m from. I left when I was still a teenager and was away for more than a decade; back then there wasn’t much to keep me here. But I wanted to open a restaurant that spoke of who I am, so there was no other place to do it. I want to bring more exciting dining options to the city and to make Guadalajara a culinary destination in its own right – it’s not the sort of place that usually appears in tourist guides.

Where does the restaurant’s name come from?

It’s named after the original market in Guadalajara. It’s a celebration of our products. It’s also where we shopped when I was a kid. I was always very interested in the ritual of preparing meals, not just the cooking, but the trip to the market and all the arrangements.

So where did you learn to cook?

First from my mother and my grandmother, and at culinary school, but then I worked for Thierry Blouet [at Café des Artistes in Jalisco] who at the time was the best chef in Mexico. I worked on cruise chips around the world, then Mikel Alonso [of Biko] helped me to go to San Sebastian to study further. I ended up staying in Europe for three years, working at places like Mugaritz, Akelarre and El Celler de Can Roca. I also worked at Noma alongside Jorge Vallejo [of Quintonil], who is now one of my closest friends. These places showed me the dedication, passion and discipline required to be successful.

And you’ve brought that back to Alcalde?

Up to 90 per cent of my kitchen team are young guys straight out of cooking school. They lack experience, but I can mould them to have the right attitude and passion. I’m proud to be creating a new generation of local chefs who don’t have to go to Europe to train. 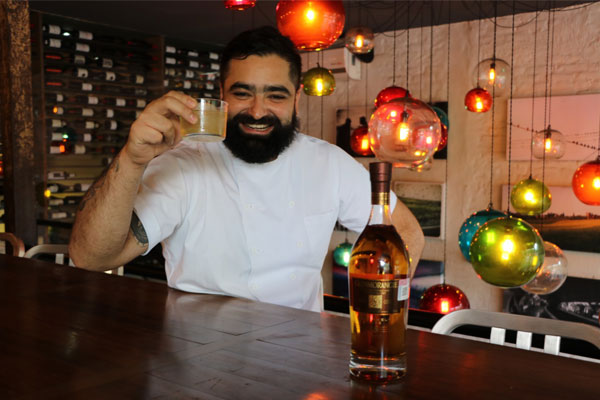 
Can you summarise your food for us?

The food is based on what I want to eat, with dishes that are full of flavour. The majority of dishes have a recognisable Guadalajaran basis. While there are some elements that bind Mexican food together, we also have a lot of products that are unique to the region and here we have a very specific way of cooking. Guadalajarans also have a particular taste for vinegar in their street food!

Pick out one dish from the menu…

The menus are always changing depending on the season and what’s available. We work with a guy who collects the best produce for us from all the local farmers, so it’s weekly harvest with surprise ingredients each time. But my favourite dish is piglet with pumpkin seed sauce. The original recipe comes from Puebla, but the sauce comes from my mother. It reminds me of home.

What does winning the One To Watch award mean for you and the restaurant?

I’m very grateful that our efforts have created an echo. It tells everyone involved that we’re heading in the right direction and sets us to work harder to make the 50 Best list itself. It will also help make people across Latin America be aware that there are good restaurants outside Mexico City.

The idea is to get better and better! At the restaurant, we are going to take 10 of the 60 seats out so we can give those diners an even better experience. And we’re going to open a restaurant serving traditional food of the region later in the year.

Chef Ruano will receive his award at the fourth annual Latin America’s 50 Best Restaurants 2016 in Mexico City on Monday 26th September. Follow the livestream and track the live countdown on Twitter, Instagram and Facebook.