French pastry specialist Dominique Ansel – who already owns a range of bakery outlets around the world – makes the move into full-service restaurants with the opening of 189 by Dominique Ansel in Los Angeles. We catch up with the chef in his new home.

Dominique Ansel slips onto a stool at the chef’s counter of his new Los Angeles restaurant, glazed with a mixture of elation and exhaustion. Earlier this month, the famously inventive pastry chef opened 189 by Dominique Ansel – his first full restaurant – upstairs from the first West Coast outpost of his bakery, which has had Angelenos lining up from day one. “They’ve been there since 6.30 this morning,” he says of the crowd waiting outside, and he would know. He’s been here since 4.

Ansel, of course, is known for fantastical confections such as Frozen S’mores, a chiffon cake so light it arrives floating in a balloon, and the famous Cronut, still a food fetish four years after Ansel invented it. Earlier this year, he was named The World’s Best Pastry Chef at The World’s 50 Best Restaurants awards in Melbourne, capping a career that has taken him from an apprenticeship in his native France, to opening international locations of Fauchon and heading the pastry department of Restaurant Daniel in New York City, before striking out on his own in 2011.

Ansel and his partner, Amy Ma, have been working on this foray into the savoury side of the kitchen for three years. As he did before opening his Tokyo and London bakeries, the chef started by sifting through the culture of the city itself – learning what people eat, how they live, what excites them. Ansel decided to open his 150-seat restaurant in the Grove, an open-air shopping centre in LA, after 700 people showed up for a pop-up he did there a few years ago. 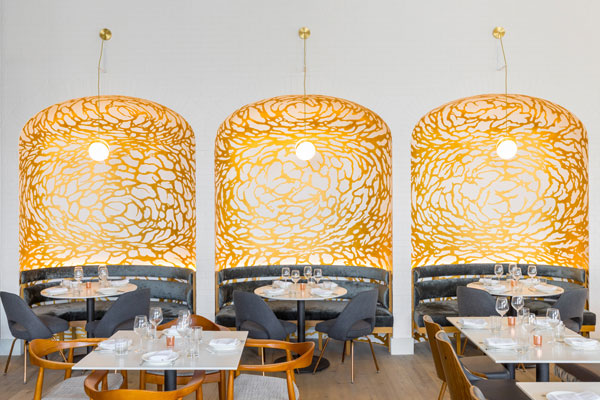 
The loft-like restaurant glimmers with touches such as gold marbling painted into the alcoves, a pattern inspired by the airy crumb of a croissant. In the open kitchen, executive chef Hyun Lee turns out a menu filled with Ansel’s trademark of emotional, evocative creativity. “In fine dining, there’s often a gap between dinner and dessert,” Ansel says. “The food throughout the meal will be very traditional, then the dessert comes and it will be very modern. Or it will be the other way around. There should be continuity.”

Order a Brown Derby cocktail, and you will be served what appears to be a whole, pristine grapefruit – but it has been infused with Eagle Rare Bourbon and will be juiced at the table. Dishes range from a comforting Spoon-Tender Cabbage Soup, a spin on French onion soup made with rye bread, rich pork broth, Gruyère and Fontina, to a whole rotisserie chicken, spice-brined and air-dried for two days, and served with black garlic rice stuffing and a shot of chicken jus on the site.

Ansel’s version of “clam chowder” – he hates dealing with the shells – involves clam-filled tortellini standing jauntily upright in a beautifully light, almond-milk broth with celery, pancetta and emerald streaks of parsley oil. Pull-apart milk bread is a play on elotes – the popular corn street snack – with a row of kernel-shaped buns served in a purple husk and filled with rich corn pudding, topped with crumbled cotija cheese and a lime wedge. 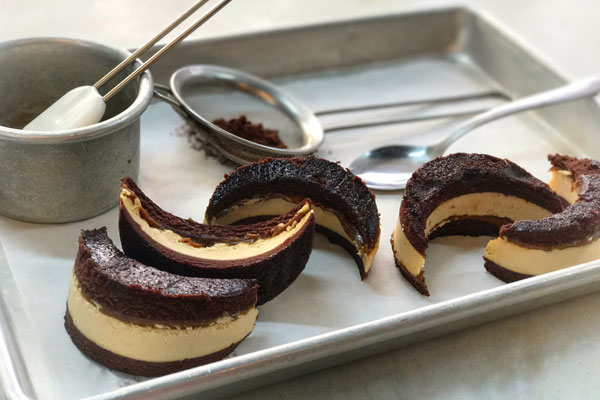 
The dessert menu pays homage to the fundamentals of baking. A dessert called Knife Skills is an array of apple preparations on a cutting board, from fine ribbons infused with lemon thyme to julienne meringues, while one called Trimmings arrives as a sheet pan holding crescents of tender chocolate cake layered with crisp peanut feuilletine and a creamy peanut filling, along with a pot of rum glaze and a sieve of cocoa powder.

The restaurant is also open for a dim sum-style weekend brunch, when waiters steering carts and carrying trays offer ultra-crunchy fried chicken, DIY lobster rolls, butternut squash pancakes, and plenty of pastry. Everything is served communally, so brunch will feel more like an event, Ma explains, as Ansel is pulled away by yet another fan who wants a quick snapshot. “There have been a lot of photographs, yes,” he says when he returns. “But if people are happy, I am happy.”