Drink Kong picked up the Campari One To Watch award at the ceremony in London for The World’s 50 Best Bars 2019. Its charismatic owner charts his journey to becoming one of the most exciting bartenders in the cocktail world


Some people claim to live and breathe their occupations. Others admit to being defined by their job. Many wax lyrical about being a slave to their art. Only a few can become the very definition of a brand. Patrick Pistolesi falls squarely into this fourth category.

His bar, Drink Kong, the winner of the Campari One To Watch 2019, is the manifestation of Pistolesi himself. A hirsute man with gregarious disposition and shoulders as broad as the Colosseum that throws shadow on his bar in southern Rome, Drink Kong is so named after Pistolesi’s resemblance to the engorged gorilla. 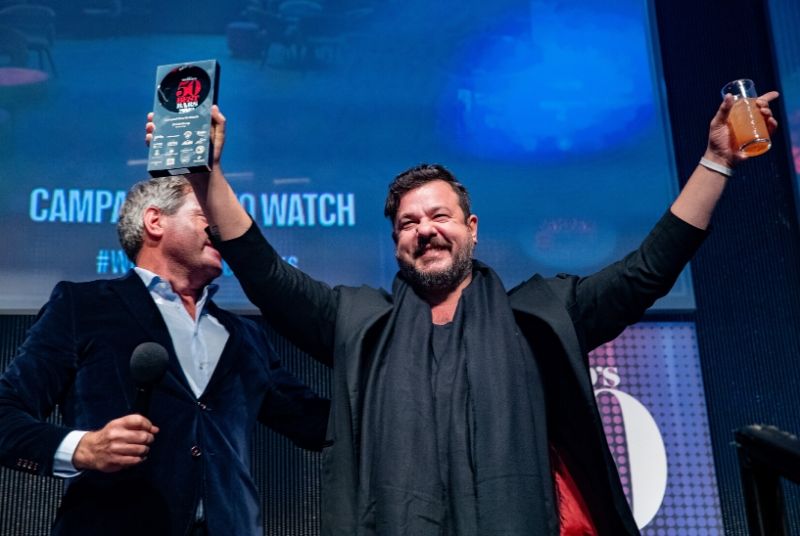 Pistolesi collects the Campari One To Watch award

His bar-side manner, however, is diametrically opposed to the sensibilities of a rampant primate. As his name alludes, he’s an Italian citizen of Irish heritage and he brings to the bar the very best of both nations’ propensity to entertain. Softly spoken, with an accent that annunciates long and drawn out vowels in the Irish style, coupled with the bouncy lyrical brogue of conversational Italian, it sounds almost as though he was custom-built for a life in hospitality, forever cossetted by the glow of a dimly illuminated back bar.

“Bartenders are the last aristocrats of the working class,” says Pistolesi, paraphrasing Tom Cruise in cult classic Cocktail. “We speak to everyone and we hear everything. From a beggar to the Queen, anyone can come into our bar. Ten minutes previously, the guest could have been the biggest high-flying lawyer in the city but right now, and for as long as he or she wants to stay, they are just plain old ‘Franco’.”

It’s this egalitarian philosophy that defines Pistolesi’s menu. He describes Drink Kong as Italy’s first ‘instinct bar’. To the uninitiated, this means that the guest is not immediately given a menu. They are asked about their mood and for a colour that might represent the way they are feeling. “We don’t give a menu as it might disrupt the guest,” explains Pistolesi. “We try to play with them. It’s kind of like an anthropological experiment based on symbols and new forms of communication. We’ve picked up on the fact that everyone communicates in symbols these days and our menu is just an extension of that. 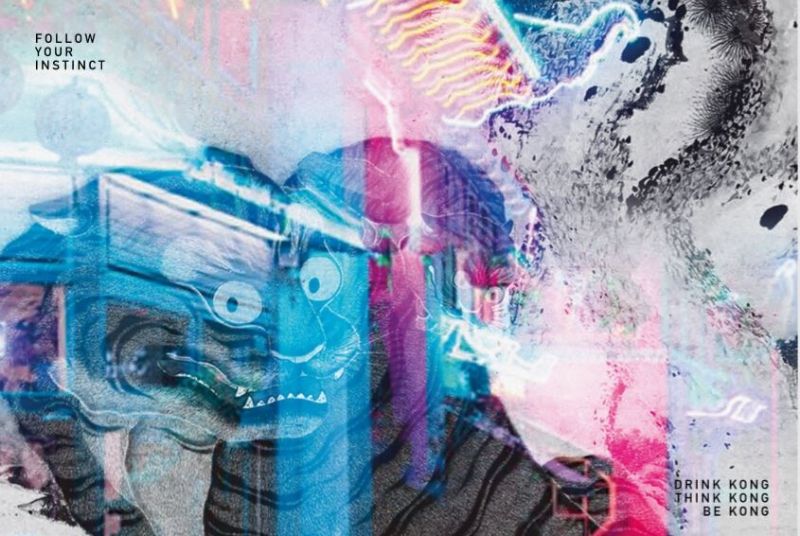 “Sure, we can make you a Martini or Manhattan, but we try to steer people towards expressing their mood in their drink choice. Most of our drinks are made pre-batch so we can devote more time to the customers and actually begin to understand them and what they like. If they want a Spritz, that’s absolutely fine, but when that is in their hand and they start to think about the next drink, that’s when I can go to work.” 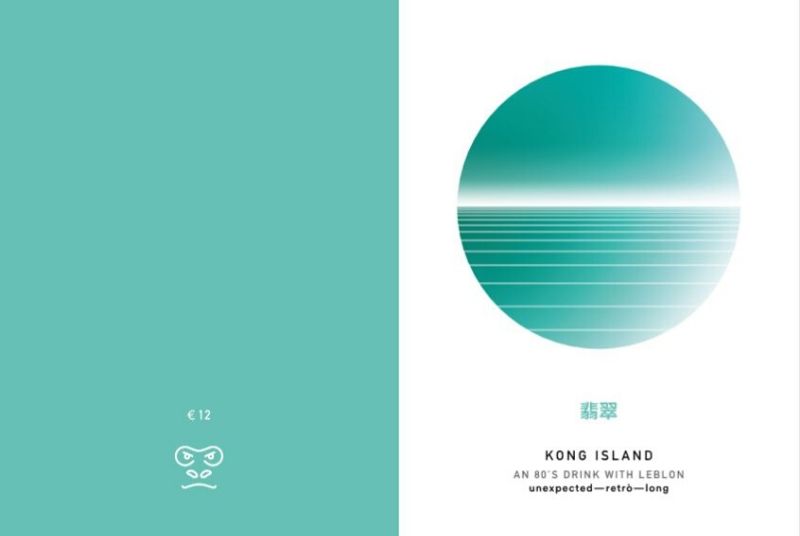 An example of how Drink Kong presents its drinks


Distilling local spirit
The native Romans, a famously conservative crowd, were the first that needed convincing. “Our first hurdle here was getting the Italians to trust us,” he says with a grin. “The locals are very set in their ways and extremely knowledgeable when it comes to flavour. Pretty much any guy in the street would be able to name you 20 varieties of tomato. They grow up with great cooking in their family, so they come to the bar with a deep understanding of flavour. What we are doing with our rotary evaporators and scientific drinks is still very new here, so we knew that it would take a while to win this trust and how the drinks actually taste would need to be at the heart of it.

“We make a crystal-clear Negroni and serve it in a coupette glass; we serve a clarified version of a Summer Cup produced from Chardonnay grapes. The human brain doesn’t like visual surprises such as these and Italian brains like surprises even less.” It was a risky strategy, but one that paid off handsomely. “When we started to develop a crew of regulars, it made me really happy. The thing is, these are just drinks – if you don’t like it, I’ll just chuck it away; it’s not like I’m asking you to run into fire. What I really wanted to create was a new experience for people to enjoy.”

The interior design of Drink Kong itself doesn’t fall into one distinct category. Flashes of neon abound among deep greys, shades of black and fastidiously arranged lighting that veer towards an Eighties arcade palette. One identifiable trope is Japanese, both in script on the walls and nods towards the artful bars of Ginza. 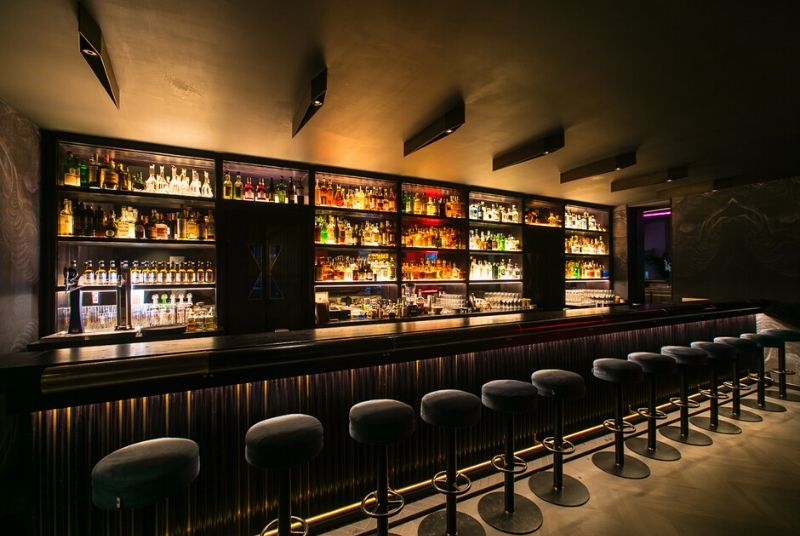 “I was an only child and my babysitter was the TV,” says Pistolesi. “I’d watch Japanese cartoons for hours and it was kind of like inception for me. It’s not like I could understand what was going on, but over time it gradually came back to me as I started to think about how my dream bar would look.” For viewers of a certain age familiar with the Samurai Pizza Cats or Bubblegum Crisis that found their way onto European TV sets, it’s easy to see how the flashing lights and strobes applied to the cartoons were burned into the retinas of a young Pistolesi.

Pluck of the Irish
To understand more about his bartending and style of hospitality, more clues can be drawn from Pistolesi’s time spent in Ireland. As a child, young Patrick’s mother would send him back to her hometown for the three-month Italian school summer break, as she could continued working as an English teacher to wealthy Italians.

Pistolesi’s maternal family home was in County Cork in south-east Ireland. “I used to absolute love my summers back there,” he reminisces. “As a kid it’s like heaven: you leave the house at 10am in the morning and come back at 10pm at night. There are no rules and you just make your own fun. I had the classic cheeky older cousin – you know, the one who has sex before you, gives you your first cigarette and gets served at the off-licence for everybody else.

“He took me to the pub for the first time and I still remember it to this day. We went in on one Saturday night and I was completely mesmerised. I looked up at the bartender and saw a conductor of an orchestra. He knew everyone’s drinks order without having to ask, he made sure that no one was waiting too long and took the cash and served the pints in one motion. From this moment, I knew what I wanted to be.”

From that experience in a backwater Irish pub as a teenager, Pistolesi set about realising his dream. Returning to Italy he needed to find work and lied about having zero bartending experience to get a summer job making cocktails at a festival in Rome. “I must have been drunk as I don’t know how I got the gig, but I knew damn sure I wasn’t going to make a mess of it. I didn’t sleep for two nights reading about how to make cocktails and learning the recipes. The first drink I ever made was a Piña Colada with Malibu, coconut syrup and pineapple. It was absolutely disgusting.

“I started to hang out and work in as many of the bars as a I could and over time, I got pretty good. I was lucky to work with some real masters and I trained very hard. Whenever I had a friend who was going abroad, I’d ask them to bring me a book about cocktails and drinks. I’d read them cover to cover and make notes all over them, but it didn’t feel like study, it was something I really enjoyed.”

Pistolesi’s talent and dedication started to make waves. Aged 25 he was already considered one of the best bartenders in the city and, being bilingual, was consistently advised to go to the States. “I started in Brooklyn and ran into a couple of big shots and got introduced to Dale DeGroff. I learned jiggering and all sorts of new skills. I hadn’t realised how far behind cocktail craft was in Italy, but I knew there would be an appetite for it if I was able to do it properly.” 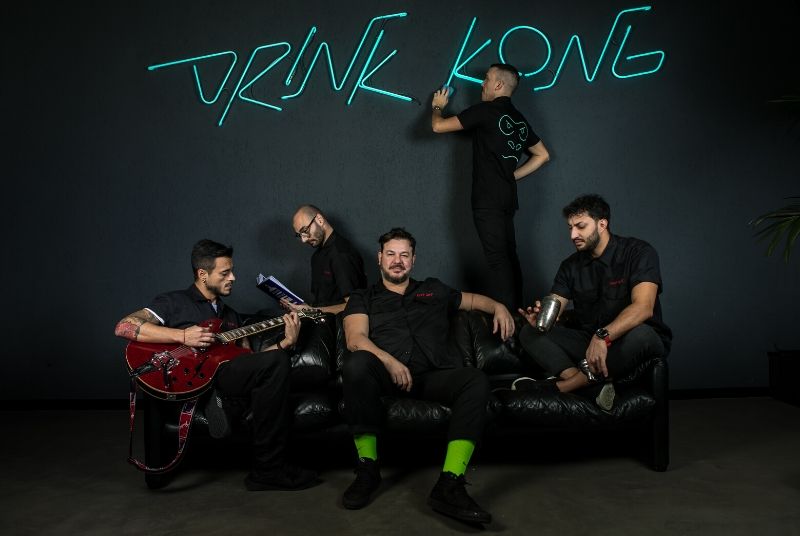 Pistolesi and the Drink Kong team

After two years in New York, Pistolesi was approached by the team behind Jerry Thomas Speakeasy, the Rome bar which sits at No.50 in The World’s 50 Best Bars 2019 list. “I decided to go back to Italy and do what I could,” he says with purpose. “There were six of us who were all about the same level in terms of our skills. We were kind of like our own human lab in terms of creativity; we were really passionate about changing things and turning Rome into a genuine destination for bars.

“Italy had a lot of tourist traps and this was a long time before Trip Advisor. The bar owners were of the opinion that these customers would only be coming through once, so to hell with what they thought of the experience. We wanted to radically change this way of thinking and give Rome a sense of pride in its bars and drinks craft.”

Pistolesi and his contemporaries went their separate ways and began to evolve the Rome bar scene, drink by drink. Locals and tourists alike lapped up the new style of hospitality and care given to the cocktails they were served. “It was brilliant to be a part of, though after a while nothing was really new. Everywhere was a bloody speakeasy, lots of people would get turned away, Prohibition-style music was everywhere and it became less exciting.”

Cue Drink Kong. July 2018 saw the opening of Pistolesi’s bar with 14 staff committed to changing the way the city looked at its drinks. Around 18 months after opening, it landed at No.82 in The World’s 50 Best Bars 2019 list, picking up the Campari One To Watch in the process. “It’s really been an amazing opening period for us. Winning this award has seen us get bookings from all over the world and has helped set us up as a destination bar worth travelling to.”

February 2020 will see the launch of Pistolesi’s next menu, New Humans, which promises to be the most forward-gazing yet. “With us, it’s all about the guest and the drinks – we are just the guys in the middle,” he says with heavy emphasis. “I’ve been doing this for 21 years and I like to talk. Come down, get to know me and I’ll guarantee you that I will make a bad day good.”

Now watch the highlights from The World's 50 Best Bars 2019: