How to build one of the most sustainable bars in the world, by Re’s creator Matt Whiley

At The World’s 50 Best Bars 2021, sponsored by Perrier, Sydney venue Re was honoured with the Ketel One Sustainable Bar Award – an accolade for the bar on the 50 Best list that demonstrates the highest commitment to the environment. Its creator, British cocktail pioneer Matt Whiley, tells us how he managed to create the world’s first permanent bar built on waste and gives you three simple things that you can do at home to help build a more sustainable future

Matt Whiley wants to tell the world that we’re thinking about waste all wrong. “Food waste isn’t mouldy stuff. It’s perfect produce that someone doesn’t want,” he starts emphatically. “There’s so much food that is overproduced and there isn’t enough demand for it. Or perhaps it doesn’t look quite right and it can’t be sold. There are so many factors why people won’t buy it.” With his bar Re in the South Everleigh precinct of Sydney, Australia, Whiley wants to change people’s perception of what ‘waste’ means. 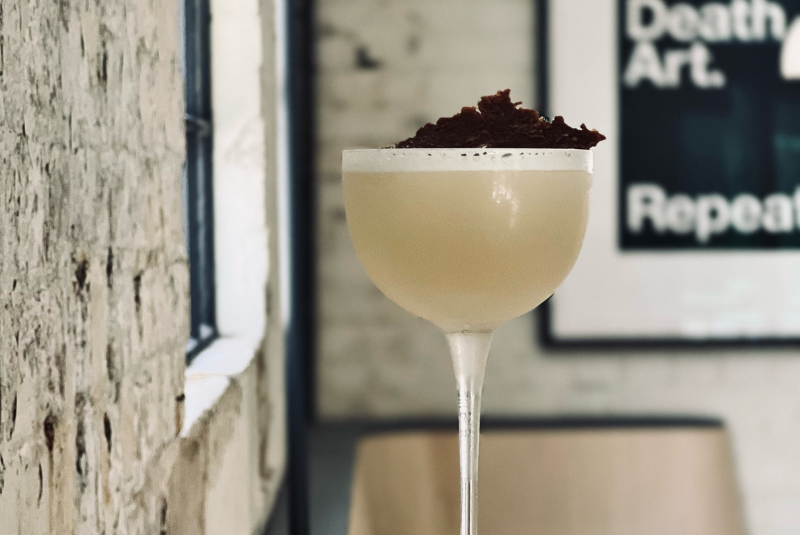 One of Re's signature cocktails, Brickfields, made with tequila blanco, fermented toasted sourdough syrup and lime

Opened in April 2021, Re has been sending shockwaves across the industry with its pioneering approach to sustainability. Its latest accolade, the Ketel One Sustainable Bar Award 2021, is proof that sustainability is more than just a trend – it can be a philosophy on which an award-winning, financially sustainable venue is built.

It starts with a strawberry
While working at his now-closed London bar Scout, Whiley noticed something surprising about his fruit and vegetable supplier. Scout was created to showcase seasonal British produce in creative cocktails, and one summer day Whiley spotted a small ‘C2’ mark next to some very cheap strawberries. “We thought that the strawberries probably weren’t very good, or that they came from a bad producer,” he recalls.

“But when we asked the supplier, he told us that it stood for Class 2 – ingredients that are overripe, don’t have the right shape or that for whatever reason will go into the bin if they aren’t bought. Since that day, we started always searching for C2 products.”

Whiley explains that for a bar business, overripe fruit means that it likely has a higher sugar content – resulting in tastier, sweeter drinks. Bars often blend or process fresh fruit anyway, so any visual defects were also irrelevant. Buying the C2 strawberries didn’t only make sense from a sustainability point of view – it also saved money.

In 2018, Whiley decamped to Australia to do a Scout pop-up in Sydney. It became so successful that it turned into a year-long residency and Whiley moved to the city permanently, getting involved in other projects and coming up with new ideas. Mainly, he fell in love with Australia’s incredible variety of ingredients and their accessibility, realising that the Scout concept lent itself perfectly to Sydney.

When the residency came to an end, he was offered the opportunity to check out a new space. It was a venue located in a former locomotive factory, a beautiful heritage building loaded with history and charming features. Whiley immediately fell in love with it. 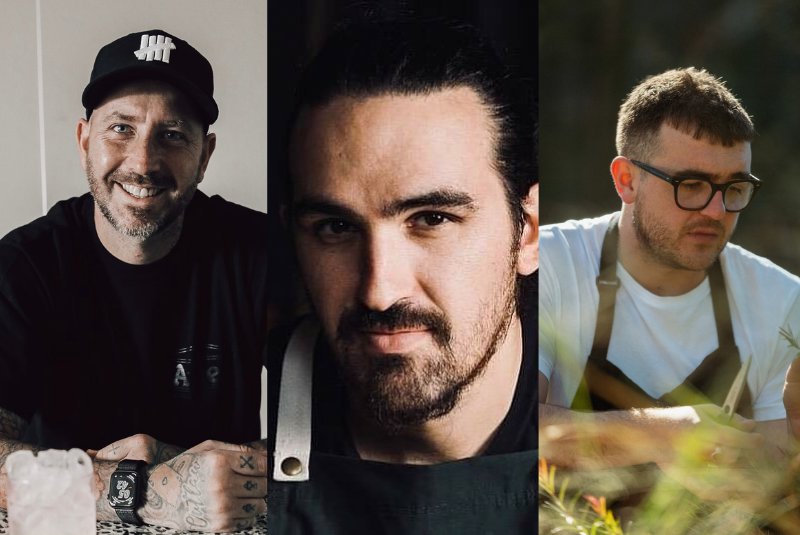 Re is run by Matt Wiley, Jake Down and Evan Stroeve

A new bar for a new era
When it opened in 2017, Scout was considered ground-breaking for its focus on hyper-seasonality. In 2021, Whiley knew that times had changed and wanted to take the concept further. He started with the venue itself, spending months in with his designer to find solutions to create a venue literally built on waste.

As a result, Re features a bar and tables created from milk bottles diverted from landfill. Some of the light fixtures are made from a material derived from mushrooms. The plant-based floor is mostly made from flaxseed oil and is fully compostable. The rubber that lines the steps to the top floor came from recycled car tyres. Even the painted skateboards that adorn the walls are the work of a London-based artist who collects abandoned boards from skate parks and turns them into pieces of art.

Whiley’s next step was to organise sourcing. He spoke to a friend who owned a wholesale fruit and vegetable company in Sydney and convinced him to introduce him to his producers. “I spoke to people at the market from whom I could potentially get produce, and they told me that yes, they had lots of surplus that was going to waste,” says Whiley. “But then I told them: I don’t want it for free.”

For Whiley, this is as crucial as it is counter intuitive. “I don’t believe that a guy who spent months growing something should give it up for free. I don’t believe I should benefit from it at his expense. He has to get paid for something that he would normally put in the bin. If you don’t give him compensation, that just makes it easier for him to throw it away. Everyone has to benefit along the way – that’s the only way it can work,” he states.

There were lessons that had to be learned the hard way. A few days before Re’s proposed opening date, the first food waste delivery was scheduled. “The producer sent us a very vague picture on WhatsApp. There were apricots, strawberries, a couple of melons and some plantains. We said we’d take it all, thinking that it was just what was in the photo. Instead, they gave us all the waste they had in their factory,” he recalls, laughing.

The food waste – trays and pallets of fruit and vegetables that would otherwise have been destined for landfill – filled the bar from the entrance to the wall. It delayed Re’s opening by eight days while the team found solutions for how to store all the ingredients and how to use them in cocktails. “It taught us that communication is the most important thing,” reflects Whiley. “Without it, everything breaks down.”

Cocktails with a difference
Since Re’s opening in April 2021, the bar has developed much more sophisticated ways of sourcing the by-products and food waste that form the basis of their drinks list. These days, most of the produce the team uses comes from other local hospitality venues.

From hyper-creative ice cream store Messina Gelato, for instance, Whiley and his team pick up the strawberry tops and leaves that can’t be used for making ice cream, the pandan fruit pulp that is created as a by-product of making pandan sorbet, and the chocolate scraps and waste that come out of the chocolate tempering machine. The three ingredients go into a tequila-based cocktail named after the store itself: the Messina. 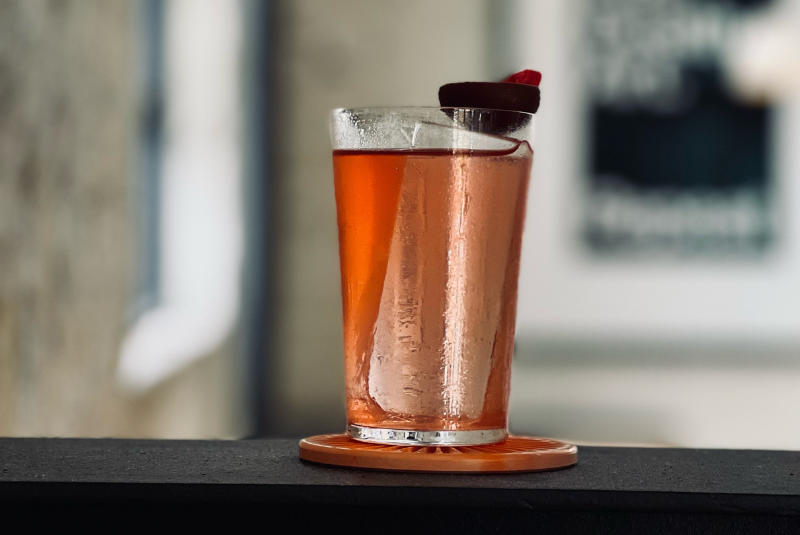 From local brewery Yulli’s the team receive spent beer grains, a by-product of the beer production process. The grains are dried out and made into flour, which is then distilled with vodka and chocolate, giving the spirit a bready, chocolaty flavour not unlike that of genever. The Yulli’s cocktail features spiced spent grain Ketel One Vodka, apple, mulberry wine, pumpkin trim and black walnut.

For Whiley, the process of sourcing food waste from other businesses has been so successful that he now considers it the only way forward. He’s distilling everything he’s learnt at Re into a new project called Never Wasted, which he aims to launch in 2022.

“We’re trying to create a platform for hospitality venues to communicate their waste,” he explains. “For instance, if there’s a certain thing you know you’ll be throwing away, you would add it into the system with a geolocation. The system would alert all the venues with a certain radius, so that they could claim it if they want it. And longer term, we’re trying to create a marketplace for waste. We’d collect all the food waste into a warehouse and then, for a delivery fee based on the weight of the product, we would deliver it to venues that want it. The venue wouldn’t have to pay for the product itself – just the delivery fee.

“Essentially, we’re trying to create a kind of concentric circle economy. Not a circle economy, because it’s not all going around the same way, but rather going in concentric circles in hundreds of different directions. We have a logo that we ask people to use next to any drink or product made with diverted food waste. We hope to launch early next year with about 10 bars in a small area, and then go bigger.”

Despite being a young venue in an up-and-coming Sydney neighbourhood, Re is laying the foundations for a revolution in the industry. “It’s all about looking at what you’re doing, analysing and finding ways to improve,” says Whiley. “Change is happening, but it needs to be faster. Food waste globally is huge. We want people to understand that waste can actually be delicious.”

Whiley’s tips to reduce your own waste
1. Be conscious of how much food you buy. We’re all guilty of buying too much food. Don’t buy ingredients if you don’t have a plan for how to use them. Before putting something in the bin, ask yourself: ‘have I exhausted every avenue of the shelf life of what I’m about to throw away?’
2. Consider composting. Composting is a super beneficial way to dispose of food waste while giving back to the earth. Speak to your neighbours about finding ways to compost collectively, then give the compost to your local gardeners if you can’t use it yourself.
3. Track your waste. Put a notepad next to your bin and write down everything you’re putting in. It will make you more conscious of what you’re wasting and help you find ways to improve.