Argentinian bartender and bar owner Renato ‘Tato’ Giovannoni, founder of Florería Atlántico in Buenos Aires, has just been named the Altos Bartenders’ Bartender 2020. He meets 50 Best to talk about the career crossroads that saw him choose a life tending bar and how Argentine drinks craft rediscovered the global stage after years in the cold

Renato Giovannoni is the embodiment of the modern international bartender. In 2019, he spent roughly 40 weeks abroad, travelling between pop-ups, guest shifts and masterclasses, taking his brand of drinks craft to five continents. Covid-19 enforced a hiatus in his globetrotting and marked a welcome break: “In December 2019 I was coming through LAX Airport taking my usual route home to get back to South America,” says Giovannoni. “A guy at the airport actually stopped me and confirmed what I’d been thinking. ‘You look tired, man,’ he told me. I took a look in the mirror and I couldn’t deny what he said. I told myself then that I needed to slow down. The pandemic has given me a lot of time to think and reflect.”

Watch as Giovannoni takes you on a tour of his hometown:

This period of recalibration for Giovannoni came at the same time as all lead bartenders from The World’s 50 Best Bars 2020 list – which will be announced on 5th November – were asked to name the one person who has done more to further the art of bartending than any other in the preceding 12 months. As the only peer-voted award in the ceremony, many say it is the drinks industry’s ultimate accolade. “When I found out I was named the Altos Bartenders’ Bartender 2020, I really couldn’t believe it,” says Giovannoni. “I know that I have many friends all over the world who respect what I do, but to have them say my name in the voting was one of the best experiences in my life. I just hope I am ready to do the industry proud.”

Ready? You could argue he was born ready. Or, at least has been preparing since childhood. “I first started working behind the bar aged 12 in one of my dad’s restaurants,” he says. Giovannoni’s father ran a string of successful hospitality businesses in the Argentine coastal town of Pinamar, 300 miles south of Buenos Aires. “Growing up in the business just felt so natural. I used to love the way the other employees used to make me feel special as a boy coming into the restaurants. I’ve now grown up with these people and the relationships are still there. It’s great to be able to watch my son in this environment, too.”

Milo, Giovannoni’s son with his wife and business partner Aline Vargas, has just celebrated his 12th birthday. Would he be happy with him following in his father’s footsteps? “Of course,” Giovannoni responds without hesitation. “If that is what he wants, I will take him with me. He would learn to start from scratch and not grow up thinking he is just the son of the owner. I will teach him the good things that my father taught me, but less of the bad. For example, I will probably pay him.

“In the last year working with my father, we had a big argument. One of his managers mentioned that I had been on the payroll for years. It was news to me; I’d never received a cent – apparently it was a good salary, too. When I asked my father about it, he said it was all going towards my university fees, which I suppose I couldn’t argue with too much.” 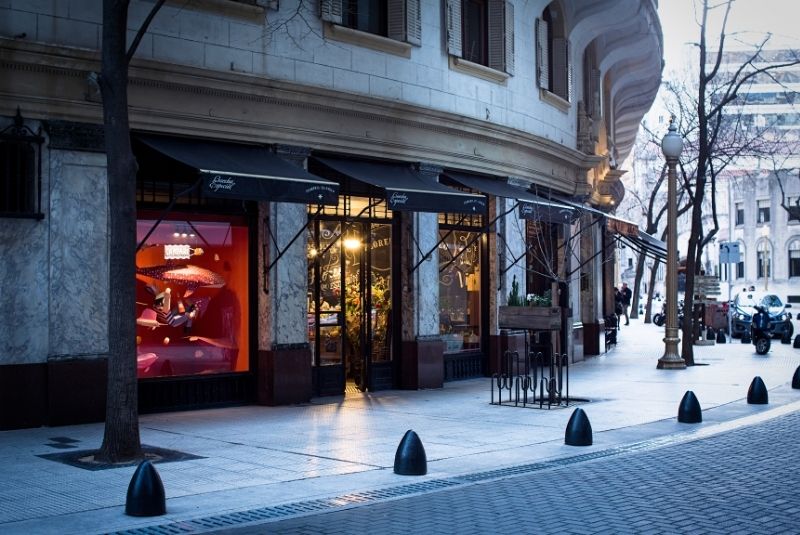 A three-fold path
Education was important to the Giovannoni family. Renato headed to Buenos Aires to study graphic design and art direction at Escuelita de Creativos aged 18, before taking a degree course in filmmaking at New York Film Academy. This course took him across the States – New York, Boston, LA – which first whet his appetite for travel, something ingrained in the family’s blood.

“I loved Los Angeles,” says Giovannoni. “I was an intensive three-month course and we were studying film, writing scripts, recording on 16mm film from 9am until 9pm. I was in my element. Once the course had finished, I was offered a job to work on a film in LA. I returned home to tell my family the good news, but I quickly realised it wasn’t going to be possible.

“When I got back to Pinamar I saw my father was very depressed. He and my mother had recently separated and he was not coping with it well. So that was my decision made, really. From that point I decided that I would put all of my energy into hospitality.”

This marked the key crossroads for Giovannoni. He had the option of managing the family nightclubs, running front of house in the restaurants, working in the kitchen or – the less-trodden path – behind the bar. “All through my studies I was in kitchens cooking, working the floor in restaurants and I had shifts behind the bar in nightclubs,” he says. “What really interested me was flavour. I was very lucky that one of the first head bartenders I worked with was a former chef. He taught me about flavour profiles – acid, salt, sweetness – and I quickly realised that cocktail making is just like cooking, but simply playing with liquids, not solids. I also loved the guest contact you get with bartending; as a chef, you just don’t have the same interaction.” 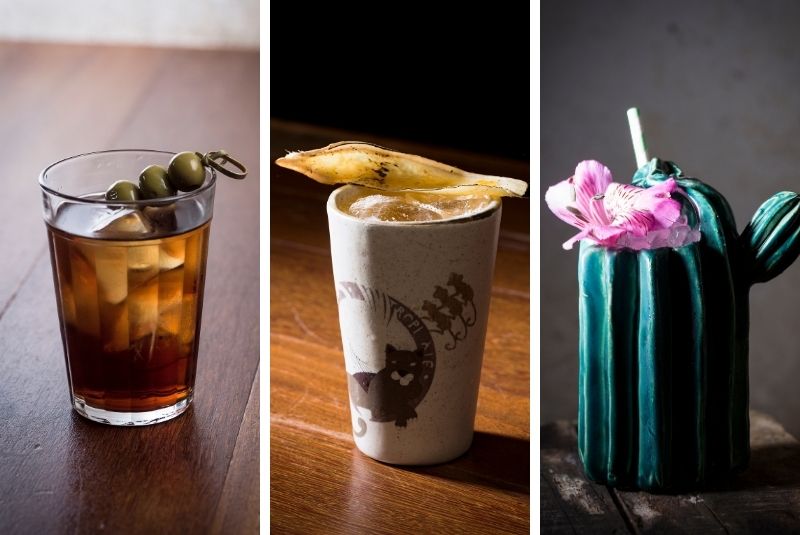 Three of the most popular cocktails on Florería Atlántico's current menu

Word quickly got out that the prodigal Giovannoni had returned and was looking for work. Sucre, a vast Buenos Aires restaurant and bar still trading today, had just opened and offered him a job. “It was a very good school for me,” he says. “There was something special about Sucre for me as it had a big open kitchen and a huge bar – there was no barrier between food and drink and that really appealed. It was actually speaking to the chefs here that got me really excited; one day a guy suggested to me that we make a Bloody Mary with grilled tomatoes. It became an iconic drink for us at Sucre and I think it’s still on the menu today.”

Forgotten spirit
It was around this time that Giovannoni started to study Argentina’s liquid history. Through the late 19th and early 20th century, Buenos Aires was one of the most cosmopolitan cities in the world. The city’s docks saw over one million immigrants from both Spain and Italy, with more than 100,000 arriving from Poland, France, Britain and Russia. Between 1895 and 1914, Buenos Aires’ population grew from 4 to 7.9 million.

These travelers brought with them a thirst. Gin came from England, sherry from Spain, vermouth and amaro from Italy and vodka from Poland. And with the people arrived the traditions of production. It created a melting pot of wonderful-yet-agricultural liquids, established by these settlers and extrapolated across Argentina. In his bar Florería Atlántico, Giovannoni celebrates this heritage, paying homage to the settlers who arrived on transatlantic journeys, landing at Buenos Aires’ Puerto Madero docks.

“Through the 1940s, ‘50s and ‘60s, Buenos Aires was one of the best cities in the world for cocktails and good drinking,” explains Giovannoni. “We had some of the best bartenders in the world, winning global bartending championships until about 1965, when we so nearly lost all of that history. This is why I tell young bartenders to read, read, read about the great talents that have gone before them.”

1962 in Argentina saw a military coup where General Juan Carlos Onganía Carballo assumed dictatorship and began a social campaign against ‘immoralism’. Long hair on men was outlawed, universities were taken under state control and miniskirts were banned on women. This also put huge restrictions on the country’s drinking culture and bar life, whose impact was felt right up until the 1980s.

“We are the second-greatest receiver of immigrants in the world’s history and I myself am fifth generation Italian. With Florería Atlántico I try to remind people of this great heritage, with people coming across the Atlantic to live here.” Indeed, a certain seafaring quality is never far from the drinks list at Florería. Giovannoni’s signature Balestrini Negroni is made with smoked seawater from his hometown, the staff wear maritime uniforms and murals of sea creatures drawn by Giovannoni’s hand emblazon the walls. 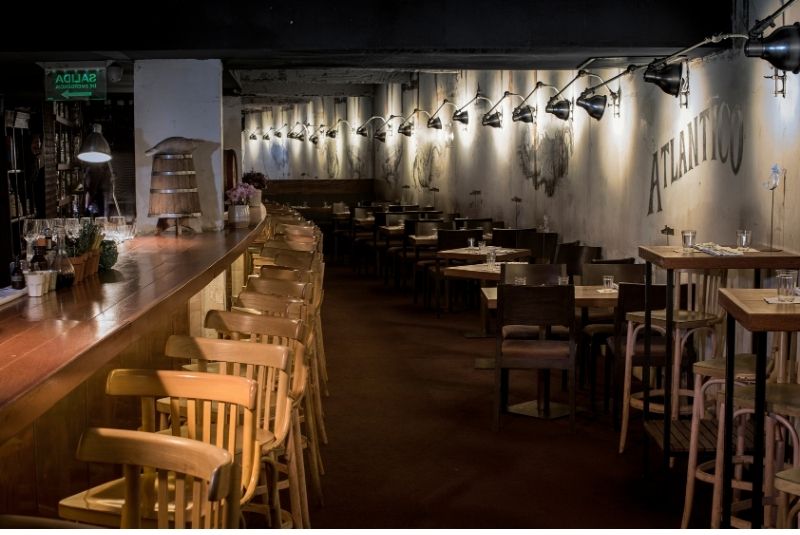 The traveling spirit lives on in Giovannoni. While he may currently be grounded by the pandemic, his journey is only on pause: “When I go to different places, I try to learn from other bartenders and discover new ingredients all the time,” says Giovannoni. “It might be something as small as looking at how someone holds the mixing spoon, but from every trip I take, I try to pick up at least two or three things that will make me a better bartender.”

A life of learning, discovery and selling the spirit of Buenos Aires to the world. Renato Giovannoni is a worthy recipient of the Altos Bartenders’ Bartender Award 2020. 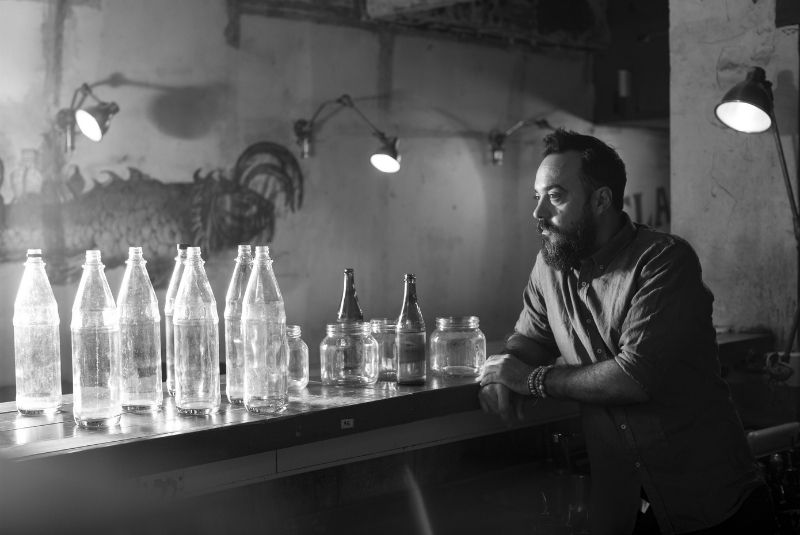 The World’s 50 Best Bars virtual ceremony will be open for all to watch. Please join us on 5th November on our Facebook and YouTube channels at 3pm UK time, where we will be streaming the event live to the world.