Getting high from a new supply: a revolutionary flavour extraction method for cocktails is being pioneered in South Africa

In Cape Town, two men have made a breakthrough in unlocking new flavour in cocktails. One, Kurt Schlechter, is a leading bar owner, and the other, Quintin van Kerken, is a man who makes a legal living by optimising THC extraction from cannabis in South Africa, where personal consumption is decriminalised. Together, they are bringing the ‘dab’ technique to bars for the first time and with it, a whole new world of taste

If we subscribe to Mark Twain’s musings in his autobiography, there is no such thing as a new idea – we simply tweak existing concepts. Although as a counter-argument, a trio of professors studying innovation recently suggested in a research paper positing that the best ideas often come from outside your industry, using borrowed insights.

In the bar world, we only have to look at techniques such as fat-washing to know this to be true. Don Lee of PDT in New York, who invented the process, says he was inspired by the restaurant trade, where chefs were using rendered bacon fat to add flavour to other ingredients.

Using fat as a vehicle for flavour and aroma is in itself old news, harking back to the essential-oil industry of ancient India, Persia and Egypt. The technique features in the modern-day perfume trade too, by the name of ‘enfleurage’, a method that uses odourless fats to capture the fragrant compounds exuded by plants.

In August this year, Kurt Schlechter, owner-bartender at Cause Effect Cocktail Kitchen, experienced a lightbulb moment of his own when looking to another industry. Schlechter – whose venue is currently No.75 in The World’s 50 Best Bars extended list – is no stranger to cocktail innovation, and is famed for his experiential serves. 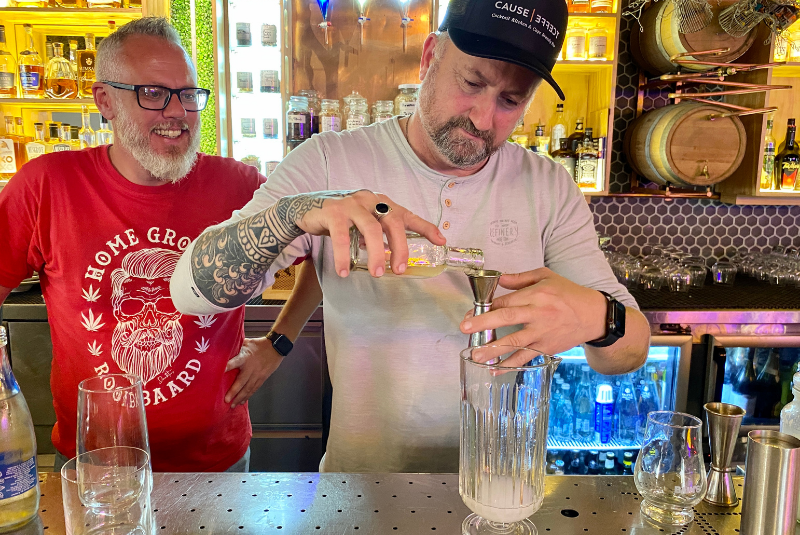 Usually, for inspiration, he turns to the oceans, mountains, fynbos [shrubland] and vineyards of Cape Town, South Africa, where his bar is located. This time, however, Schlechter’s muse came in the form of marijuana, following a happy meeting with Quintin van Kerken, a weed activist and trendsetter who contributed to the plant’s decriminalised status in South Africa, whereby adults are permitted to cultivate, possess and consume it privately.

Their introduction was arranged by a mutual friend, who saw the potential for creative collaboration between the two pioneers. “One of [Schlechter’s] associates said, ‘Hey, these two guys have got to be in the same room together’ … for some reason, he didn’t quite know what for,” explains Van Kerken.

What ensued was a veritable bromance. “Since I met Quin three days ago, we basically haven’t left each other’s sides,” admits Schlechter. “A flame was ignited, and this synergy happened,” agrees van Kerken.

The pair got talking about their vocations; Schlechter explained the various methods of flavour extraction they employ at Cause Effect, from rotovapping to creating bitters and other infusions, while Van Kerken shared his experiments with cannabis-oil concentrates.

Among others, Van Kerken outlined the dab technique, whereby cannabinoids and terpenes – the compounds responsible for the effects of cannabis as well as its colour, aroma and flavour – are extracted using solvents like butane or carbon dioxide. The result is a sticky wax- or butter-like concentrate that’s heated up and inhaled.

Extracting excellence
Manual techniques for cannabis-oil extraction have been around since 1000CE, when hashish emerged out of Persia, while solvents have been utilised since the 1970s, when enthusiasts began experimenting with butane hash oils (BHOs) in hidden labs around the globe.

As cannabis became decriminalised and later legalised in parts of the US, dabs gained popularity. Like alcohol, BHOs can be toxic if not produced correctly, so hash-oil extraction licenses soon followed.

One attraction of dabbing is that it eliminates the need for smoking, while another is its strength: normal marijuana contains around 20% tetrahydrocannabinol (or THC, the active ingredient that elicits a high), whereas dabs can reach 80% or more.

When reflecting just how strong dabs can be, Schlechter – who had an experience that caused him to stop mixing drinks mid-shift – had the stroke of genius of adapting the method to his work, in what would be a first for the bar industry. “I thought about taking the marijuana dab technique, where hydrocarbons and fatty oils are extracted from weed using butane, and using it to extract flavours from botanicals for cocktails,” he shares. 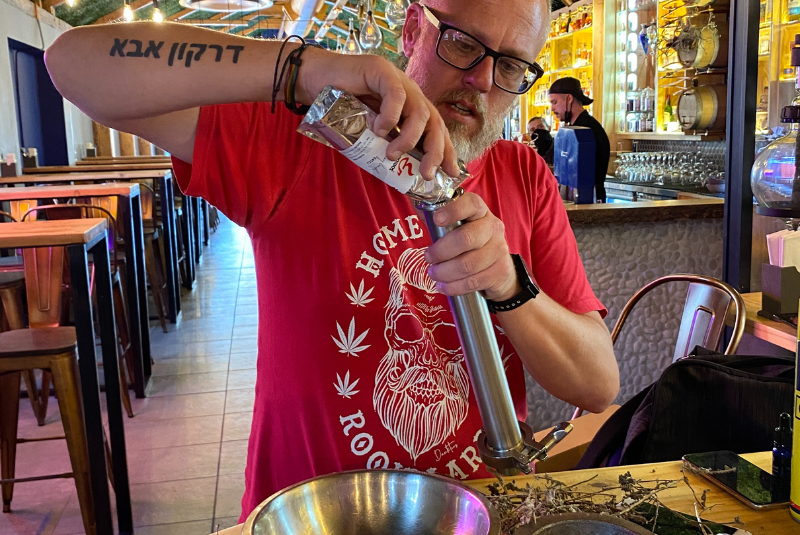 Van Kerken loved the idea, and the two started playing around, the dab expert carefully teaching the drinkslinger the proper protocols to ensure a safe end product. After some trial and error they came right, creating botanical dabs from camomile, buchu, naartjie and impepho rose.

Schlechter wasted no time in mixing up drinks with the concentrates and was delighted with the results. “One of our favourite methods to extract flavours at Cause Effect is using 96% alcohol, but we get a whole new burst of flavour this way. If you use the same ingredients, you’ll get a more floral, more perfumy experience with this extraction,” he enthuses.

“It gives a really powerful flavour profile of whatever you extract, as well as an incredible mouthfeel,” he continues. Schlechter’s dab technique now joins other industry firsts, like Camper English’s directional freezing and Iain McPherson’s switching, and of course Don Lee’s fat-washing, now seen employed in hostelries all over the globe.

Crucially, while it borrows from the cannabis trade, the method in no way uses the plant, so there’s nothing stopping bartenders from applying it in countries where cannabis remains illegal. Though remember: always pass the dab from the left-hand side.

Schlechter shared the below recipe, so you can try it for yourself.

To make the dab tincture

Before you get started, make sure you’re in well ventilated area. Be careful not to breathe in the butane gas at any point, and – because it’s highly flammable – keep it well away from naked flames.

2. Place the zests into an extraction tube, then pack the rest of the space tightly with freshly torn mint and organic Rooibos tea leaves until it’s full, with no air pockets.

3. Fasten the screen to the bottom of the tube, and hold it over a bowl.

4. Insert the nozzle of a butane canister into the top end of the tube.

5. Push the nozzle and allow the butane to flow through the tube.

6. After about a minute, a greenish-golden liquid will begin to drip out the bottom end of the tube – collect this in the bowl.

8. Allow the liquid butane to evaporate out of the botanical oils; in hotter climates, this will happen spontaneously, but if need be put the medium Pyrex bowl into a larger Pyrex bowl that’s full of hot water in a bain-marie-style method. You’ll know the butane is evaporating when the liquid bubbles (be careful not to breathe this in).

9. The butane will evaporate in 15–20 minutes; the bubbling will stop, leaving behind a reduced greenish-golden liquid. As an optional extra safety step, you can place the bowl of oil on a gentle heating pad for an hour or so.

10. Finally, mix the botanical dab with 40ml alcohol to create a tincture, enough for 4 drinks.

To make the drink

1. Add ingredients to a mixing glass and stir over ice.

2. Strain into a tumbler over a large cube of ice and serve. 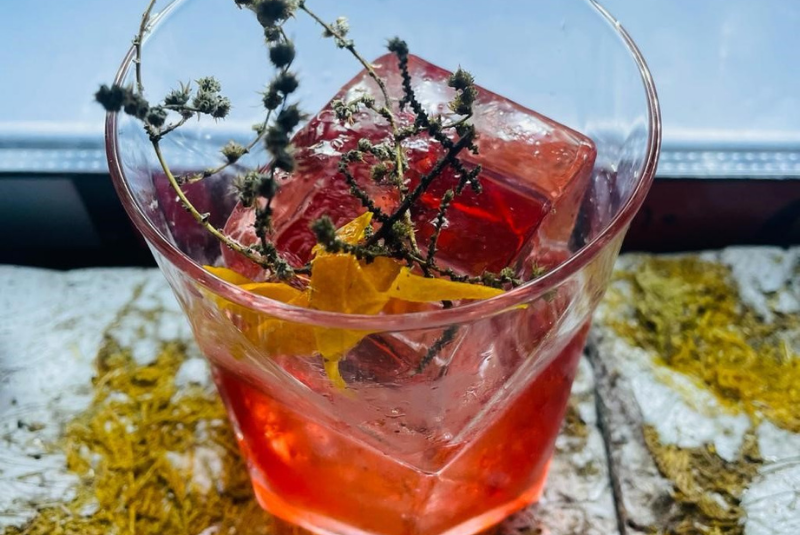