The secrets to designing a world-beating new bar, by Erik Lorincz

Slovakian bartender Erik Lorincz is one of the best-travelled and most experienced purveyors of cocktail craft on the planet. In February 2019 he brought 20 years of learning, practice and inspiration together for the opening of Kwānt in London’s Mayfair, following seven years as head bartender at American Bar in The Savoy hotel. In November 2020, Kwānt received the London Essence Best New Opening Award as part of The World’s 50 Best Bars virtual ceremony, reaching the No.6 position in the annual ranking. Here’s how Lorincz did it, from conception to build and drink design, told in his own words…

It felt very surreal, but also very real, if that makes sense? It was just great to be able to give the team something to celebrate after all their hard work and the confusion with lockdowns here in the UK. I’ve been trying to keep their brains busy, but for creative and active people, being locked at home is very difficult. This award shows them that we are on the right path.

I was never expecting to land in the top 10 – I call it the ‘magic circle’. While the virtual ceremony was being announced, I was watching the show with Angelo [Sparvoli, a Kwānt bartender]. When the countdown got to No.47 he turned to look at me and said we could class it as a successful year, as we will have jumped one place from last year. Then it went through the 30s, 20s and got into the teens. When it got to 15, I was grabbing onto my chair and holding my breath. I couldn’t believe it when we were announced as No.6. We were just happy to be on the list.

Watch this video and allow Lorincz to give you a personal tour of his bar:

After spending seven years at The Savoy [Lorincz was the 10th head bartender at American Bar and oversaw its rise to be named The World’s Best Bar in 2017], I was done with themed cocktail lists. We would have one themed list per year at American Bar and I would have to come up with drinks that worked under that idea. I found myself over-complicating them and occasionally having to sacrifice exactly what I wanted to create in order to ensure I was working within that theme.

So at Kwānt I’m doing it the other way around: everything is about the drinks first. We can have a theme to each drink and a theme to the ingredients, but each cocktail is treated independently. I have designed the menu so that you start at the top with some lighter drinks, then work your way down to more spirit-forward. It’s a bit like a menu at a restaurant, with the starters at the top and things to end your experience at the bottom.

We are just putting the finishing touches to our new list, which will be only the second menu since we opened. I have not changed the new menu completely, but I’ll be gradually removing and adding drinks as time goes on. It’s very hard to tell someone who has travelled to the bar to try a drink that they have seen or read about that it’s no longer available, so I’ll try to keep as much on the list as I can.

I’m a massive admirer of glass craft. I appreciate designs that are minimalistic and allow the drink to do the talking. It can look simple, but there is a lot to get right when it comes to selecting glasses in terms of the way they feel in your hand and look on the table. The garnishes I use – generally grown in my Evergrow – are very small and subtle, so it is important they are not overpowered by the glass. I like thin lines and clean shapes. If you pick the right glass, the drink is pushed forward and stands out on its own. 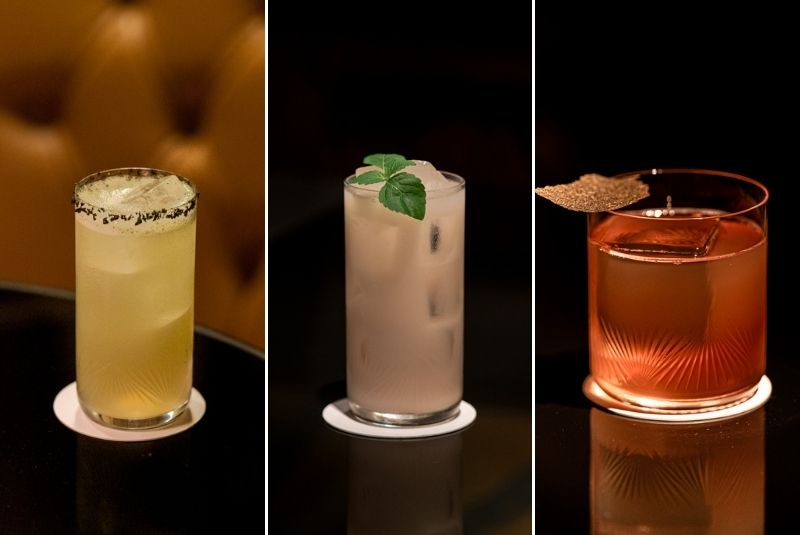 I used to come to Momo’s for a tea before a shift at American Bar because it felt so authentically like Morocco, a place that I love [Kwānt sits beneath north African restaurant Momo, in a space that previously housed a bar called Black Dice and more recently Kemia Bar]. I had no idea that this space was beneath it and when Mourad [Mazouz, Momo’s owner] showed me around and said it was available, it was kind of a no-brainer.

Walking downstairs for the first time, the first thing that came into my mind was the movie Casablanca. I have been travelling working in different bars around the world for a long time now, so I’ve been picking up bits of information on how I would want to design my own bar when the time came. I’ve always been a big fan of Art Deco and Colonial architectural style, so when I was going through the mood boards with our designer, a lot of the design tropes focussed on this. I thought these kinds of ideas would show good synergy with the Moroccan vibe upstairs and Mourad agreed. That ‘Colonial’ feel needs to be very sensitive though, so while there are hints towards it, you definitely wouldn’t call it a perfect example of the architype.

Texture is very important to me. I hand-picked the leathers, the prints, the bamboo, the materials for the back bar, but one of the best things is the carpet. We had a lot of discussion as to whether to go with a hard floor or carpet. There are positives and negatives to both: hard floor is easier to clean, but it isn’t good for acoustics. The designer suggested that we put in a carpet that looks like a wooden floor and I loved it – it’s one of the many tricks that the bar plays with you that helps to make it so engaging. 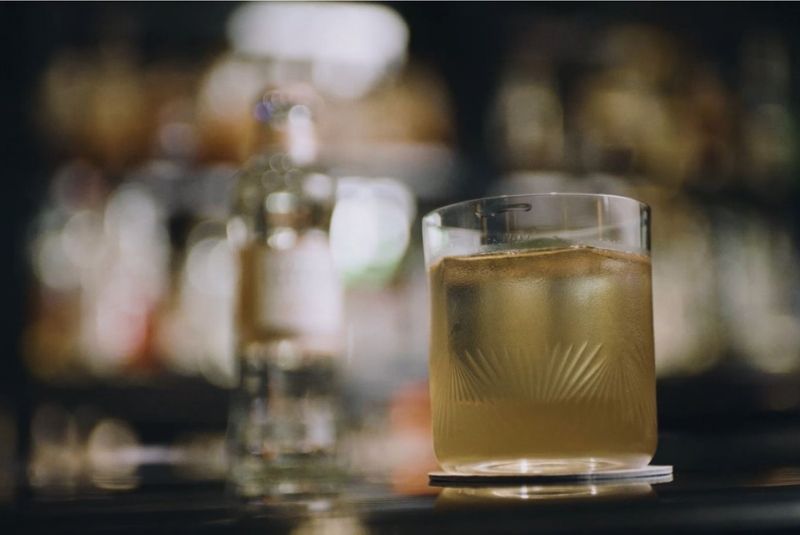 I left American Bar in May 2018 and we were planning to open here in the September. Mourad was refurbishing Momo at the same time and doing it to the same specification as he did when he opened 23 years ago, but with a few subtle changes. It was an extensive job and the build overran. We had stripped everything downstairs back to the pipes and cables, which all needed redoing. It all meant it took much longer than expected, which gave me the opportunity to spend the best part of a year travelling the world, doing guests shifts and picking up inspiration. It was the first time I was having conversations with bar owners all over the world as an operator – I found myself looking at everything in a very different light. It came at the right time and was like a Spring Break for me.

Hard to find, but not a speakeasy

There’s been a bar here for 23 years, so it’s not a secret. Observing that point, I decided not to put a sign up. Because there isn’t a sign and because it’s a little hidden beneath the restaurant, some journalists have called it a ‘speakeasy’, but I dispute that. Because if you are a proper speakeasy, you should need a password to enter and you shouldn’t be able to find it on Google. For Kwānt, you don’t need a reservation and you can find us on Maps. It might be a little bit tricky to locate us exactly, but that’s half the fun. Once you find it, it’s very difficult to leave.

I wore the white jacket at The Savoy for a long time and it still means a lot to me. When you look at old pictures of bartenders like Harry Craddock, a bartender wearing a white jacket is iconic, so that’s what I’m playing on with the uniforms here. White is a symbol that you are presenting yourself in the cleanest way possible with no margin for error. A bartender should showcase his or her skills in how cleanly they can work; it’s impossible to hide clumsiness when you’re wearing a white jacket. 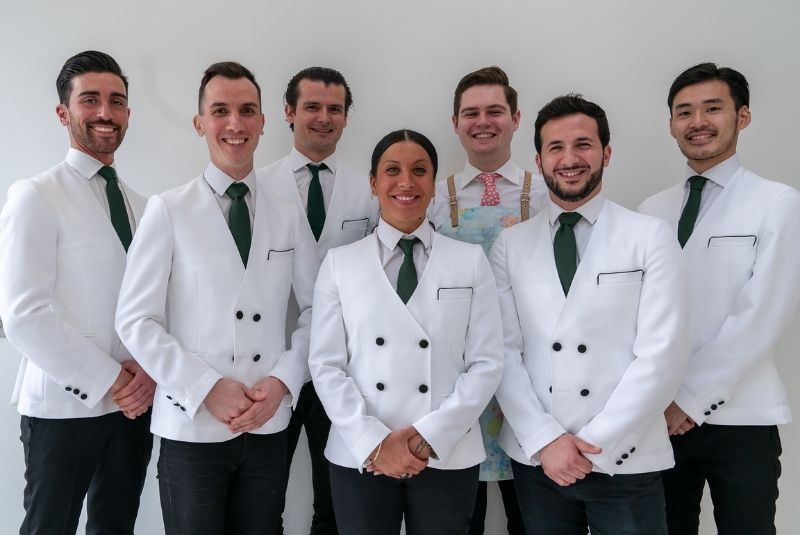 A chef’s table for bartenders

The next thing I’m going to do is invite people into my research and development space, kind of like some restaurants do with a kitchen table. I’m going to put a nice table in there and introduce guests to the process we go through when designing a drink. For example, if we’re lacto-fermenting carrots in the lab, we want you to sample the fermentation at different stages. For some people who are seriously geeky about drinks, I think it will be a lot of fun. Then they can come out into the main bar space to taste the finished product and get a new understanding of our work in the process.

The main thing I love about Kwānt is when people tell me that they notice something new every time that they come here. I genuinely believe that there’s no ‘bad’ table in the bar; they just allow you to see a different part of the space in a different light. And if people keep discovering new things, enjoy the drinks and want to spend time here, that is the most important thing for me.