Seven of the coolest restaurants to visit in New York

Last month Restaurant magazine editor Stefan Chomka visited New York for a 72-hour whistle-stop tour of its restaurant scene. Here are seven highlights from his bite out of the Big Apple.

Where do you eat in New York when you’re only in town for a few days? In a city with a restaurant practically on every corner and with one of the most progressive eating-out scenes in the world, this is not a question that is easily answered, but you can have a lot of fun trying. So, with only 72 hours on the clock – minus a few odd hours for sleep here and there – we delved into Manhattan, Brooklyn and beyond to discover what’s currently shaping New York’s dining scene. Here are our highlights: 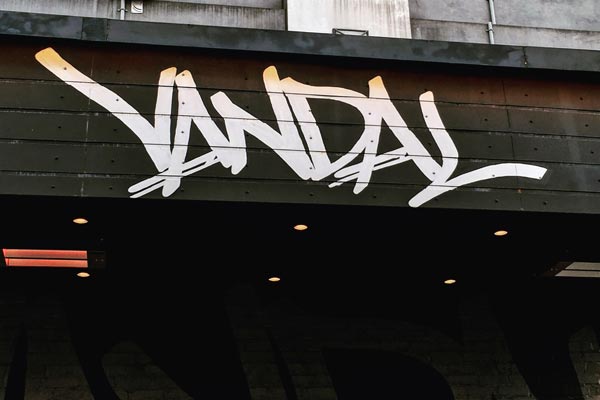 What it is: A Bowery behemoth that opened at the start of the year and is a sprawling mass of concrete, graffiti and people. Lots and lots of people.

What’s the vibe? Think part restaurant, part nightclub – ‘clubstaurant’ in fact, to use the modern parlance. Put it this way, it’s not the place you’d go for a quiet meal for two.

Who’s behind it? It’s from the team that introduced New Yorkers to the hugely popular clubstaurants Tao and Lavo, so it has a good pedigree.

What to eat: Global street food is its game. You can’t go wrong with the chicken katsu and Hong Kong egg waffles. 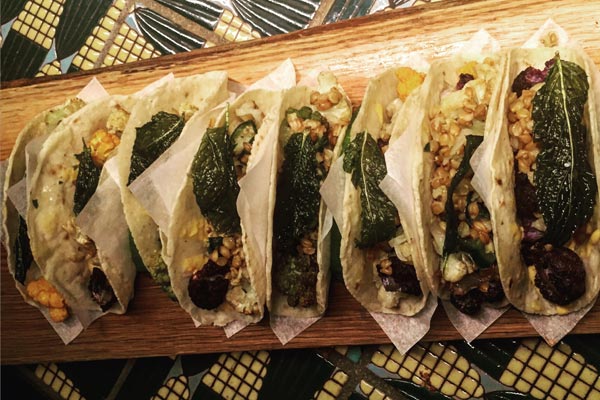 What is it? Not your typical taco joint, this one is run by the brilliant April Bloomfield and Ken Freidman, the duo behind New York gastropub The Spotted Pig as well as the hot spots The Breslin and The John Dory Oyster Bar, to name a few.

What’s the vibe? Salvation Taco is located inside The Pod 39 hotel so it has a more upmarket feel than a trad taqueria. It also has a late-night vibe, with a cracking cocktail bar, and a brilliant rooftop terrace for those long summer months.

What to eat: Tuck into an upscale taco, such as one filled with rubbed Berkshire pork, avocado salsa, cilantro and onions or the veggie-friendly roasted cauliflower with farro piccolo and curried crema. Wash them down with a Michelada, a fiery drink made from lager laced with spicy tomato juice, adobo chilli, fresh lemon juice and chilli salt.

45th Street and Vanderbilt Avenue, inside The Helmsley Building at 230 Park
urbanspacenyc.com/urbanspace-vanderbilt/ 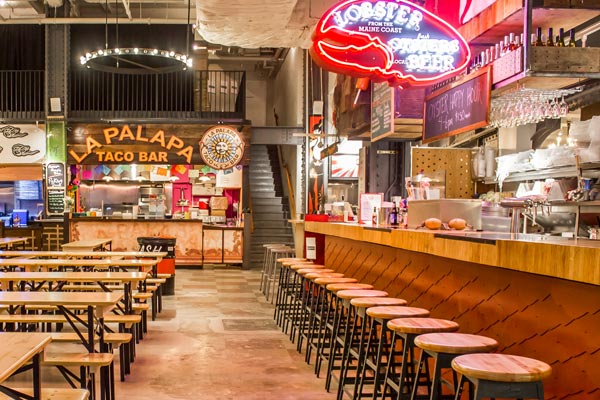 What is it? A grown-up food hall for the 21st century with a central Midtown Manhattan location – a bao’s throw away from Grand Central Terminal, no less.

What’s the vibe? It’s top-class street food in a high-end venue. Basically, with Urbanspace Vanderbilt, people no longer have to trek to deepest Brooklyn for the latest food trend. 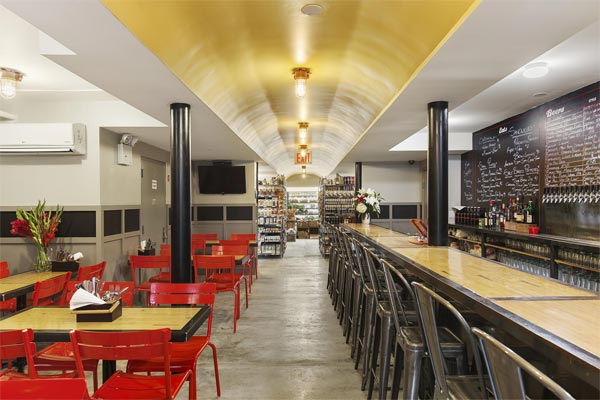 What is it? Part sports bar, part restaurant and part high-end grocer, this Clinton Hill spot has the neighbourhood approach locked down.

What’s the vibe? It’s so relaxed it’s almost asleep. People pop in for a glass of craft beer from one its 16 rotating taps and then engage in some post-drinking shopping of cured meats, cheeses and other deli items, or simply pay a visit on their way home to do a spot of – albeit quite pricey – top-up shopping and to fill up their growler of beer.

What to eat: There are plenty of small plates on offer but what you’ll really want is one of its legendary sandwiches. Choosing between wagyu roast beef with comte and horseradish; Peking duck bahn mi; or the lip-smacking porchetta with broccoli rabe and Parmigiano could be tricky though. 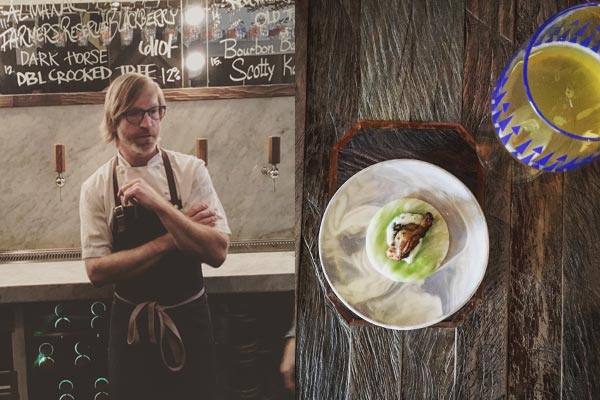 What is it? Greenpoint’s coolest hangout, it’s a beautiful Nordic-styled beer bar at the front with a Michelin-starred restaurant – Luksus – hidden at the back.

What’s the vibe? Cool, minimal and oozing style, Torst is the antidote to the more rough ‘n’ ready craft beer bars that can be found across the city.

Who’s behind it? Danish brewer Jeppe Jarnit-Bjergso and chef Daniel Burns, who spent three years running the pastry department at Noma and then moved to New York to open Momofuku’s test kitchen for David Chang before launching his own venture in 2013.

What to drink: Beer. Torst features an extensive range of draught brews – 21 in fact, which are changed on a regular basis – all of which are served in delicate stemware as wine might. Beers are sourced locally and from other parts of the US as well as countries such as Italy, Switzerland, England and Denmark. Indeed, Burns believes that Luksus is the only Michelin-starred restaurant in the world to serve only beer on its alcohol list. 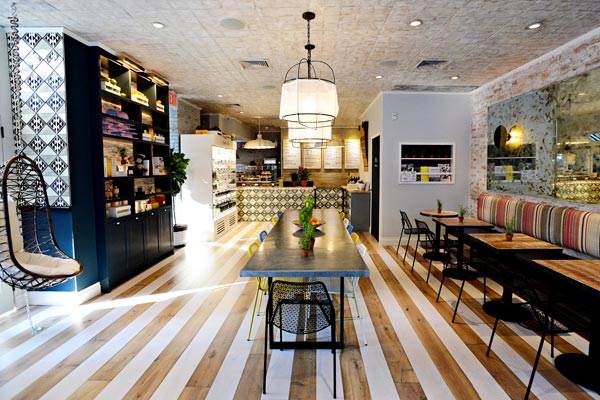 What is it? A vegan restaurant that has taken Greenwich Village by storm.

What’s the vibe? Where people on Bleecker Street once queued outside Magnolia Bakery of Sex and the City fame, they now line up outside no-reservations restaurant By Chloe instead, swapping cupcakes for cold pressed juice, dairy-free ice creams and tempeh-lentil-chia-walnut patties.

Who’s behind it? It’s named after lifelong vegetarian, chef and cookbook author Chloe Coscarelli. It is part of the ESquared Hospitality and is the group’s first quick service restaurant.

Need to know: By Chloe may be tiny – it has a central table that seats 11 and it can accommodate another 10 on tables to one side of the room – but it can serve 1,000-1,400 customers a day, so be prepared to queue. 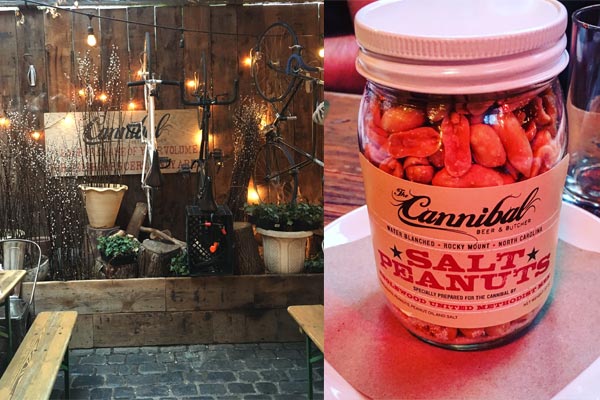 What it is: A gastropub that takes its meat very seriously. Very seriously indeed. And its beer, too.

What’s the vibe? You walk past the well-stocked beer chillers (it stocks 350 different beers from all around the world) on your way into this narrow restaurant that has a number of different rooms, each with their own style. It’s dark, moody and loud, and very, very good fun.

On the menu: Cannibal’s menu is rooted in US charcuterie as well as a nose-to-tail approach to cooking. It specialises in group dining with whole animal feasts, so order either a whole pig, goat or lamb and tuck in. If that doesn’t get you salivating, try the pig’s head with pancakes or garam masala lamb belly with naan bread.