SingleThread in Healdsburg, California, has won the Miele One To Watch Award as part of The World's 50 Best Restaurants 2018. Here's why...

Kaiseki dining is considered one of the world’s highest culinary art forms in which a chef organises a hyper-seasonal set menu hinged on balance, with respect to ingredients’ colour, texture, temperature, taste and cooking method. That’s precisely what diners will encounter at SingleThread: delicate, detailed dishes that are thoughtful without appearing overly fussy, served in a comfortable 52-seat dining room with a direct view into the restaurant’s open kitchen. There, Kyle subtly enriches a marriage of local plants and proteins plus less common Japanese produce with umami-boosting flavours like miso and koji for a unique California kaiseki spin.

Thanks to two Michelin stars and a Relais & Châteaux accreditation right off the bat, word is spreading about year-and-half-old SingleThread and its exquisite dining and lodging experience. Below, why this California ryokan is the Miele One To Watch 2018.

A new, but really old, approach to hospitality

Omotenashi is a Japanese word which represents an approach in which a host goes above and beyond to anticipate a guest’s needs. This sense of thoughtfulness serves as the thread that binds SingleThread as both a restaurant and an inn. Kyle himself might bring a guest to his or her room (there’s no formal check-in process), while quarters are stocked with complimentary amenities like binchotan charcoal toothbrushes and thin-lipped Zalto stemware (the gold standard for wine consumption around the world). 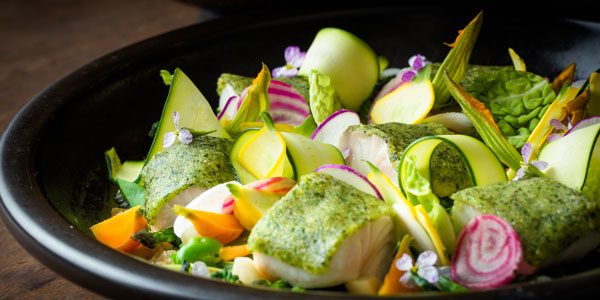 Summer vegetables from the farm

A carefully arranged wooden board dressed with patches of moss and any number of small, umami-laced dishes – typically around six to eight per guest – teases a taste of Northern California’s seasonality and serves as the first welcoming course at SingleThread. The display is rooted in kaiseki, and the cuisine’s myriad tiny, intricate dishes centered on seasonal products treated to heighten ingredients’ natural flavour.

While SingleThread supports a number of local producers, sourcing berries from Middleton Farms and heirloom garlic from Bernier, much of the produce a diner will sample throughout a meal is plucked from the property’s five-acre farm, which winds through greenhouses and chicken coops, and extends to bee hives and land with hundreds of botanicals. Of course not every plant Katina grows is Japanese, but much of it is, with a particular attention to fruits and vegetables from the Kansai Region around Kyoto. Think kano nasu eggplant, shishigatani pumpkins, and a long Japanese onion called kujo negi. The flower of the plant serves as SingleThread’s logo, and it’s the only variety Katina grows all year long.

Elevating the art of donabe … in bed

For guests who spend more than one night at SingleThread, Kyle recently launched a multi-course in-room dining program centered around classic Japanese hot pot donabe cookery. A series of small seafood and veggie-centric seasonal starters commences a meal, which then leads into a sashimi course. A communal donabe focused on seafood or land animals follows, with a succession of pickled vegetables and condiments, plus, of course, rice. To finish, a donabe dessert inspired by the time of year. 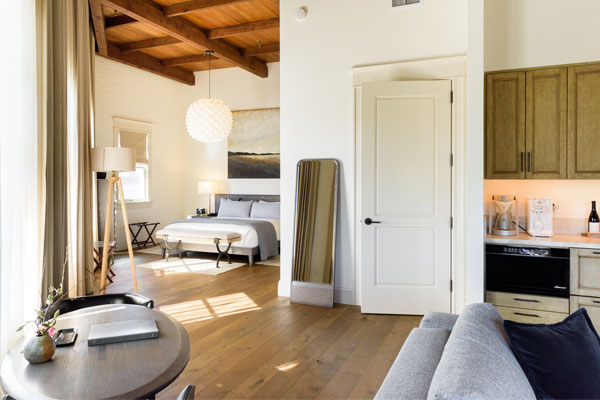 A room at the inn (image: Kassie Borreson)

While hotel breakfasts often taste like an afterthought, SingleThread adheres to the Japanese ryokan tradition, offering guests an extensive and elaborate in-room spread of the region’s best seasonal ingredients executed with as much care as dinner. Options include multi-dish set menus dedicated to Sonoma, England and Japan, the latter of which could incorporate dishes like sweet potato donabe rice and fresh yuba with barrel-aged ponzu.

It’s not every day that a complimentary mini fridge comes stocked with one of the world’s most elusive beers. Local Russian River Brewing Co.’s Pliney the Elder IPA is just one of the gratis items, along with Revive Kombucha, Kimino Sparkling Yuzu soda, and daily spun, house-made ice cream that fill guests’ fridges. There are also snacks made by local craft producers, plus a bevy of high-quality bathroom products, from Marvis toothpaste to Botnia skincare products and Aesop shower goods. It all comes back to the notion of omotenashi, generously stocking guest rooms with an abundance of quality products.

An affinity for craftsmanship

One of the hallmarks of many Japanese establishments, be it a tea room or restaurant, is the lack of commodity goods, which could be anything from cups and plates to rugs and artwork. SingleThread, too, embraces the Japanese affinity for wares made by shokunin, the Japanese word for craftsman – from in-room mugs designed by Japanese ceramicist Mitsuko Siegrist to stunning hand-formed knives by Bloodroot Blades.

Go inside SingleThread with Kyle and Katina Connaughton:

The Connaughtons will collect their Miele One To Watch Award for SingleThread at The World's 50 Best Restaurants, sponsored by S.Pellegrino & Acqua Panna, on Tuesday 19th June in Bilbao, Spain. Watch the livestream on Facebook and follow 50 Best on Instagram, YouTube and Twitter for more photos, videos and interviews.