Having led her team to victory in The Art of Hospitality Award at Latin America’s 50 Best Restaurants, Malena Cardiel outlines how they do things differently at Rio de Janeiro’s premier dining destination

Lasai may have established itself as one of Brazil’s most exciting restaurants based largely on chef-owner chef Rafa Costa’s culinary brilliance, but don’t let that fool you. The restaurant’s elevated status – it sits at No.74 on the extended list of The World’s 50 Best Restaurants – is just as much a result of its ethos of hospitality, engagement and on-point service, led by Malena Cardiel.

Costa and Cardiel are married to each other and to their shared business – as well as being devoted parents to their young son, Emiliano – and their partnership provides the driving force for Lasai’s unique blend of innovation and classicism in both the kitchen and dining room. “What we are doing has always been different,” says Cardiel, who oversees front of house operations. “When we were opening [in 2014] and I was training the staff I barely spoke Portuguese, but I knew they thought I was crazy!”

Now the Mexican-Brazilian couple and their team are the proud recipients of The Art of Hospitality Award, presented at Latin America’s 50 Best Restaurants 2019 awards, sponsored by S.Pellegrino and Acqua Panna, in October. Here, Cardiel and Costa identify the factors behind this success.

1. Service not servitude
Though she describes herself as Mexican, Cardiel was born in Texas, trained in New York and then worked in Spain for many years, rising to become a maître d’ at the acclaimed Mugaritz in San Sebastian. When she moved to her husband’s home country to open Lasai, she was taken aback by the approach many customers had to front of house staff. “In Brazil, people who work on the service side are often seen more as servants. This is not the case: it’s a career, we train for this,” she says. “From the start, I tried to teach our team to show respect, but also to respect themselves as professionals too, to expect respect back and to believe they are equal with the customers.”

Cardiel’s philosophy has evidently paid off, with the hospitality at Lasai regularly garnering special praise from both Brazilian and international guests. “Now some of our staff who have moved to other restaurants have taken that philosophy with them, so maybe here in Rio we have made a bit of a difference,” she adds modestly.

2. A refreshing drinks offer (led by a woman)
The team likes to play around with the drinks pairings for Costa’s super-fresh, nature-led menus by incorporating local beers, cocktails and juices. “We have lots of fresh fruits here in Brazil that are very different, so we include fruit-forward and vegetable-forward beverages,” says Cardiel. Lasai’s sommelier, Maíra Freire, has also instigated changes in the wine list to feature more natural and biodynamic producers, including many from Brazil. “To have a woman in charge of the beverages, that’s a big deal here in Brazil. Maíra has refreshing ideas and she has made them work,” says Cardiel. Wine tastes also tend to be quite conservative, but Freire’s original list demonstrates that natural wines can also be well-balanced and popular.

3. Tasting menus in T-shirts
Service in fine dining restaurants in Brazil is usually very formal and structured – but not at Lasai, where Costa creates a daily-changing tasting menu that majors on the freshest local seafood and vegetables. The staff are encouraged to engage in friendly, relaxed conversations with customers. The casual vibe seeks to reflect the city in which they operate. “Rio is a rich city, but it’s also very casual. We have people coming in wearing T-shirts, shorts and flip-flops and they are welcome.” 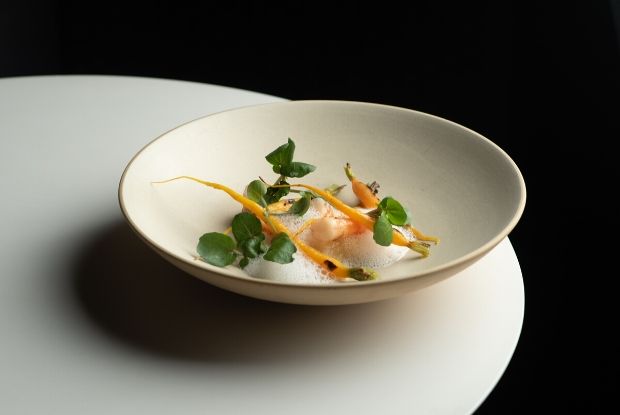 A dish from the new menu at Lasai

4. A vision of Christ
The restaurant’s terrace offers stunning views of Rio de Janeiro, taking in the famous Art Deco statue of Christ The Redeemer that towers about the city. After a mini refurb to the second-floor area, guests can relax on sofas outside, or hire the large communal table inside for private dinners or small events, with a view of one of the Seven Wonders of the World. “When we opened, we didn’t even have enough money to finish the floor,” Costa interjects. “We got the call about being on the [Latin America’s 50 Best] list in 2015 and things have snowballed from there. Now we have everything we need in the kitchen and in the dining room.”

5. Tranquil by name...
Lasai means ‘tranquil’ or ‘calm’ in Basque – the language of the region where Costa and Cardiel worked together for many years. The name reflects the calm atmosphere in the dining room, which succeeds in making guests comfortable, above all. “The feedback from our guests is that they feel at home. Our goal was always to create a space where people can escape from what’s outside,” says Cardiel. The couple also work in seemingly harmonious partnership. “We got all our fighting out of the way when we worked together in Spain!” says Cardiel. “And we have mellowed since we had our son, too,” adds Costa. “It puts things in perspective.”

The Lasai team also plans to open its first restaurant outside Brazil in London in 2020. A more casual version of Costa’s healthy vegetable-led food will be served in a sharing-plates format in a yet-to-be-confirmed location in the UK capital.