A neighbourhood cocktail bar with hedonistic disco vibes coursing through its veins, Epic is making a name for itself beyond China as it is named the Campari One To Watch. Ahead of the virtual ceremony for Asia’s 50 Best Bars on 6th May, cocktail writer Elysia Bagley meets Epic’s founder Cross Yu, who shares how he and the team have spent six years living and breathing their mantra of being simply 'epic'

Ask any bar aficionado in China to name five must-visit bars in Shanghai and there’s little doubt Epic will make the list every time. Helmed by industry veteran and Shanghai native Cross Yu, it’s a cornerstone of the country’s burgeoning cocktail culture, with a reach and reputation that live up to its telling name.

This year may mark the first time Epic has stepped into the continental spotlight, but it is one of a handful of cocktail bars that has defined China’s increasingly progressive scene. The bar opened in late 2014 alongside Shanghai stalwarts such as Shingo Gokan’s Speak Low and Yao Lu’s Union Trading Company; a period seen as a foundational heyday for Shanghai’s cocktail culture. In a highly competitive city that’s notorious for rampant F&B turnover, to still be standing after six years is a feat few would be shy to celebrate. So, when it comes Epic’s story, being named the first mainland Chinese bar to win the Campari One To Watch Award adds a new level of excitement to its ascent – especially given the battle so many fought to stay afloat in 2020.

Take an Epic journey and discover this rising-star bar:

Yu came up as a bartender just as Shanghai’s scene began to show signs of life around 15 years ago, when cocktails bars were still scant in the city. When the opportunity arose to open Epic, his background in hotel bars, fine dining and clubs helped him zero in on three key factors that were most important to him in developing his own concept: music, space and staff; all of which still define the bar today.

There’s the disco soundtrack – Yu’s affinity for funk has become somewhat of a trademark. The choice of tunes was not only about personal preference, but a bit of nostalgia. Chinese party culture is always associated with the word ‘disco’, and he wanted to mesh that mentality with a cosy, vintage-inspired space to create something altogether laid back and old school; a place to become a lively home away from home for guests. The vibe is polished off with Epic’s eclectic spray of street-style artwork from its house artist ‘Ben’, who has created the bar’s edgy visuals for over five years.

And then there is what Yu champions the hardest: his all-local staff, which is a point of particular pride for him in being Campari One To Watch – they are China through and through. Many have been with him from the get-go, and those who have moved on come back for shifts each year during the bar’s anniversary parties. In a country where service staff are often quiet and reserved, Epic has spearheaded personal and upbeat service. 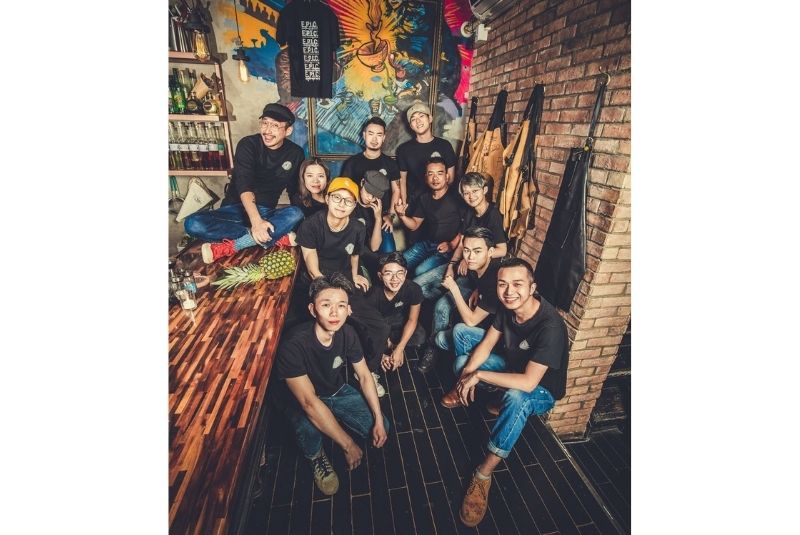 “From the beginning I told my whole team, ‘Hey guys, I really want you to be open. You don’t have to be so serious!’ Bartenders in China can be so shy – I was once a shy guy myself, but through my experience working in clubs, restaurants and bars, I created my own more open style of service. Open doesn’t mean no standards – it just means you don’t have the same standards for every guest. It’s about being fun but respectful; treating each person as a friend from the moment they sit down and chatting as you hand them the menu.”

When it comes to that menu, Epic’s cocktail programme isn’t one that fits in a box, it’s whimsical and unchained. Initially focused on twists on classics, it soon took on a what Yu calls a ‘freeform’ approach; each year playing with different techniques and trends and defying the rules with zany creativity. And you will always find a twist on Yu’s signature Espresso Martini. 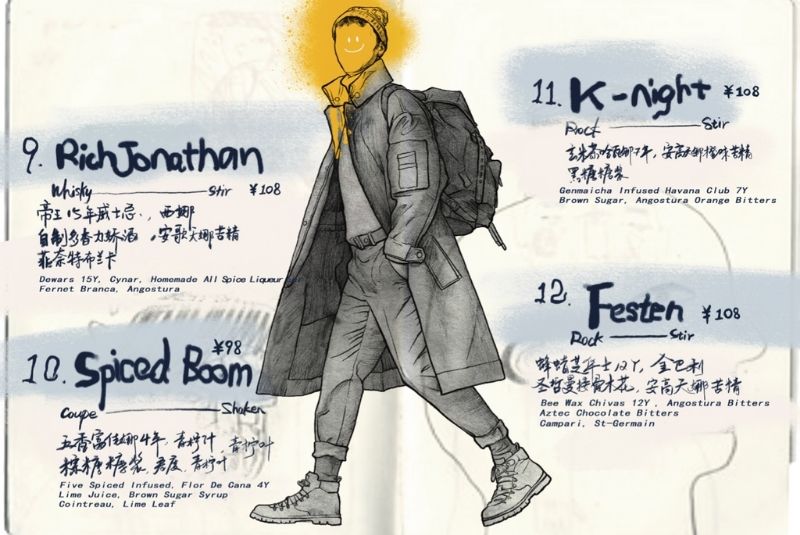 The eclectic and beautifully designed menu

“The menu showcases the kinds of things that represent us, but in truth, 50% of guests ask for the bartender’s choice,” Yu explains. The team reserves a portion of the back bar for more experimental off-menu ingredients, which they use for these bespoke drinks. “We often write down bespoke recipes on the back of napkins with the guest’s name, signature and the date, and then they take a photo. If they’re traveling and miss their own drink, they can show the bartender the recipe and recreate a taste of home.”

This small gesture is evocative of Epic’s core philosophy: everything comes back around to the guest, many of whom have been coming since it opened six years ago, collecting memories along the way. Yu witnessed the first encounter between a guest and a special partner, serving them over the years as they married, had children and together built a life that all began at Epic. Sentimental, yes – they’re proud to call it a community bar, and as a tribute, the team selected four members of that community who each inspire a section of their current menu.

There’s Jonathan, a discerning drinker who doesn’t want to sip the same thing all night. He starts off with something fizzy and moves on to a sour, ending his night with a complex and bitter kick from Festen a blend of Campari, Yunnan beeswax-infused Scotch, elderflower liqueur and chocolate bitters. Then there’s Zoey, who likes snacks with her drinks – a brunch of oatmeal vodka shaken with blueberry marmalade or a TNT tipple with spicy Sichuan beef jerky gin. Xiao Man is a guy who’s in for easy-going drinks: say, a jujube-coffee gin and tonic. And finally the bold-and-chic Kitty, who likes things lush, sipping oolong pisco with bubbles and rose gin sours. 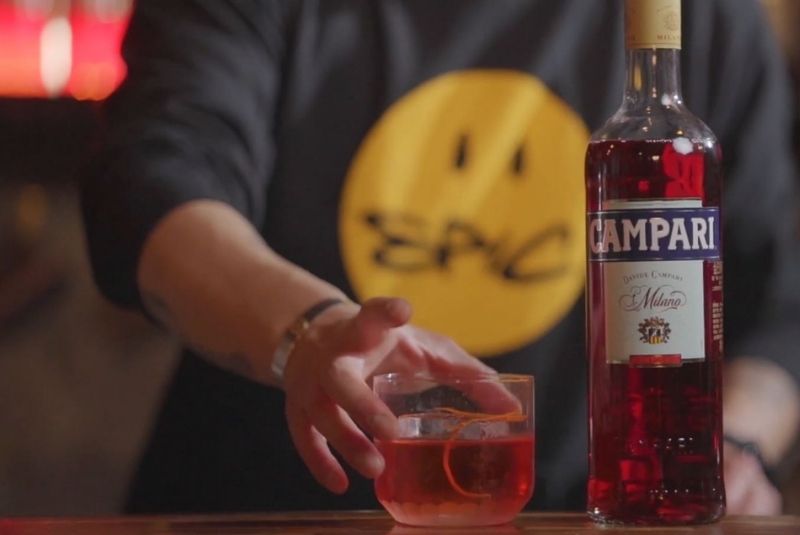 Over the last couple of years, Epic has really come into its own. China’s industry remains a bit of a bubble to the rest of the world and Yu has made it his mission to make noise that will be heard beyond the country’s borders. For him, this award opens a door for the team that leads to the rest of the world. “It shows that people around the globe are beginning to know who we are and watch what we do. It also means a lot of responsibility for the team in the future – we have to be better and better,” he says.

In this stage of rapid development for China’s bar sector, Epic is a representation of its past, present and future. Yu and his bar have, in one way or another, been there for it all – they want the world to see how far it has come and share what China’s bartenders are all about.

“China’s cocktail culture is growing so fast, and Shanghai has advanced to a level where you can experience something quite special while at the same time enjoying the benefits of an international city where everything is easy, accessible and ultra-modern – that’s the whole country’s focus at the moment,” Yu explains. “There are a lot of bars that really hit these marks with their playlists, drinks, service and design.” When it comes to Epic’s future and the road ahead, he’s determined bring in more bartenders from around Asia to experience this for themselves. 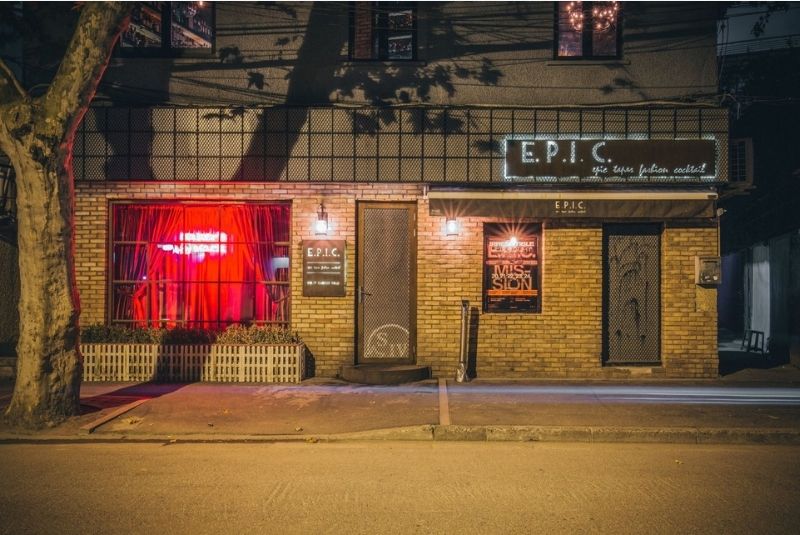 Ultimately, the goal remains the same as the bar’s slogan demands – Do Epic Sh*t! “Anytime the bar or a team member receives recognition, my words are always the same: ‘you need to go back to the start of it all’,” he says. “You go back to the bar, put on your uniform and serve your guests as best you can; you take care of them, help them have fun and be great at what you do. That’s who you are, and that’s what’s important.”