The latest edition of the Asia’s 50 Best Bars list was revealed at an awards ceremony held at the Capitol Theatre in Singapore on Thursday 9th May, culminating in the announcement of a new winner for the title of The Best Bar in Asia, sponsored by Perrier. Learn more about the new No.1, The Old Man in Hong Kong, and the other bars that made the top ten, then discover the full list on the Asia’s 50 Best Bars website. 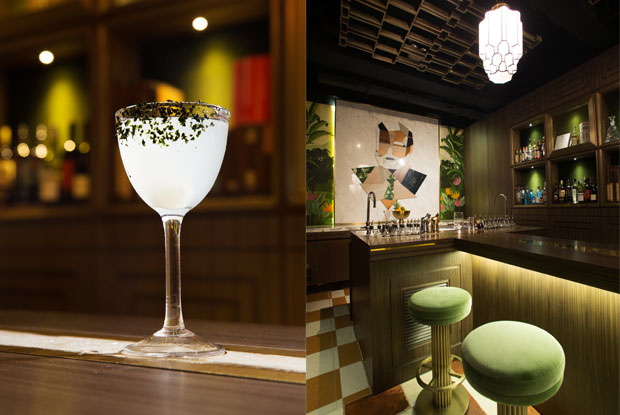 ‘A Farewell to Arms’ and the interior of The Old Man

Despite only opening in 2017, this year’s No. 1 has made waves across Asia’s drinks scene. An abstract, geometric portrait of Ernest Hemingway assembled from surplus building materials leftover from The Old Man’s build three years ago casts a watchful eye over curious imbibers who sip on drinks flavoured with lacto-fermented raspberry and beeswax-infused bourbon. Inspired by the American novelist’s worldly travels and penchant for proper potations, and named after his 1952 Pulitzer Prize-winning novel, The Old Man and The Sea, here co-founder and head bartender Agung Prabowo has built a concise list of libations inspired by the author’s favourite drinks, spirits and flavours. 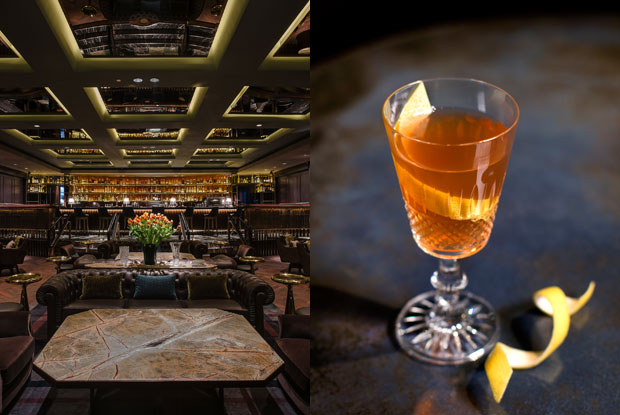 Paying liquid tribute to one of the world’s greatest conurbations, Manhattan – within the Regent Singapore – and its current cocktail menu celebrate the 19th century’s golden age of drinking through the iconic libations born of the era. Hued with warm tones, the grand lounge melds Old World glamour with luxe contemporary comfort via velvet arm chairs, rich drapery and mahogany tables. A fitting backdrop to sample over 150 rare American whiskies, or a solera-aged Negroni produced through the bar’s onsite rickhouse - the first for any hotel around the world. 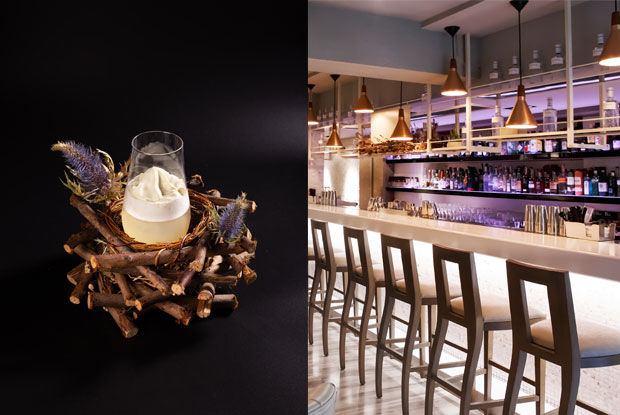 Winter Forest and the interior of Indulge Experimental Bistro

Indulge's owner Aki Wang is at the forefront of Taipei's dynamic cocktail scene with an approach that takes international bar trends and gives them a Taiwanese twist. Witness the signature Spring Awakening, inspired by the island’s micro-seasons, with Japanese gin, Cointreau, bergamot and the unusual addition of Yakult. Other highlights at the chic, purple-lit bar include the 1795 Old Fashioned and Ruby Black (black tea liqueur and single malt whisky with beetroot, raspberry, rose and citrus reduction), while the modern European food menu is another reason to settle in. 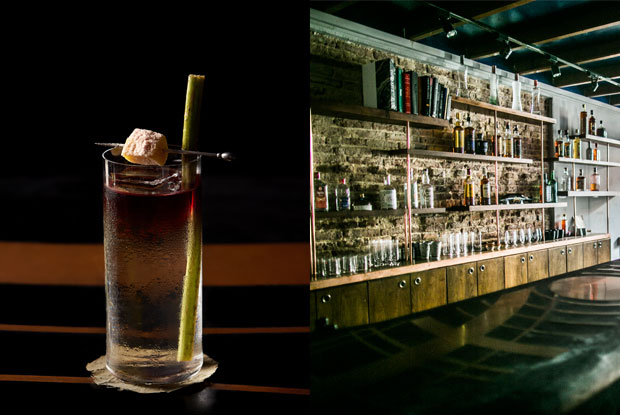 A cocktail by Mudaliar and inside Native

The second-highest ranked bar in Singapore and only just celebrating its third anniversary, Native takes its inspiration from the local and regional landscape, serving cocktails with foraged ingredients from jasmine blossom to turmeric leaves. The brainchild of mix maestro Vijay Mudaliar, it's a boundary-pushing approach which results in highly original drinks such as Antz – a mix of Thai rum, aged sugarcane, tapioca and soursop topped with ants on a frozen basil leaf. The vibe is relaxed with apron-clad staff at the stripped-back brick bar happy to chat with customers about the exotic ingredients. 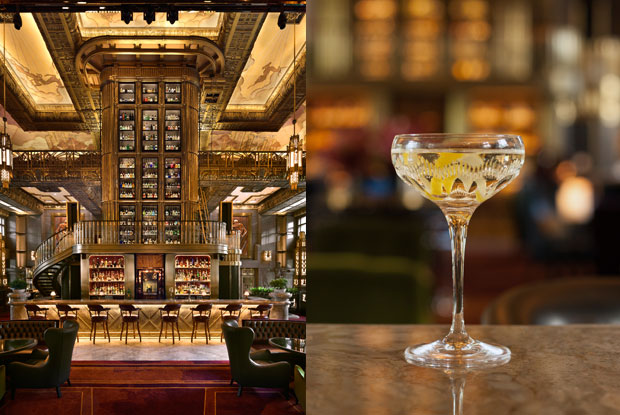 Gin and Champagne lovers are in for a treat at this grand Art Deco lobby and bar in Singapore's Bugis neighbourhood. More than 250 Champagnes and 1,000 gins are available from the towering gilded bar, with the latter put to work in a collection of cocktails inspired by the roaring 30s. Try stand-out Atlas Martini, made with London dry gin, Ambrato vermouth, orange bitters and champagne vinegar, made with London dry gin, sloe berry gin, pineapple, Italian sweet vermouth and Champagne, or the delicious Coloured Rhythm, with floral gin, elderflower liqueur, cedar wood, lemon and the fascinating ‘coloured sweetness’. 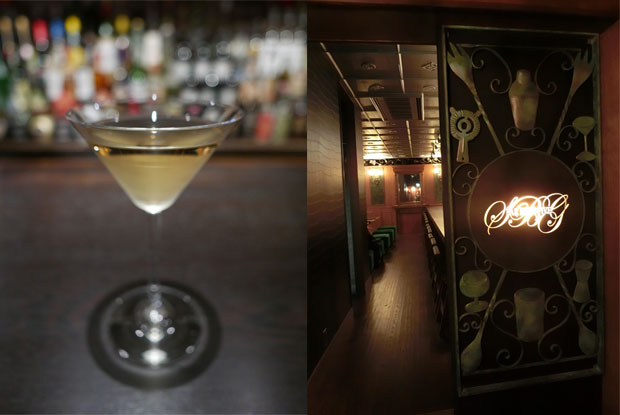 Bamboo Cocktail and the entrance to High Five

It's high fives all round for this sleek, low-lit bar, which has received widespread acclaim thanks to the drive of owner Hidetsugu Ueno. A move to larger premises has done nothing to dampen the bartender's fire with the same inspired approach to cocktails, plus a 200-strong whisky list. Ueno's Bellinis, Singapore Slings, Martinis and his signature White Lady remain a benchmark, while classics such as Ceremony – J's whisky, green tea liqueurs, and matcha bitters – and Bamboo are as popular as ever. 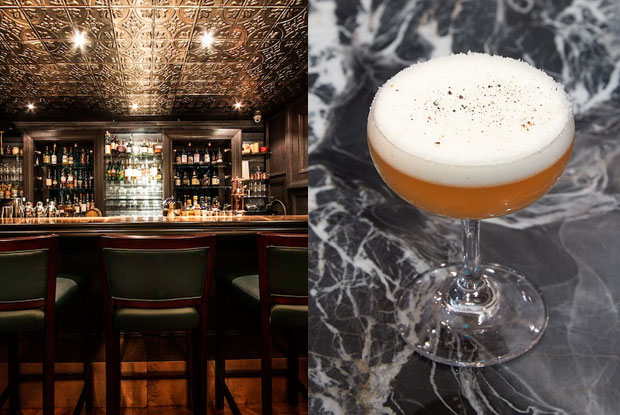 The interior of Speak Low and a Parmigiano Sour

The secret entrance to Shingo Gokan's standout bar might no longer be a secret, but its mystique still reigns strong. A slide-away bookcase in a cocktail equipment shop leads to a funky space that wouldn't look out of place in downtown Manhattan and serves fine-tuned signature serves and well-wrought New York staples. The second floor is more refined with rarefied spirits and Japanese-style attention to detail. Don't miss the eponymous Speak Low cocktail, featuring Bacardi Superior, Bacardi 8, Pedro Ximenez sherry and matcha.

No.8 The Bamboo Bar at Mandarin Oriental, Bangkok, Thailand 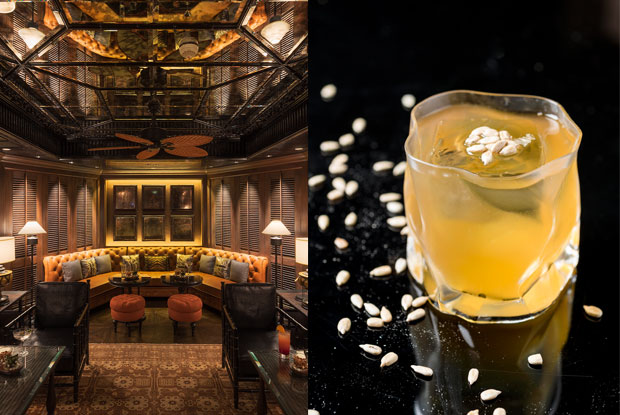 Inside The Bamboo Bar and the cocktail ‘Birds, Bees and the Trees’

The Mandarin Oriental hotel's bar has been a sanctuary for music lovers ever since it opened in 1953, with live jazz still a prominent part of the experience today. Combining bamboo furniture, tiger skin prints and polished service, the room has an exotic, club-like feel. Long-standing libations, such as the Thaijito, are joined by music-inspired creations including Riffin' The Scotch – Johnny Walker Gold, mushroom, pear and agave – which 'breaks the barriers,' much like Billie Holiday did for the jazz oeuvre. 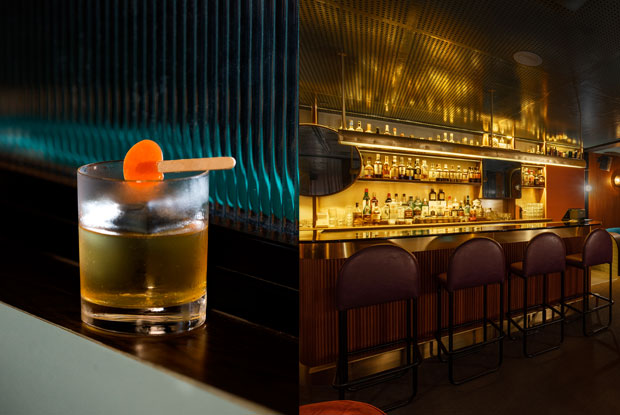 Madame President and the interior of Jigger & Pony

You won’t find liquid nitrogen and smoke guns at this charming bar, which goes about its business in a refreshingly old-school way. The distinguished dark wood counter is dedicated to classic and vintage cocktails from a killer Martini and soothing Moscow Mule to a Ramos Gin Fizz that would get nods of approval in New Orleans. Staff, headed by Jerrold Khoo – whose mantra is that customers must leave happier than when they came in – are warm and welcoming and there’s a buzzy atmosphere that’s convivial but never rowdy. 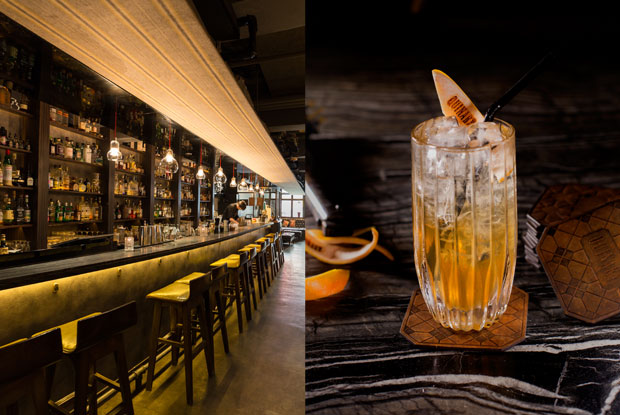 Inside Quinary and the signature Oolong Tea Collins